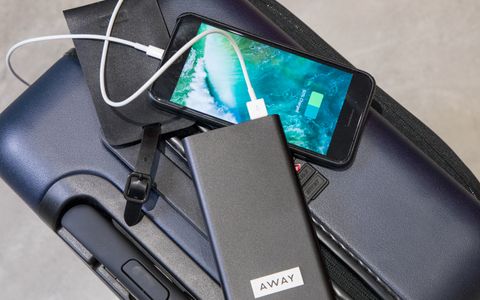 The Away Bigger Carry-On with Pocket is a well-designed smart suitcase with plenty of room and a removable battery for charging your gadgets.

Away is one of the biggest brands in the newly burgeoning Smart Luggage category. Yes, even the suitcase you take on vacation is getting tech-y features. The standard feature on all smart bags is a portable battery that snaps into the suitcase, so you're not scavenging for an outlet at the airport if you need to charge your phone. Away also sells an optional accessory that allows you to track your bag in case it gets lost.

The new Away Bigger Carry-On with Pocket ($295) adds an incredibly sensible feature: a nylon pocket. Why is this simple adjustment so important? It enhances the convenience factor of Away's suitcases, which feature an easy-to-use portable power supply for charging your phone, so you can keep your laptop and important documents within close reach.

On the downside, this pocket costs $50 extra, and that version of the Away isn't available in as many colors. Still, I found the Away Bigger Carry-On with Pocket to be an excellent, albeit pricey, way to travel.

What about that TSA ban on smart luggage?

So, you might have heard about American Airlines, Delta and Alaska Airlines instating bans on smart luggage at the end of last year. But fear not, traveler, not all smart suitcases are banned, only the ones with non-removable batteries. That means the current set of Away's luggage is free to fly the friendly skies, as its battery is easily ejected.

Away's luggage has long stood out for its elegant minimalist designs and for an ever-changing series of hues that were either eye-catching or elegant. Although I liked the dark, restrained blue (the pocket-bearing Away's colors  come in only black or blue) of the bag I tested, I'm a much bigger fan of the purple tone they've used in luggage released in partnership with Kode With Klossy, the coding summer camp from model/entrepreneur Karlie Kloss.

The Away's shell is made of a durable-feeling polycarbonate material that the company calls "unbreakable." A leather hinge on its spine reinforces the connection between its halves. Its 360-degree wheels did an exceptionally good job of rotating to the correct position, which I admit is kind of a challenge when you carry your luggage as hurriedly as I do. The rubber handles at the top and right of the Bigger Carry-On feel reliable. Raden loves to promote the durability of its luggage, with video of someone standing on it, and leaning in, seemingly trying to break it.

The Away's pocket is a nylon sleeve that measures 16.5 x 11.25 x 1 inches. That's big enough to fit my 2012 15-inch MacBook Pro, which is thicker than current models, but I instead opted to store my shampoo, body soap and face wash container bag in that sleeve, as that's equally important to have at the ready. The Muji and Raden bags have no such pockets.

After you unzip the Bigger Carry-On, you'll notice a mesh window can zip up the front half, and that there's a flat divider between both sides that offers a zipper-closed pouch. So, if you buy the Carry-On or Bigger Carry-On without the exterior pocket, you still get a place to store sensitive materials, but it's less accessible. Two buckles can secure that flat pocket against whatever is under it.

The insider lining of the suitcases are nylon, with zippers that run from the top to the bottom. This is because Away suitcases come with a lifetime warranty, and the nylon and zippers cover up the panels where Away's repair technicians  access handles and feet, if a repair is ever needed.

What's in the box

When I opened the large cardboard box with the Away Bigger Carry-on, I was pleasantly surprised to see the luggage came inside a canvas bag. While it seems like a great way to keep the Away clean while it's stored away, I could also see college students using it for an oversized laundry bag.

Inside the bottom half of the Bigger Carry-On, you'll see a small buttoned-up pouch containing a small bag, which I used for laundry during the trip. My extensive testing showed that this bag can fit two dress shirts, five T-shirts and five pairs of socks and briefs. Also, Away includes a USB-based power adapter and a micro-USB-to-USB cord, for charging its battery.

The major perk of the Away luggage is the 37-watt, 10,000 mAh portable charger that sits conveniently in a slot below the handle, with a cover to protect its ports from spills A 10,000 mAh battery has enough juice to refuel most flagship smartphones completely, and some of them twice. The charger is easily ejectable; you just push down until it clicks, and it then jumps up. The Raden A22's power supply has a smaller capacity of 7,800 mAh.

It draws power from a micro USB port and features dual USB 3.0 ports for charging, with one being a 2.4-amp fast-charging port and the other a 1-amp standard-speed port. Personally, this was a lifesaver at the airport, as it meant I didn't have to run around the terminal, looking for an outlet so I could fill my phone up before a flight.

The portable charger was a lifesaver at the airport, as it meant I didn't have to run around the terminal, looking for an outlet so I could fill my phone up before a flight.

Also, dual ports means you can charge both your phone and your Bluetooth headphones, or one of your devices and one that belongs to a friend, if you're  kind and not traveling solo.

My biggest concern with the Away Bigger Carry-On was that Away was sure that the bag would be allowed on flights. I was not as confident, because the bag's measurements exceed the advertised baggage limit of 22 x 14 x 9 inches  that airlines declare online and at the gates, where they present the small compartment to check your bag's size.

Away says the bag would fit and be allowed on most planes, because the bin you check your bags in is larger than the advertised measurements. After a series of emails with a Delta employee named Michael, who couldn't clear up this question, I bit the bullet and decided to test the Bigger Carry-On to find out what would happen if I tried to get it on a plane. My concern was for naught, as the flight attendants on my Delta plane from New York to New Orleans didn't bat an eye at my luggage.

The Bigger Carry-On's capacity is 6.2 liters more than that of the Carry-On, and as someone whose suitcase was packed to the brim upon his return — I had to bring back beignet mix from the world-famous Café Du Monde — I was happy to have that space.

If you're worried about prying hands opening your checked luggage, you've probably breathed a sigh of relief at the sight of the TSA-approved combination lock.

I had no trouble setting a three-digit combination code on the lock, and locking the suitcase is as easy as snapping its zippers into the dual grooves at the top of the suitcase, near the keyhole that TSA agents can easily unlock. The Raden and Muji bags have similar locks.

Away has partnered with the Bluetooth tracker-maker Tile for a $30 Tile Luggage Tag, which works by logging its location when its within 100 feet of the paired smartphone, and when any other Tiles come within that  range. From Tile's app, you can set your tracker to ring when it comes within the range, or instruct your phone to send a push notification when the Tile tracker is found.

At the baggage claim, I got a notification on my phone shortly before it appeared on the carousel, and could hear the tag's ringing chime as it came out of the entrance.

After I checked my bag for my return flight, I set it to alert me when the bag's location was next detected. I got my first notifications when the flight was getting closer to taking off, as the suitcase was loaded into the belly of the plane. At the baggage claim, I got a notification on my phone shortly before it appeared on the carousel, and could hear the tag's ringing chime as it came out of the entrance.

The Muji suitcase has no battery or location tracking, while the Raden includes built-in location tracking, and uses a similar group-based GPS tracking. The Raden can also weigh itself, which is helpful for those who overpack but also want to reduce fees at check-in.

While you could place a Tile tracker and a portable charger inside  any suitcase, the Away Bigger Carry-On with Pocket streamlines the process completely. The amount of care that's gone into this design shows, and the simple move of adding an easy-access pocket has made the bag all the more convenient.

The Muji bag is a more-affordable $160, but it carries less luggage and doesn't include the portable battery or a place to easily access it. The $295 Raden packs more built-in smart features, but isn't as spacious. The Away, though, especially with the Tile tag, does a lot to take the pain out of going to the airport.