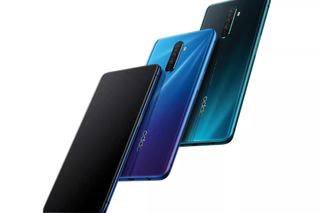 Behold! Here's the fastest charging phone in the planet, capable of fully loading its 4,000mAh battery in just 31 minutes and 31 seconds: the Oppo Reno Ace.

That’s 1 minute and 31 seconds slower than what the Chinese company claimed — back in October it said that the Oppo Reno Ace would take 30 minutes. But The Verge tested this claim and found that that, by 30 minutes, the phone had reached “only” 99% of its capacity. At 30 or 31 minutes, it’s still an amazing feat.

According to The Verge’s test , you can get 57% in just 15 minutes. Heck, five minutes of charge will give you a full 10% of charge, which is great in case of one of those “hey, could you please let me use that plug for five minutes, my phone is about to die” moments.

The Oppo Reno Ace continues the company’s obsession with charging its phones as fast as possible. In the past, Oppo has claimed previous records with its Find X phones. The Find X Lamborghini edition was able to fill its 3,400mAh battery in 35 minutes.

Other Chinese companies, like Huawei, Xiaomi, OnePlus and Vivo, are also involved in this fast-charging arms race. The latter claimed in June that it had developed a 120W technology that only takes 13 minutes to fully charge a 4000mAh battery like the one in the Oppo Reno Ace. But Vivo has not deployed this tech — called Super FlashCharge 120W — in any commercial product yet.

The Huawei Mate X has a 55-watt fast charging tech, taking a battery from 0 to 85% in just 30 minutes. But that could be considered a niche phone. Something like OnePlus 7T offers speedy charging too: its so-called Warp Charge 30T. The claim of the Oneplus is more modest, taking its 3800mAh battery from 0 to 70% in 30 minutes.

Oppo’s charging technology — called Super VOOC 2.0 — uses a two cell design, which allows it to charge these blocks simultaneously basically doubling the speed without overheating the entire package. It gets hot, says The Verge, but not to the point of a Samsung Galaxy Note 7-level disaster.