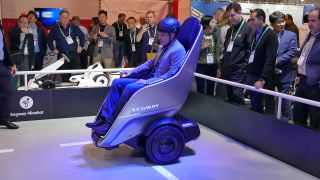 LAS VEGAS — Every year at CES I hope for that one moment when I just can’t help but smile. Like when I wore a VR headset for the first time or seeing the first rollable OLED TV. And I just had that moment by test driving the new Segway S-Pod.

I was pretty skeptical when I heard about the S-Pod, which is a two-wheel, self-balancing vehicle designed for enclosed spaces such as airports, malls, theme parks and corporate campuses — at least for now. But driving this thing around at Segway's booth here at CES 2020 felt thrillingly futuristic and surprisingly intuitive.

Up close with the S-Pod

The S-Pod looks like an oversized rolling gaming chair, complete with multiple LED lights. But it's a transportation vehicle designed to go up to 24 mph. There's two big wheels that do the driving and one small wheel on the very front and back for balancing the S-Pod when reclining for driving and lifting you back up when it's time to exit the vehicle.

When you're sitting down, the S-Pod has a plush feel to the seat, and there's two oversized arm rests. The right side houses the joystick and a button to raise and lower the seat. And the left side has a slot for a tablet and a separate button for honking the S-Pod's horn.

What is the tablet for? You can use it for customizing the colors on the LED lights and setting their brightness. But the best feature is the ability to remote control the S-Pod with the slate. (Segway was using a Surface Pro for the demo.) You’ll see a live video feed on the tablet, and you can move the S-Pod around just as if you were using the joystick, which amazed onlookers.

The S-Pod is a joy to drive (with serious oomph)

After I strapped on my helmet — and signed a waiver — I sat down in the pod and pressed a button to recline into the riding position.

From there I just used the small joystick to start driving around the track. It was a little jerky at first, but once I got the hang of it I zipped along smoothly. The S-Pod has a lot of oomph so I had to be sure to go easy on the joystick. The pod can actually go up to 24 mph but this unit was capped at 7 mph for the demo.

The joystick also makes it a breeze to turn; I did a couple of 360-degree turns on a wider part of the track with very little effort. In a nice touch, the LED lights on the back of the chair automatically blink when you turn, so you don’t have to activate a blinker.

I didn’t have to break when driving the S-Pod, because all you need to do is stop accelerating to stop.

When I was all done, I just pressed a button on the S Pod to have the device automatically lift me to a standing position. It was a bit jarring but I never felt like I was going to tip over or fall out.

I can see how the S-Pod was inspired by the gyrosphere in Jurassic Park. But this is not just a futuristic concept. It’s being deployed this year in corporate environments and Segway is targeting a release for consumers as soon as 2021. Unfortunately, we don't have a price or release date, but this definitely won't be cheap.

I can’t wait to take another ride.

Check out our CES 2020 hub now to see all the latest news, hands-on impressions and videos from the world's biggest tech show.