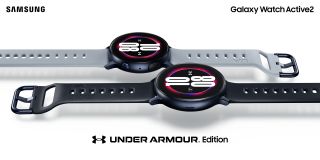 Samsung took the wraps off its Galaxy Watch Active 2 smartwatch days before its Galaxy Unpacked Note 10 launch, but the company had a surprise in store for the main event: an Under Armour special edition of the watch that unlocks exclusive fitness features for runners.

With the $309 Under Armour edition, available in September, the Galaxy Watch Active 2 turns from a smartwatch with fitness features to a full-blown fitness tracker. Here’s how it’s different from the basic model.

The Galaxy Watch Active 2 is coming in an Under Armour edition for $309 and MapMyRun functionality built in. #GalaxyWatchActive2 #SamsungEvent pic.twitter.com/grLVLveS1SAugust 7, 2019

The Under Armour edition, available this fall, pairs to Under Armour’s Hovr lineup of Bluetooth shoes, which sync to MapMyRun (Under Armour’s running app) on smartphones and, now, the Galaxy Watch Active 2. If you pair the watch to a pair of Hovr sneakers, the watch face will display stride length and deliver real-time coaching.

Under Armour’s smart shoes offer more insights than you can get from a wrist-worn wearable, such as details on your running form gleaned from how your foot hits the pavement. I’ve used Under Armour’s connected shoes in the past, and found that the level of detail you get from them is definitely more advanced than a smartwatch can offer.

Aside from tighter integration with MapMyRun and Under Armour’s shoes, the Under Armour edition of Galaxy Watch Active 2 has all the same sensors that the base model does, including built-in GPS and a heart rate sensor for accurate workout-tracking.

MapMyRun will be a single touch away from the home screen on this edition, too, thanks to a specially designed watch face for this special edition. The Under Armour edition of Galaxy Watch Active 2 comes with six free months of MapMyRun’s premium tier, normally $5.99 a month.

Otherwise, the OneUI interface Samsung developed for its Galaxy smartphones and then brought to its Tizen OS watches remains the same.

When it comes to design, Samsung took cues from Under Armour’s running gear. Both 40-millimeter and 44mm sizes of the watch come in Aqua Black aluminum. And both versions sport a fluoroelastomer band, which is more comfortable than silicone for running. The 40mm’s band is Mod Gray, and the 44mm model’s is black.

Just as Apple developed a special edition Apple Watch for Nike devotees, Samsung is betting on an Under Armour partnership to attract buyers who might otherwise go for a more sport-focused watch, such as Garmin’s Forerunner 245. It’s unclear how many watch buyers will also snag a pair of Under Armour’s Hovr shoes, which come in a range of styles for $110-$120 (a competitive price for running trainers).

If you’re not a runner, the Under Armour edition probably won’t appeal to you. But for those of us looking for a smartwatch that can track running metrics in addition to offering the sophisticated smartwatch features we’ve come to expect in 2019, the Galaxy Watch Active 2 Under Armour Edition might be the fitness watch we’ve been waiting for.