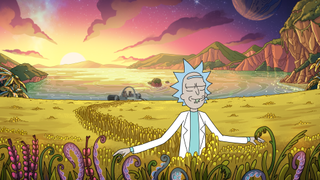 It's been forever since we've gotten a chance to jump into another galaxy with Rick and Morty, but our wait is almost over.

If you've been living under a garage-based lab for years, Adult Swim's Rick and Morty follows a manic and careless scientist named Rick Sanchez, who's spent 3 seasons being a pain in his family's backside. In particular, Rick's tried to liven up things for young Morty, who's way too nervous and risk-averse for his grandfather's shenanigans.

But it's been a while since those three seasons aired, in part due to drawn out contract negotiations between Adult Swim and show co-creators Dan Harmon and Justin Roiland. Fortunately their new deal locks the pair in for a whopping 70 new episodes, which is more than twice the 31 episodes that comprised seasons 1 through 3.

We have a month (November 2019), but not a date. But let's take a moment to think about the wait between today and season 3's October 2017 finale. It's the kind of thing that irks fans and even embarrasses show-runner Dan Harmon, who told Entertainment Weekly "I think it’s safe to say without fear of being wrong that the gap between seasons 3 and 4 will be the longest and last time that it’s ever so long that it’s ridiculous."

And while Harmon admitted that he can't make concrete promises, "I don’t know how fast we can do it," the Community creator used his next breath to say "I know it will never be this long again."

How is Harmon so sure? He confided that "it is structured into our deal that if we’re going strong and fast there are options to deliver more episodes at a time."

Where will Rick and Morty season 4 air?

While those in the U.S. will continue to catch Rick and Morty get into trouble on Cartoon Network's late night Adult Swim block, the series is on other networks for those around the world. Channel 4 will take Rick and Morty off of Netflix's hands for Season 4, though Aussies will keep the show on their Netflix rotation.

The first full trailer for Rick and Morty Season 4 (it's nearly 2 minutes long) is here, and it's good. Not only does an alien named Chachi bite the dust (but what of Joanie?) but we see a ton of familiar characters. I would name them all here, but why spoil the surprise? What I will tell you, though, is that I can't wait to see how the Rick & Morty-verse takes on Akira.

A clip shown at San Diego Comic-Con 2019 teased a new character (who you see in the above trailer), and announced the Nov. 2019 release window.

Rick and Morty season 4 cast: who's joining the show?

At San Diego Comic-Con 2019, we learned that beloved director Taika Waititi (Thor: Ragnarok) is going to join the Rick and Morty voice cast in season 4. In a clip, we heard him voice Glootie, a six-eyed purple alien who sports claws and an interest in creating apps. Glootie's interning for Rick and helping him develop a dating app.

As much as we want Sam Neill (Jurassic Park) to riff on his most iconic role, Dr. Alan Grant, Roiland told Entertainment Weekly that Neill will voice another member of Glootie's alien race.

Other additions to the cast include Paul Giamatti, Kathleen Turner, Matthew Broderick and Liam Cunningham.

How should fans get ready for Rick and Morty season 4?

If you're like me (a lapsed fan) take the advice from co-creator Justin Roiland, who told EW "I would definitely say watch all of season 3 before season 4."

What do we know about Rick and Morty season 4's plot? (SPOILERS)

Okay, again, consider yourself warned about plot spoilers. These reports may be from Hiptoro, a site whose record isn't exactly proven, but it all sounds plausible.

Early speculation, which is tied to the above photo of a blissed out Rick, suggests that  Beth, Jerry, Morty and Summer will eject the chaotic device-maker from their lives for the majority of the season. The separation, though, is supposed to cause a new rift between Rick and his daughter Beth. The latter may even die this season, only to be brought back to life.

A report of episode 1's plot has leaked, with the detail that the show is going a bit bizarro-world, with an upbeat edition that's "uncharacteristically light and happy." That tone may be tied to Rick having a condition that sounds a lot like amnesia.

I'd also expect another edition of Interdimensional Cable, the running series in the show where the family uses a remote to channel surf all the weird programming from across the different dimensions. We expect this because of an Instagram post from Roiland that captioned a studio voice recording session with "Idc3 (maybe)"