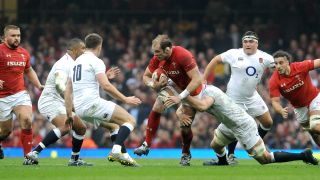 In mere moments, England begins its quest for redemption following a walloping 21-13 loss to Wales at this year’s Six Nations tournament. And while they've got the home advantage at London’s Twickenham Stadium, these are two very evenly-matched squads.

You won’t want to miss a minute of the action. Here’s how to live stream the England vs Wales Rugby U match.

The fierce rivals have faced off 132 times since 1881, with England boasting a slightly better record. Though the stakes this time are high—It’s both squads’ first warm-up fixture to the Rugby World Cup, which starts on Friday, September 20 in Japan.

When is the England vs Wales Rugby U match?

How can I live stream England vs Wales in the U.K.?

The match is airing live on Sky TV’s Sky Sports Action channel. But if you don’t have Sky TV, you can buy Now TV’s Sky Sports Pass. If you only need access for the day of the match, you can sign up for a Now TV Sky Sports Day Pass for just £8.99.

For £5.99 a month, you can also purchase a Now TV Mobile Pass, which lets you live stream five Sky Sports channels, including Sky Sports Action, right from your phone.

How can I live stream England vs Wales in the U.S.?

Fans in the U.S. can watch the match using RugbyPassTV. For $1/month, RubgyPassTV gives you 24/7 access to all the Rugby content you could possibly want, including today's game.

RubgyPassTV offers built-in support for AppleTV and Chromecast, and is also available in an app-version for iOS and Android.

You don't need to miss a single moment just because you're away from home. You can watch the match from wherever you vacation, getting the streaming service of your choice, in defiance of any geo restrictions that may try and block your way.

Once you have a VPN, and we've got our picks on the best VPNs out there, you can make it seem as if your computer is back home, or anywhere else in the world. This way you can use the legal service that you're used to, and stop cycling through illegal streams from wherever you're pulling them from.

Our favorite VPN service, ExpressVPN costs as little as $6.77 per month if you sign up for a one-year contract, and there's a 30-day money-back guarantee. If you just need ExpressVPN for the match, the shortest subscription available is $12.95 for a month of access.View Deal

Cheap and secure, NordVPN is just $2.99/month for a three-year contract, while a month of service costs $11.95. NordVPN uses 2048-bit encryption, and makes it easy to use streaming services.View Deal

Performance is just average, but TunnelBear is one of the simpler VPNs out there. At $9.99 for one month of service, it's also a solid lower-cost option if you just want to use the VPN during the match.View Deal