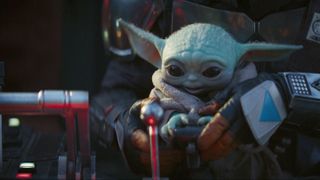 Baby Yoda toys at Build-A-Bear, you can soon buy. Build-A-Bear announced it will sell stuffed animal versions of Baby Yoda, the adorable character on Disney Plus' The Mandalorian, in its stores in the next few months.

Build-A-Bear CEO Sharon Price John announced the news at the ICR Conference in Orlando, Florida and showed off the Baby Yoda toy to the audience.

“I’m excited to share we will be one of the first companies to provide the digital and internet phenomenon who is trending higher than all the presidential candidates combined. We now will have The Child, also known as Baby Yoda,” John said, Business Insider reports.

"We started this process almost with the first episode," she noted. It's not clear as to whether you'll get any customization options for building your own Baby Yoda — though that little tea cup really should be a free upgrade.

Build a Bear Baby Yoda will be coming in the next few monthsVia business insider #TheMandalorian pic.twitter.com/gJHnVmOCR7January 14, 2020

Demand for Baby Yoda toys has been through the roof since the impossibly cute character made his debut on The Mandalorian on Disney Plus in November. Disney did not make any merchandise available at first, ostensibly to avoid spoiling Baby Yoda’s existence (or they simply whiffed).

Instead, fans have had to make do with simple official Disney totes and T-shirts or homemade Etsy items. They can also pre-order a Baby Yoda plush doll made by Mattel, Hasbro’s talking Baby Yoda doll and Funko POP! figurines.

Most of these Baby Yoda toys will not be available until spring 2020, which is also the same window for the debut of Build-A-Bear’s stuffed animal.

In the past, Build-A-Bear has targeted children, but now almost half of its sales are items geared for teens and adults. The business has experienced significant growth thanks to partnerships with brands like Disney, Dreamworks and Pokemon.

"It's great, again, to be in business with best-in-class partners," John said, adding that Build-A-Bear worked quickly with Disney and Lucasfilm to make the Baby Yoda toy available. This is the (new) way.