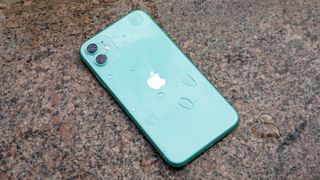 Whether you're bracing the snow or hitting the beach, you'll want to have one of the best smartphones at the ready to capture memories of all your outdoor shenanigans. But fun times can quickly turn into tragedy if your phone gets destroyed at the sight of liquid.

Thankfully, today there's a variety of water-resistant handsets with great cameras and solid features out there, so you can have a superb device that will survive being submerged. The iPhone 11 Pro and iPhone 11 Pro Max are our top choices for durable yet premium phones that outperform everything else on the market. But there are plenty of alternative options from the likes of Samsung, Google, LG and others if Android is more your flavor.

Here are our picks for the best water-resistant phones that can stand up to your wildest adventures.

The iPhone 11 Pro and iPhone 11 Pro Max are rated IP68, which is pretty much standard for flagship smartphones. But Apple improved both flagships' durability by making them able to withstand 4 meters (13 feet) of water for 30 minutes, double the depth of the iPhone XS and XS Max. That means if your pricey new iPhone takes an unexpected dive, you should be able to rescue it with time to spare. The iPhone 11's IP68 rating has also been beefed up with 2-meter water resistance, so you don't need to spend $1,000 to get a durable premium phone.

With the iPhone 11 Pro and 11 Pro Max, you'll also get a stunning OLED display, triple-lens camera with impressive Night Mode, Apple's industry-leading A13 Bionic processor and solid battery life in addition to the durability improvements. For buyers looking to upgrade from older iPhones, Cupertino's new high-end flagships are worth the splurge.

Nationwide & International Text to over 200 countries in the world
$20
upfront
$96.66
/mth
View Deal
at
Verizon Wireless
See all prices (158 found)

The $699 iPhone 11 is rated IP68, just like its predecessor, the iPhone XR. But Apple improved the iPhone 11's durability by making it able to withstand 2 meters of water for 30 minutes, compared to the iPhone XR's 1-meter rating. It's unlikely you'd actually leave your iPhone in more than 6 feet of water for a full half hour, but, hey — anything can happen.

The iPhone 11 Pro and 11 Pro Max are rated for up to 4 meters (13 feet) of water, but otherwise, the iPhone 11 delivers the same overall performance for hundreds of dollars less thanks to the A13 Bionic processor. The iPhone 11 also offers many of the same excellent photography features that its more expensive siblings do, despite having one fewer camera lens.

Nationwide & International Text to over 200 countries in the world
$30
upfront
$84.16
/mth
View Deal
at
Verizon Wireless
See all prices (163 found)

The Pixel 4 and Pixel 4 XL don't improve upon the IP68 water resistance of their predecessors in a significant way, though you can at least rest assured Google's newest flagships will withstand a dunk in as much as 5 feet of water. Rather, the real strides this time around concern the new Pixels' displays, authentication systems and, of course, their cameras.

Both the 5.7-inch Pixel 4 and 6.3-inch Pixel 4 XL tout Google's first 90-Hz OLED screens and dual-lens rear camera systems. The extra shooter on the back of each model is a 16-MP telephoto, which, coupled with Google's Super Res Zoom technology, can deliver up to 8x digital power that is almost as lossless as optical zoom. Both Pixels also include three-dimensional Face Unlock, similar to Apple's Face ID system, and support Motion Sense air gestures using Google's breakthrough Soli radar chip.

Unfortunately, neither phone lasted particularly long in our battery test (especially the smaller Pixel 4, which has a downsized battery compared to last year's Pixel 3). Still, Google's range-topping handsets have so much going for them, they're certainly worth a look for Android users.

That makes the S10 line an excellent choice for users who are still lamenting the omission of 3.5-millimeter ports from most high-end handsets, but don't want to skimp on durability or performance. Buyers get a powerful Snapdragon 855 chipset with every model, at least 128GB of storage and 6GB of RAM, and cutting-edge features like an in-display ultrasonic fingerprint sensor and triple-lens rear cameras on the S10 and S10 Plus.

Samsung Galaxy Note 10 and Note 10 Plus

Whether you spring for the 6.3-inch Galaxy Note 10 or the 6.8-inch Galaxy Note 10 Plus, you're getting a phablet equipped to withstand submersion in up to 5 feet of water for a maximum of 30 minutes. That's especially impressive when you consider the massive aperture left by the S Pen. Phablets are a rare breed these days, so the fact Samsung went to the extra trouble to make the Note 10 series as sturdy as its less pricey S10 brethren without sacrificing the stylus deserves some praise.

Under the hood, the Note 10 bears quite a few similarities to the S10 family, with its Qualcomm Snapdragon 855 processor, minimum of 6GB of RAM and Samsung's OneUI front end running over top of Android 9 Pie. There's a hole-punch camera embedded within the top edge of the display, as well as either three or four lenses on the back (depending on the model), which comprise standard wide, ultrawide and telephoto optics.

Neither Note 10 is the finest mobile camera we've tested this year, but they're still among the best out there. Couple that with the Note 10's special features that really appeal to power users, like DeX desktop support, swift handwriting-to-text exporting and the ability to use the stylus as a remote shutter, and Samsung's phablets are as capable as they are durable.

The least expensive of Apple's full-screen, Face ID-equipped iPhones might cut out some luxuries, like dual rear cameras and an OLED display. However, the 6.1-inch, $599 iPhone XR is still certified IP68 water resistant — just to a slightly lesser extent than the newer iPhone 11 and iPhone 11 Pro. Those handsets, which cost $100 and $400 more, can with stand submersion up to 2 meters (6.5 feet) and 4 meters (13 feet) deep, respectively, for a maximum of 30 minutes. Conversely, the iPhone XR is limited to 1 meter (or 3 feet) over the same length of time.

Thankfully, even despite that slight hit in durability, the iPhone XR packs the same screaming fast and ultra-efficient A12 Bionic processor as the iPhone XS series had. It also boasts the best battery life of Apple's 2018 iPhones, per our testing, which will certainly endear it to power users who are keen on maximizing work and play between charges.

Nationwide & International Text to over 200 countries in the world
$20
upfront
$79.99
/mth
View Deal
at
Verizon Wireless
See all prices (165 found)

Samsung's Galaxy Note 9 matches the IP68 water resistance of the newer Note 10 and Galaxy S10 models, with the ability to last up to a half hour in 5 feet of water. While it lacks the sleeker edge-to-edge design of its successor, utilizes an older Snapdragon 845 processor and features a conventional capacative fingerprint sensor on the back of its chassis (as opposed to the in-screen ultrasonic scanners found on more recent Samsung devices), it does have one thing newer Notes lack: a headphone jack. And we're willing to be that makes it more attractive to a great many users.

Fortunately, now that the Note 9 has been replaced, you can get one for a solid discount, allowing you to pick up Samsung's 2018 phablet for well under $800 from many retailers.

iPhone 8 and iPhone 8 Plus

The iPhone 8 and iPhone 8 Plus are quite old at this point, having been released to the world in 2017. They also may soon be replaced in Apple's lineup by a device either named the iPhone 9 or iPhone SE 2, rumored to recycle the 4.7-inch iPhone 8 design with newer, significantly more powerful internals. But until that happens, the iPhone 8 duo represents the only classic-style iPhones with a physical home button that happen to be water resistant.

The iPhone 8 and 8 Plus are not quite as durable as newer iPhones, as they're only rated to last at a maximum depth of 3.3 feet for 30 minutes, rather than the 5 feet of Samsung's devices, or the whopping 13 feet of the iPhone 11 Pro. However, they're still pretty capable despite their age, thanks to Apple's A11 Bionic chipset. What's more, they're very cheap these days, going for just $449 for the cheapest, 64GB model direct from Apple.