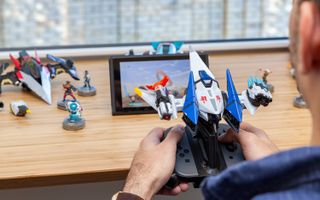 The holidays are right around the corner, and what better gift could you give your child (or yourself) than a game that actually lets you invent what you can imagine?

Starlink: Battle For Atlas (otherwise known as the Star Fox game you've been waiting for) is an action starship game that lets you connect modular toys to a controller mount so that they can appear in-game in real time.

Starlink launches on Oct. 16 physically ($75) and digitally ($60) for the Xbox One, PlayStation 4 and Nintendo Switch. The physical edition is relatively affordable as well, considering it’s only $15 over a full priced game.

The Switch edition nets you the full game plus the exclusive Star Fox bonus mission, the Arwing starship, the Fox McCloud pilot, the Mason Rana pilot, the flamethrower, the frost barrage, the shredder (digital), the Zenith starship (digital), the controller mount and a Starlink poster.

Now, why could this be the best kids game to launch all year? Let's dive right in.

The biggest selling point for kids is, of course, Starlink’s toys-to-life gameplay mechanic.

You start by plugging in a pilot, then the hull of a ship, up to three wings on each side and finally, two weapons. Each pilot has their own personality with unique dialogue in-game that kids can connect with (obviously the only pilot they should be connecting to is Fox McCloud, am I right?). On top of that, each hull, wing and weapon have their own properties reflected through different stats. This creation process grants freedom of individuality, so a child’s creation is a byproduct of their personality.

Of course, the game won't let you get away with everything. It didn't really like it when I stuck four wings on each side of a starship. I was so heavy, I couldn't move an inch.

The toys itself and their ports are pretty durable as well. They endured as I traveled with them in a tight bag getting shoved around on the subway and multiple drops onto the floor. The best part is that if the parts do break, you can still access them through the digital edition. However, the parts will only be accessible for a week, so you'll eventually have to purchase the DLC for that certain part.

Starlink’s story is simple to follow, and while it’s definitely cheesy, it embodies a cartoon-like charm throughout its dialogue and art-style.

The game starts off with the Starlink crew exploring the Atlas star system on their ship, the Equinox, when suddenly they're attacked and the captain is kidnapped. If you purchase the Switch version, you'll get to see the Star Fox crew introduced during the attack, and they're written well, closely resembling their counterparts in official titles. You even get to hear Peppy nag you to “do a barrel roll,” which got me all nostalgic.

While the art-design is far from Ubisoft’s typical approach on edgy realism, like with Assassin's Creed or Division, it works out in the game’s favor. Starlink’s characters have a cutesy design and the environments look down-right gorgeous. Yes, the Switch version had to cut down on some pixels, but overall everything looks incredibly vivid.

Between the art and the story, the presentation can easily rope a child into a world of wonder. I know it got me when I started playing the Star Fox missions and saw Wolf for the first time.

It’s Time For an Adventure

Something you never have to worry about with Starlink is getting stuck on a specific part of the game, mostly because there’s not much you can do wrong.

The gameplay is simple. The piloting is very fluid, there aren’t any complicated combos and it's incredibly forgiving if you die. You can respawn where you died as long as you have a ship to replace it with, and you can repair all of your ships at an outpost for 500 electrum, which is dirt cheap.

While there is a campaign, the game doesn’t stop you if you don’t do the missions. Atlas is filled with plenty of side-missions and exploration opportunities. You can discover and scan fauna as well as farm materials to sell at the appropriate outposts. If you see any baddies attacking merchants, you can come to their defense and you’ll get rewards. You can even travel to the most dangerous environments that you aren’t geared for whatsoever.

If you have an older kid that wants more of a challenge, or if you just want a turn, Starlink does not hesitate to ramp up the difficulty when asked.

You have the choice of Easy, Medium, Hard or Very Hard, and the way to combat the tougher difficulties can be intricate. As mentioned earlier, each part provides their own stats to your ship, which includes the speed, handling, defense, energy and weight. You can also fluctuate those stats with mods, which can be equipped to the hull of the ship or the weapons themselves.

Speaking of weapons, you can strategically fire specific elements in order to create a devastating combo. For example, I fired a vortex weapon, which created a black hole, but when I shot an ice barrage into it, it turned into an ice vortex and therefore amplified my damage output.

If that wasn’t enough, each pilot has an ability completely unique to them. For example, Fox can hail the Star Fox crew and a random member fill fly in and join the fight temporarily. On top of that, all the pilots have traditional RPG skill-trees that you can assign points to when you level up. Pilots also grow familiarity with the ships or weapons they use, so when that levels up you gain access to more mod slots.

You won’t even have to hear your kids fighting about who gets to play because Starlink has full drop-in/drop-out split-screen co-op for two players. You don’t need another controller mount either, as the second player can play the digital edition. If they do desperately want the mount, however, it’s only $20 sold separately.

However, there are some limitations to co-op aside from having no online capability. For example, you can only go as far as 4 units away from your partner before it gives you a warning to stay close. By 10 units, it'll teleport the second player back to the first. In space, it'll go as far as 2,500. Although, both circumstances provide a decent length, so as long as they don't wander off, it shouldn't be an issue.

Starlink: Battle For Atlas is by no means a perfect game, but for kids, it's an incredibly impressive feat. It provides a simple way to deliver toys into the game space and also spark some creativity into the user.

Not to mention that its co-op capabilities gives room for another family member to join the fun. And if you're going to get the Switch owner in your life any game, it might as well be one with Star Fox in it (well, at least until Super Smash Bros. Ultimate comes around).