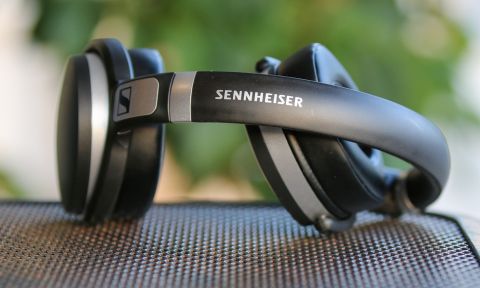 When it comes to audio, the name Sennheiser is synonymous with excellent sound quality as well as pricey extravagance. But that doesn't mean you have to break your budget to get your hands on a pair. You can snang the Sennheiser HD 4.50 BTNC wireless headphones for a reasonable $199 and get a comfy and elegant design, active noise cancellation, NFC for easy pairing and long battery life. The noise cancellation isn't quite Bose-level quality, but overall, the Sennheiser HD 4.50 BTNC is an excellent choice for travelers who are looking to cut the cord without breaking the bank.

The Sennheiser HD 4.50 BTNC has a muted design with a matte-black exterior accented by chrome on the headband and around the ear cups. You'll find the Sennheiser symbol tastefully added in multiple places along the top and sides.

All of the controls are housed in the chrome accent on the bottom of the right ear cup, including a power button, a multifunction track button and a volume button.

Additionally, there is a micro-USB port to charge the headphones and a 2.5-millimeter jack (yes, not a standard 3.5-mm one) that lets you plug in the headphones when the battery is dead or connecting to a nonwireless source — for example, the seat-back entertainment system on an airplane..

The left ear cup contains an NFC chip for quick pairing with compatible devices, as is noted by the icon etched ever so faintly into the plastic exterior.

The ear cups pivot and fold for easy storage in a soft canvas bag for travel. However, other similarly priced or cheaper headphones come with hard-shell protective cases, and I wish that were true for the Sennheiser HD 4.50 as well. The ear pads can be removed and replaced if they ever begin to crack or wear out, though it is a bit difficult to get them back on the headphones.

The 4.50 BTNC headphones feature enough padding to be comfortable without placing too much pressure on my head. I wore them for many hours at a time without any issue. The leatherette is also quite soft, upping the comfort quotient while also making a tight seal to help block out some ambient noise.

The ear cups are large enough to fit almost entirely over my ears (which are small to medium-sized). However, if you have larger ears, they may rest more on top of your ears than over them.

The 4.50 BTNC features enough padding to be comfortable without placing too much pressure on my head.

The first time I turned on the 4.50 BTNC headphones, they automatically launched into pairing mode and took only a moment to connect to my Samsung Galaxy S7. Once the initial connection was successful, subsequent connections were just as fast and effortless.

The 4.50 BTNC features an NFC chip on the left ear cup, making it simple to pair the headphones with an Android phone or mobile device. But if you don't have an NFC-compatible device, simply hold the power button in the On position for a few seconds, and the headphones will enter pairing mode. In all the time I used this pair of headphones, the connection stuttered only a few times.

The controls on the bottom of the right ear cup performed well and are responsive. Quickly depressing the multifunction button allows you to play or pause music, while guiding the spring-loaded button forward or backward advances or rewinds the track selection. I found that this design is much easier to use than competing headphones that make users quickly click a volume button two or three times to accomplish that same function. The same button can be used to answer and end calls.

I initially confused the power/Bluetooth button for the active-noise-cancelling toggle until I looked at the instructions. However, after further research, I discovered that the noise-cancellation function could be enabled or disabled by holding both the volume + and volume – buttons at the same time. But due to the button positioning, this maneuver was slightly awkward to pull off.

Though I typically prefer a slightly exaggerated bass profile, I found that the balanced sonic profile from the 4.50 BTNC offered a full and rounded sound without sounding overprocessed. Bass was generally clean and tight, while mids and highs were generally neutral.

Pearl Jam's "Nothingman" brought me back to high school, with Eddie Vedder's vocals front and center, while the cymbals and high hats in the background remained crisp against the aggressive electric-guitar riff in the foreground.

Comparing these to the Audio-Technica headphones, the Sennheiser 4.50 BTNC offered just a bit more presence in Vedder's vocals as well as fullness in the instrumentation. For another comparison, I listened to the same song on the V-Moda Crossfade M-100, a nonwireless, non-noise-cancelling model, and I found the V-Moda to be significantly more bassy. The Sennheiser 4.50 BTNC is tuned to sound more natural.

With the Sennheiser headphones, the subtle background chorus harmonies on "Finally Moving" by Pretty Lights were easy to pick out.

The headphones deftly combined multiple elements, beginning with a familiar guitar riff borrowed from Sonny Stitt's "Private Number" with a vocal sample from Etta James' "Something's Got a Hold On Me." Elements of the song panned back and forth between right and left, without muddying between channels, while the guitar and simultaneous bass melody continuously looped through the song.

Though I typically prefer a slightly exaggerated bass profile, the balanced sonic profile from the 4.50 BTNC offered a full and rounded sound.

Again, compared with the Audio-Technica headphones, the Sennheiser 4.50 BTNC offers a slightly higher level of detail in subtleties and background music while the vocals were more prominent. Additionally, the Sennheiser headphones are slightly louder while playing at the same volume.

The opening to Jasmine Thompson's "I See Fire" presented a "breathy" vocal with reverb and remained graceful and light, clearing conveying the openness the artist intended before an acoustic guitar began to play. The 4.50 BTNC easily reproduced each guitar strum and pluck, letting me hear the string ring out, while I could occasionally hear the guitarist's fingers move up and down the neck.

For the most part, toggling the active noise cancellation (ANC) on and off on the 4.50 BTNC made very little difference when listening to music, especially on louder tracks. However, on softer, quieter tracks, there was a faint hiss in the background, which disappeared once ANC was enabled.

The Sennheiser HD 4.50 BTNC headphones removed roughly 60 to 70 percent of the rumble from the airplane, but they were lacking compared to Audio-Technica's cheaper headphones.

When I pitted the 4.50 BTNC's ANC against that of the highly rated and cheaper Audio-Technica ATH-ANC9 ($119) on a 2.5-hour flight, I was a bit disappointed.

Sennheiser claims that the 4.50 BTNC lasts up to 25 hours on a charge. However, that estimate refers to when the active-noise-cancellation circuit is turned off. With the ANC enabled, that time is closer to 19 hours. That meant that I had to charge the cans only three times in three weeks. They easily lasted for two 2.5-hour flights, plus multiple 3-to-4-hour listening sessions, without needing a charge.

It took roughly 2 hours to get a full charge. The good thing is that, thanks to the micro-USB port, the Sennheiser 4.50 BTNC can be charged with a portable battery from any number of manufacturers. Comparatively, the Audio-Technica headphones use a less-convenient, single AA battery to power the noise-cancellation circuit and are said to last a maximum of 35 hours on a charge.

In all the time I was using this pair of Sennheiser headphones, the connection stuttered only a few times. However, they regained their connection relatively quickly, out to roughly 30 feet, even allowing me to walk up a flight of stairs in my apartment building. However, when I reached the edge of the connection range, it actually mattered which way my head was turned; the Sennheiser 4.50 BTNC would lose and regain connection as I moved my head around.

Just about everyone I spoke with over the phone while wearing these Sennheiser headphones praised the sound quality and clarity. But on my end, when a call came  in, the noise-cancelling circuit turned off completely. The microphones overamplified everything around me, which was a bit distracting. I heard everything from a cough, to someone knocking on the door, to cars honking as they passed, all with a strange, echo-like audio quality.

If you are looking for great-sounding wireless headphones, I would easily recommend the Sennheiser HD 4.50 BTNC as your go-to cans. At $199, the headphones deliver clear, rich audio with active-noise-cancelling technology that's strong enough to block out most of the din around you. The design is both stylish and comfortable, complete with easy-to-reach controls.

My only real gripe is that the active noise cancellation could be a little stronger to block out the rumble of airplane engines. . Overall, though, the Sennheiser HD 4.50 BTNC wireless ANC headphones are some of the best-sounding headphones available at this price.