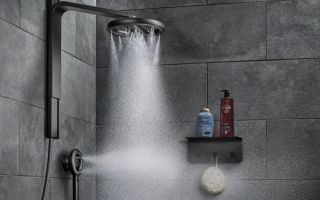 If there's an iPhone of showers, the Nebia Spa Shower 20 must be it. From its patented nozzles that atomize water into a perfect mist to an installation system that uses no screws, this shower head sounds and feels amazing.

At least according to Fast Company’s Mark Wilson, who installed the Nebia Spa Shower at his home: “I close my eyes, and I can picture five arms reaching inside my shower curtain, spritzing my body with hot hairspray. I’m definitely getting wet, but it barely feels like water. When I open my mouth to catch the aerosol, it seems to evaporate as it hits my tongue.”

MORE: The Best Products That Work With Amazon Alexa

It seems that everyone who tries it falls in love with the Nebia, which promises to save you up to 65 percent on water. It’s no coincidence that the company is backed by a who-is-who of Silicon Valley, which include Apple’s CEO Tim Cook and Google’s ex-Chairman Eric Schmidt.

The new Nebia 2.0 — which comes in chrome and jet black — has been re-engineered with a new nozzle design that solves the main problem of the first version: since its nozzles turn water into an aerosol, the tiny drops lose heat very quickly.

The result is that some people felt that the Nebia wasn’t hot enough. The company claims that the new nozzles have been designed using a simulated thermodynamics modeling software, solving the heat issue.

The shower doesn’t require any screws to be installed either, which Nebia claims is an exclusive feature in the industry. Instead, it uses a new 3M adhesive that they say can secure it safely to any wall surface without drilling holes. And the removable head attaches to a metal holder using a powerful neodymium magnet.

The original Nebia sold 16,000 units, raising $3 million in its 2015. The company claims that so far their showers have saved 100 million gallons on water. Seems like a lofty achievement. But helping to save the planet from ourselves comes at a high end-user cost: $500 a pop.

If you are into fancy titilating showers and helping Mother Earth, however, you can support the new model in Kickstarter now.