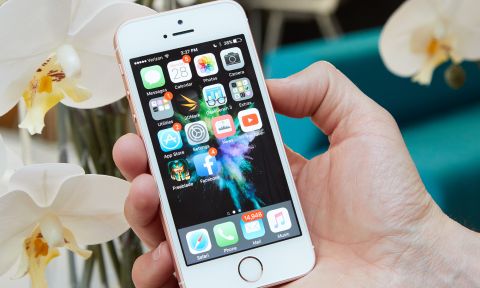 The iPhone SE packs a very fast processor and highly capable camera into a compact frame for an affordable price.

to the US, Canada, Mexico & China
Visit Website
at
Tello
We check over 130 million products every day for the best prices
View All Deals
powered by

I moved on to the big-but-not-too-big iPhone 6, and I'm not looking back. But that doesn't mean the 4-inch iPhone SE isn't a great option. It's for people who prefer a smaller screen — and a price to match. Take my sister-in-law, who has had the pint-size iPhone 5s for a couple of years and isn't keen on the iPhone 6s' $649 price tag. This $399 iPhone SE is ideal for her, because it's compact and powerful, packing the same fast A9 processor and sharp 12-megapixel camera as Apple's latest and greatest devices, but for much less dough.

Although the iPhone SE makes some trade-offs for its relatively low price, based on my testing, it's one of the best smartphone values around.

We’ve updated our review of the iPhone SE based on our in-depth smartphone drop tests. See the results below.

What You Get, What's Missing

The iPhone SE packs a lot of features into its tiny frame, though it doesn't offer everything its larger brothers do. Here’s a quick summary.

On the plus side, the iPhone SE has the same beefy A9 processor as the iPhone 6s and 6s Plus, as well as the same sharp 12-megapixel camera on the back that can capture Live Photos. In addition, the iPhone SE supports Apple Pay, allowing you to make mobile payments at thousands of retailers, as well as within apps, using the phone's Touch ID sensor. The last 4-inch iPhone — the 5s — lacked all of these capabilities.

The SE does leave some features on the cutting-room floor to achieve a lower price. For example, the front camera shoots at just 1.2 megapixels, compared with 5 MP for the newer iPhone 6s and 6s Plus, so your selfies won't be super-sharp. In addition, you don't get the iPhone 6s' or the 6S Plus' 3D Touch display, which delivers shortcuts when you long-press the display and enables more immersive controls in various games.

Originally, the iPhone SE only came in 16GB and 64GB models, and that smaller capacity phone didn't leave a lot of room for photos and apps. A year after the phone's March 2016 debut, Apple addressed that shortcoming by doubling the capacity on the iPhone SE. Currently, you can get a 32GB model for $349 and a 128GB SE for $449. The other compromises — the lack of 3D Touch support and the modest front camera — remain.

The iPhone SE is a dead ringer for the iPhone 5s (and fits in the same cases as that model), but Apple has freshened up the aesthetic with a few touches. For example, the chamfered edges around the handset are now matte instead of polished, so they blend in better with the aluminum sides. The back is available in four colors — silver, space gray, gold and rose gold — and Apple has color-matched the stainless-steel logo for a more unified look.

Compared with the rounded, smooth design of the iPhone 6s and 6s Plus, the iPhone SE looks and feels a little blocky. But this phone is only slightly thicker than the 6s: 0.3 inches versus 0.28 inches, respectively. You'll definitely notice the overall size and weight difference between those two devices, though. The SE is a full ounce lighter and noticeably shorter and narrower.

Beneath the iPhone SE's 4-inch screen is the Home button containing the Touch ID sensor, which lets you unlock the device, purchase apps and use Apple Pay. The sensor is not as fast as what’s in the latest iPhone 6s, but I didn't notice much lag in my use, and I doubt the target audience will care.

The SE survived 4- and 6-foot drops onto wood without any damage whatsoever, and a 4-foot edge drop onto concrete produced a few scratches on the bottom of its case. However, when we dropped it on its face from 4 feet, the screen completely cracked.

A 6-foot edge drop following that caused a chunk of the screen in the lower left corner to come off. As a result, the iPhone SE earned a toughness score of 3.9 out of 10, the lowest in our testing. To see the results of other smartphones, as well as our complete scoring methodology, check out our smartphone drop tests.

At first, going back to a 4-inch screen after using the 4.7-inch iPhone 6 was like looking at a phone through a door peephole. Everything looked smaller and more cramped. On The New York Times mobile website, for example, I could see seven extra lines of text on the iPhone 6. And when watching the Captain America: Civil War trailer, I had a harder time recognizing Don Cheadle's face on the SE, as Iron Man cradled his head after a nasty battle.

I also initially had problems using the iPhone SE's keyboard on this smaller display. Because the layout is relatively cramped, I sometimes typed Back when I meant to hit the M key. But after a day or two I got the hang of it. Plus, I had a much easier time typing on the subway with one hand on the iPhone SE, versus the 6.

The iPhone SE's display offers very realistic hues, notching a Delta-E score of 0.51 (closer to 0 is best). In that Captain America trailer, War Machine's cracked gray suit and the brown dirt around the fallen hero were so lifelike that it made me feel as if I was by his side. The SE's screen reproduces 111.4 percent of the color gamut, which is good, but not as saturated as some other phone displays.

You'll have no problem seeing the iPhone SE's panel outdoors, as it notched a very high 547.2 nits of brightness. That's well above the 428-nit average but behind the Xperia Z5 Compact (618 nits). The Huawei Honor 5x hit a lower 529 nits.

It may be small, but the iPhone SE's A9 processor towers over a lot of other phones when it comes to performance. The CPU made me forget I was using a 4-inch phone while I blasted away robots and other bad guys in the Freeblade game. Even with dozens of enemies on the screen at once, the iPhone SE never stuttered.

The iPhone SE was also quick to launch apps, switch between them and open the camera, taking less than a second with the latter task. Those who have grown frustrated with the iPhone 5s' sluggishness will appreciate this upgrade.

On Geekbench, which measures overall performance, the iPhone SE scored 4,411 on the multi-score performance test. That mark beats not only the category average, but also the Huawei Honor 5x, the Nexus 5X and the OnePlus X and the Xperia Z5 Compact.

With the exception of the Galaxy S7's groundbreaking dual-pixel camera, the iPhone SE's 12-MP iSight camera is one of the best you'll find on any phone at any size. Part of the credit goes to Apple's Focus Pixel technology for fast autofocus, but I mostly appreciated how well the phone could capture scenes in challenging lighting conditions.

For instance, a shot I took during the late afternoon up Fifth Avenue in New York delivered fine detail in the surrounding sun-dappled buildings and a blue sky that didn't get blown out by the clouds. As I zoomed in on the 22nd Street sign, the picture still looked quite clear.

I also had some fun with the Live Photos feature, which captures a second of video and audio before and after each still shot. I accidentally caught an e-cigarette smoker vaping outside the entrance to a subway platform. I loved that I could then share these and other Live Photos on Facebook. (Tumblr is another option).

The back camera can also record 4K video, but Apple continues to weirdly bury this option in the main Settings menu. In other words, you can't change the video resolution in the Camera app. Regardless, a short clip I shot of my golden retriever playing with an orange Frisbee looked quite crisp (I could make out small tufts of fur) and played smoothly on my desktop.

If you're into taking selfies, the 1.2-MP front camera won't wow, but it gets the job done. A selfie I snapped in my office with the SE's camera made my black shirt look fuzzy, and you can't tell that the monitor in the background is a Dell. The 6s Plus' photo is sharper, but not dramatically so. At least the SE leverages the front screen to light up your face in the dark with the True Tone flash feature.

The biggest difference between the iPhone 5s and the iPhone SE is the battery life. When we tested the 5s in 2013, it lasted a measly 5 hours and 46 minutes of surfing the Web over 4G LTE. This time around on the Tom's Guide Battery Test, the iPhone SE lasted a more impressive 8:35 on Verizon. That's nearly 3 hours longer.

The iPhone SE debuted with iOS 9.3, which offers a few nifty enhancements. Night Shift, for instance, automatically tweaks the colors on the display to be warmer after dark. This can be done automatically based on the time of day and your location, although you can schedule this function, too, or manually tweak the temperature to be more or less warm in settings. Night Shift does make reading at night more pleasing to the eye, and it may even help you get shut-eye faster by reducing the amount of blue light that's thought to throw off sleep patterns.

Since the phone's 2016 release, Apple has come out with iOS 10, which brings a number of improvements to its mobile devices, including a smarter Siri, a more robust Messages app and improvements to Photos. The iPhone SE benefits from all these iOS 10 additions, with the exceptions of enhancements to 3D Touch.

Assuming you want a smaller screen, the iPhone SE is ounce-for-ounce one of the best bargains in tech. At $399, this is the most affordable iPhone ever, and yet it doesn't look, feel or perform like a cheap phone. While the look of Apple's 4-inch phone is getting up there in age, the iPhone SE has a premium design, and the combination of the fast A9 processor and robust 12-megapixel camera makes this device stand out among midrange handsets. However, I do wish the front camera were sharper, and that you didn't have to give up 3D Touch capability.

While less expensive than its larger kin, the iPhone SE isn't that cheap, as you can pick up an Android phone such as the Huawei Honor 5x for just $199, complete with a metal body, a fingerprint sensor and a bigger and higher-res 5.5-inch, 1080p display. But the iPhone SE is a lot faster and boasts a superior camera, making this a phone that punches well above its weight class.

to the US, Canada, Mexico & China
Visit Website
at
Tello
We check over 130 million products every day for the best prices
View All Deals
powered by