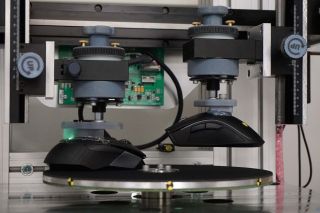 LAUSANNE, Switzerland — All things considered, reviewing a gaming mouse is not that hard. Take a few measurements, play a few games, do a little analytical writing and you're about 90 percent of the way there. Making a gaming mouse, on the other hand, is a monumental task. You need a creative design, rigorous testing and precise measurements, to say nothing of a solid plan to sell the device after it's done. At Logitech's headquarters in Lausanne, Switzerland, the company's engineers pulled back the curtain to let me see how a gaming mouse is made — and, if you're a connoisseur of high-end gaming peripherals, the process is quite fascinating.

Logitech's newest mouse is the G900 Chaos Spectrum. I had a chance to put this $150 device through its paces earlier this month, using the same tools as the engineers who built it. The G900 is quite unlike anything Logitech has built before: an ambidextrous, wireless peripheral that appeals specifically to an e-sports crowd. To convince users to buy this ambitious (and expensive) device, the company would have to tackle a challenge: a long-standing expectation that wireless gaming mice would never be as reliable as their wired counterparts.

If you're curious about how the mouse came to be — or you want a glimpse of how gaming mice develop, in general — here's how engineers conceived, tested and approved Logitech's latest peripheral.

The first thing a mouse needs is a basic concept. After that, it needs a physical design, which is where the mechanical lab comes in. The mechanical lab in Lausanne is fairly modest, as most of the mouse design takes place at a separate Logitech facility in Cork, Ireland. However, I still got to learn quite a bit about how the G900 got its distinctive shape and light weight.

Everything in peripheral-device engineering is a trade-off. The G900 weighs 107 grams (3.8 ounces). Initially, the engineers were aiming for 105.1 grams (3.7 ounces). But a metal scroll wheel feels better than a plastic scroll wheel. Light mouse bodies exploded during early drop tests. Both the right and left mouse buttons needed to withstand at least 20 million clicks at 60 grams of actuation (the amount of force used to depress the buttons) and feel just as good between the beginning and the end of the process. In the end, a sturdier body allowed the mouse to withstand more force and deform considerably before breaking.

The engineers expressed both delight and frustration at the process of creating the G900. While they are quite proud of the device they came up with, they admitted that there is no way to make a "perfect" gaming mouse. The best they can do (and this holds true for just about any piece of professional engineering) is to make the smartest trade-offs they can in order to maximize the device's strengths and minimize its drawbacks.

"If you have an uncomfortable mouse," said Kevin Forde, an electrical engineering director at Logitech, "you're wasting your time."

My first hands-on test came at the radio-frequency (RF) lab. If you're building a wireless device, you need to test it under both ordinary and extraordinary conditions, to make sure that radio interference won't lead the signal astray. To that end, we made use of Logitech's anechoic chamber — a room that completely blocks out external radio frequencies, and costs a mere pittance, at 600,000 Swiss francs (about $617,000 at current exchange rates). (Aural enthusiasts will note that this was not a true anechoic chamber, which blocks out all external sound.)

I had a chance to test the G900 firsthand against three very similar wireless competitors: the Razer Mamba, the Razer Ouroboros and the SteelSeries Sensei. Logitech's RF engineers set up a mouse on a rotating apparatus and matched it with a tracking program. Ideally, the mouse would draw a series of perfect circles. However, they also installed a high-frequency structural simulator (HFSS) in the room to mimic wireless noise from Wi-Fi and Bluetooth signals. Your house may not be as busy as a Logitech office, but chances are, you have a few wireless controllers, Bluetooth speakers or streaming media players that could interfere with a signal.

With no outside noise, all four mice performed equally well, diagramming perfect circles all around. I took hold of the controls and began to gradually increase the Wi-Fi and Bluetooth noise. To be perfectly fair, all four mice performed at or very close to peak efficiency under ordinary household circumstances. The worst-case scenario, however, told a very different story.

Under a huge Wi-Fi and Bluetooth strain (something beyond even a college LAN party), the Ouroboros drew excellent circles but jumped wildly around the screen. The Sensei started to draw spirals rather than circles. The Mamba fared better, jumping only slightly every few rotations. The G900, however, stayed remarkably consistent.

It's important to remember that Logitech devised this test. So while there's nothing untoward about it, it's not surprising that the results favor Logitech's product. However, the test is not designed to prove the G900's superiority, but rather to allay customer fears about wireless unreliability. If a G900 can withstand overwhelming Bluetooth and Wi-Fi noise, it should be fine for both home and tournament use.

One of the most common complaints about wireless gaming mice is that they generate lag and introduce unnecessary delays. But is it true? Logitech set out to test this hypothesis in its optical lab, and I got to experiment for myself. The results were surprising: The G900 was not only theoretically more responsive than similar wireless mice, but it even matched or exceeded some of its wired competitors in my tests.

To that end, I played a simple clicking game with a G900, a Razer DeathAdder Chroma and a SteelSeries Rival. (The latter two are wired mice.) A colored circle would appear on screen, I'd click it and then I'd repeat the process for about a minute. This simple whack-a-mole game was not tracking my score, but rather how quickly the mouse responded to my commands after I started moving it.

The G900 took an average of about 4 milliseconds to respond to my commands, while the Rival was closer to 8 ms and the DeathAdder took about 11 ms. I asked the engineers if there was a functional difference between these numbers; after all, in even the fastest action games, a few milliseconds won't mean the difference between victory and defeat. Furthermore, mouse input is not the only thing that generates latency in a system; there's also the monitor and the motherboard to consider.

The engineers acknowledged that the G900's speed is not an incredible advantage but reiterated that this wireless mouse can process user commands faster than its wired brethren. It may be time, they said, for gamers to cut the cord — especially because many of them swear by wired mice but then go out and buy a wireless Xbox One controller for the very same system.

A gaming mouse is only as good as its sensor, which is what Logitech's engineers test in the tracking lab. Gaming mice are somewhat unusual among peripherals in that they can accelerate from stationary to dozens of miles per hour in an instant. (Motion controls can also do this, but motion controls rarely factor into e-sports.) As such, a good gaming mouse has to continue tracking, even when faced with the prospect of inhumanly rapid acceleration.

In a hands-off test, Logitech engineers put a G900 and a Mamba on a quickly rotating turntable in order to gauge how quickly the two mice could track. (The test was hands-off because there wasn't much to do other than activate the turntable and watch the data appear on screen.) While the G900 wasn't always the fastest in the resultant tests, it was quite consistent and gave off no false readings. The Mamba jumped the gun once or twice.

The most interesting part of the tracking lab was not the test itself, but rather Logitech's thoughts on the quest for gaming mice to achieve ever higher dots-per-inch (DPI) sensitivity rates. "DPI is a consequence of good design, not a goal," said Olivier Theytaz, an electrical engineering director at the company.

Theytaz said most consumers don't have a good understanding of what DPI is or does, and that most pros still play at 400 DPI because it's what the mice they grew up with offered. The engineers are more interested in making a mouse with consistent acceleration than one that accelerates so quickly that most people wouldn't even know what to do with it.

There was even a fun tracking exercise in the RF lab, known as the Katapult 2.0. Logitech's engineers created a compressed-air engine that propels a metal arm holding a mouse across a semicircle at incredibly high velocities. If a mouse can withstand this tracking test — and the G900 can — it's a good bet that it will stand up to whatever punishment gamers can dish out.

Of Mice and Men

While these tests and experiments are by no means everything that goes into a gaming mouse, it was fascinating to get a glimpse behind the scenes and see a few critical steps in making high-end gaming devices. Most of the engineers I spoke with were both lifelong gamers and incredibly knowledgeable electrical engineers, applying the demands of gaming and the laws of physics with equal fervor.

While most of Logitech's tests pitted the G900 against competing mice, the point was not to prove Logitech's superiority, but rather to demonstrate that wireless PC gaming is a viable option. The G900 is as reliable, as accurate and as resilient as a wired mouse, and it's much lighter, to boot, with no cords to get in the way of heated multiplayer matches. Just about every other PC component, from Internet connectivity to printing, has dropped the wire. There's no reason why gamers alone should be rooted to the 20th century.

"Comparing regular mice to gaming mice is like comparing regular cars to Formula 1 racers," said Fabrice Sauterel, the project leader behind the G900. And it's true. Office documents and online videos don't need the same level of precision and reliability. But gaming peripherals can also act as a crucible, by which better technology filters down to the general populace. Today's wireless gaming mice may be tomorrow's everyday desktop and laptop accessories — sleeker, more stylish and ready to meet computing's toughest challenges.