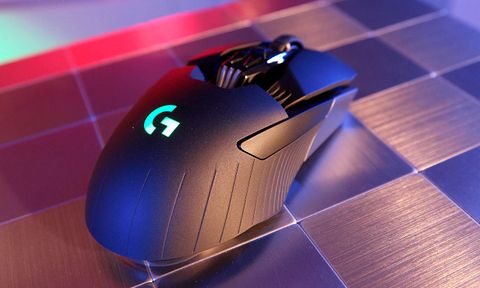 With perfect wireless features, a comfortable design and top-notch performance, the Logitech G900 Chaos Spectrum is a superlative mouse.

Gamers have often been suspicious of wireless mice, fearing the devices would create lag or misinterpret their commands at a critical moment. The Logitech G900 Chaos Spectrum ($150) is a beautiful argument for a wireless take on the best gaming mouse. For competitive gamers who need peak performance without any wires to get in the way, this peripheral has it all: perfect wireless fidelity; a comfortable ambidextrous design; and top-notch in-game performance. It's also a gorgeous piece of engineering.

Unlike previous Logitech mice, such as the G502 Proteus Spectrum and the G303 Daedalus Apex, the G900 is not based on any pre-existing mouse design. As such, it sports a distinctive appearance that complements how supremely comfortable it is, regardless of your dominant hand. The G900 is a small, light, symmetrical device (5.12 x 2.64 x 1.57 inches, 130 x 67 x 40 mm, 3.77 ounces) with a thin body and subtle indentations to rest the thumb and outermost fingers. The only big flourishes are two "fins" at the bottom of the left and right buttons, which look cool but don't have any effect on gameplay or grasp.

Speaking of buttons, the G900 has anywhere between five and nine, depending on how you want to configure it. Because the mouse must cater to both dexterous and sinistral players, it also gives them the ability to swap out thumb buttons. Ambitious gamers can have thumb buttons on both sides, while extremely conservative ones can eschew thumb buttons entirely. This solves a neat and very real problem facing other ambidextrous gaming mice: Even if you disable nondominant thumb buttons, you usually wind up clicking them a lot, which can get annoying.

Aside from the thumb buttons, the G900 possesses a left button, a right button, a scroll wheel that clicks three ways, and two dots-per-inch (DPI) sensitivity buttons in the center that users can also reprogram if they don't need to change DPI on the fly. All of the buttons feel fluid, responsive and well placed.

There's also a button to change the resistance of the scroll wheel (itself a metal contraption with a pleasant rubber coating) and one on the bottom of the mouse to change profiles. This may not sound very useful for the everyday gamer, but for tournament players who plan to take the G900 from place to place and don't want to reinstall the Logitech Gaming Software each time, it can be a lifesaver.

While there are a handful of great e-sports mice out there, few of them are wireless. The G900's ability to perform without a cord is its distinguishing feature, and here, it excels. The G900's wireless features are flawless, even in areas of intense Wi-Fi and Bluetooth traffic. (I had a chance to test this firsthand at Logitech's headquarters in Lausanne, Switzerland.)

The device even gives you three ways to connect: a wired mode (complete with a braided cord that's about 6 feet long) and two options for the wireless dongle. You either attach it to the cord and set it up wherever you'll get the best reception, or jimmy out the dongle and plug it directly into your PC. The former option is ideal for living room setups, while the latter works fine for close-quarters gaming nooks. My only complaint is that you can charge the mouse only by using a cable; Razer mice, on the other hand, offer very attractive charging docks.

Charging the G900 takes about 2 hours and gives you between 24 and 32 hours of battery life. Logitech engineers estimate that the battery can withstand about 800 charges before beginning to degrade, giving the average player at least four years of use. One thing I found interesting is that the Logitech Gaming Software is quite good at estimating how much battery life you have left. This is because it does not use algorithms but rather measures the mouse's voltage directly and translates power consumption to a time estimate right on your screen.

Speaking of the Logitech Gaming Software, it's still one of the best peripheral programs I've used. When you plug in the G900, the LGS will scan for all of the games you have on your system and automatically set up profiles for them. From there, you can program buttons, tinker with the mouse's full RGB lighting (and sync it with Logitech's RGB keyboards and headsets), shift the DPI and even tune it to your mouse pad's surface.

I tested the G900 across a variety of games and genres but gave special consideration to Counter-Strike: Global Offensive and StarCraft II: Legacy of the Void. Because Logitech touts the mouse as the perfect companion for e-sports, I wanted to test the claim for myself.

I came away immensely pleased. Every stroke of the mouse was smooth, accurate and precise, and it was easy as could be to program game-specific commands. Although it lacks the dedicated "sniper" button found on mice like the Proteus Spectrum and the Corsair Vengeance M65, you can still assign the same function to one of the thumb buttons, so first-person shooters are a natural fit. For real-time strategy and multiplayer online battle arena games, you can use the thumb buttons or ditch them. Either way, the mouse is lightweight and fast, making it perfect for scrolling across big maps and selecting units on the fly.

Just to give it a thorough vetting, I also ran the G900 through Quake Live, Baldur's Gate: Enhanced Edition and Marvel Heroes, just to see how it would handle different types of action, role-playing and massively multiplayer online games. Not surprisingly, it handled them all very well, whether I was adventuring through the high-fantasy realm of Faerûn, or slicing and dicing A.I.M. soldiers with an impromptu party of X-Men.

But what surprised me most about the G900 was its versatility. For a mouse that sells itself on e-sports functionality, it works well for just about any genre.

If you crave tournament-grade quality, or simply want a wireless mouse that makes no compromises, the G900 is about as good as gaming mice get. It's comfortable, customizable and versatile, and it knows exactly what it wants to be. Most players simply don't need to dish out $150 for a mouse, particularly when they can get an excellent all-purpose peripheral, like the Proteus Spectrum ($80), for about half the cost. But gamers who are willing to pay a premium price will love what they get in return.