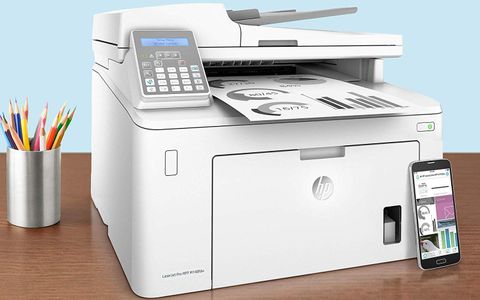 The HP M148fdw offers high image quality and lots of features and speed for the money. But the control-panel operation is a little clumsy, and the wireless setup is a chore.

The HP LaserJet M148fdw ($149) is an all-in-one monochrome laser printer that's well suited for small offices, and its many features make it a bargain for the money. This printer is outfitted with a duplexer for two-sided printing, an automatic document feeder (ADF) for scanning and copying multipage documents and fax functionality. Both the ADF and the duplexer are quick, so multipage documents won't slow you down.

The control panel has a two-line monochrome LCD screen, menu navigation buttons, a 10-key keypad, and dedicated buttons for copying and faxing. The buttons are somewhat small. I found it tedious to navigate the menus and settings on the two-line screen. I didn't find the menu organization very intuitive, and on several occasions, I referred to the printed guide to find settings.

On the two-line LCD, you see only a top menu and one submenu at a time. You use the left and right buttons to go through the submenus, and it requires several button presses to reach some menu items. For example, I had a difficult time remembering that Wi-Fi Direct settings were not under Setup > Network Setup > Wireless but rather in a separate Wi-Fi Direct menu under Network Setup (more on that later).

There is no dedicated Scan to Computer button on the control panel; you need to use the HP Smart software (or other scanning software) to perform that function. Similarly, you use the included software to set up the scan-to-email function.

The body measures 15.9 x 16 x 12.3 inches and weighs almost 21 pounds. With letter-size paper loaded, you can keep the front door that covers the input drawer closed. With legal-size paper loaded, however, you need to keep this drop-down cover open, which adds roughly 5 inches to the depth.

This all-in-one is built for heavy use; it's rated to handle up to 20,000 printed pages per month.

The main input drawer holds up to 250 sheets. Prints arrive in a 150-sheet output tray that's built into the body, under the scanner unit. Also, there's a 10-sheet tray in the back for specialty media. The ADF is built into the hinged lid that sits atop the scanner glass.

The M148fdw printed a gray-scale letter-size photo on plain paper in 18.3 seconds, which was a little slower than the average of 16.6 seconds.

The M148fdw excelled at making single copies; it did so faster than the average of 9.9 seconds and had the fastest time to date.

From my Android phone, a one-page text-only PDF printed in a brisk 6.2 seconds. However, the M148fdw had trouble with our 10.85MB, six-page test PDF of mixed graphics and text; it took the printer 4 minutes and 45 seconds just to print two pages of that document from the phone. An HP representative suggested I print from the HP Smart app rather than from Adobe Acrobat. The first two times I tried this, it still took a few minutes for the prints to show up. On my third try, however, the six-page print job took 40 seconds.

The M148fdw excelled at making single copies. The all-in-one kicked out a black-and-white copy in just 6.2 seconds — much faster than the average of 9.9 seconds, and the fastest time to date. The Brother MFC-L2750DW was slower, clocking in at 8.4 seconds.

The document feeder works quickly while making multipage copies. The HP made a single-sided copy of a five-page text document in a rapid 24.1 seconds, or 12.4 ppm.

Using the duplexer to make two-sided copies did not slow down the copying speed; the two-sided copy arrived in 47.1 seconds, or 12.7 ppm. The Brother MFC-L2750DW, which scans both sides of a sheet simultaneously, was slower at making duplex copies, doing so at 10.5 ppm.

The M148fdw scanned at slower-than-average speeds. It made a black-and-white scan to PDF at 300 dpi in 15.5 seconds, versus the average of 10.9 seconds. The Brother L2750DW performed the scan in 8.4 seconds.

Image quality was high across the board. Printed text looked razor-sharp, as you'd expect from a laser printer. Letterforms looked dark, with crisp edges. Graphics had lots of detail, rich darks and smooth mid-tone transitions.

The M148fdw made high-quality copies of text documents, with letterforms that looked nearly as sharp as the originals. Graphics also were reproduced faithfully, with lots of detail. Dark mid-tones, however, came out slightly darker, and thus did not quite re-create the depth of the original graphic.

Scans looked very attractive. Text looked quite sharp around the edges, and the optical character recognition (OCR) function in the HP Smart software was very accurate. Scans of color photos also looked very true to the originals. However, compared to scans made by the Brother MFC-L2750DW, the HP's scans lacked a little detail in shadow areas, and light grays came out unnaturally bright. Mid-tone transitions, however, were very smooth, and thus the image retained its depth. Skin tone, in particular, looked very natural and true to the original, and details looked very sharp overall.

Getting it to work wirelessly was difficult and, in the end, required reinstallation of the software.

This HP LaserJet is slow to start up, taking 50 seconds to ready itself for a task. For comparison, the Brother MFC-L2750DW XL started up in under 7 seconds.

The LaserJet M148fdw does not come with a CD-ROM. The printed start guide instructs you to download software from 123.hp.com, which was straightforward for setting up a USB connection. The HP Smart software can be used to print, scan and fax. According to online help resources, HP Smart also offers faxing capability, but I did not see the fax function in the software running on Windows 10. To get the fax software function, you need to select the full installation of the software. (The first "recommended" option is a smaller installation that does not include fax capability. This distinction was not spelled out in the printed setup guide. According to HP, faxing will be added to the HP Smart software.)

Getting the M148fdw to work wirelessly was difficult and, in the end, required reinstallation of the software. First, I tried using the software's "change USB connection to wireless" function, but that didn't work. So I tried using the "add a new printer" function in the Windows 10 control panel and was prompted to enter a WPS PIN number. But the start guide made no mention of this, nor did the online manual. I was unclear if this number was associated with the printer, my router or the network password.

Next, I used the printer's control panel and on-screen menus to print a one-page Wi-Fi Direct guide, which said the name and password were on the control panel or home page (EWS). The home page displayed no password. The navigation path was not spelled out.

I tried HP's tech support, but the 2-hour chat did not get Wi-Fi Direct working with either my Windows 10 PC or my Android phone. Tech support gave me the wrong menu path to the Wi-Fi Direct menu, and eventually, the rep just told me the password. Later, I located the password — it took a whopping 11 button presses to get there.

My phone showed the printer, but when I tried to print, I got a message saying the printer was not available.

Thankfully, with the password located, I was able to set up Wi-Fi Direct with my Mac running OS 10.12. on the second attempt. On my first attempt to put the printer on my wireless network, the software crashed. But after I reinstalled the software, the M148fdw successfully joined the network.

In addition to Wi-Fi Direct, the M148fdw supports Apple AirPrint and Google Cloud Print for printing wirelessly from iOS and Android devices, respectively. In addition, the HP ePrint feature allows you to print remotely by sending an email, web page or email attachment to the printer's unique email address (which you can customize).

The HP M148fdw delivers a lot of features and performance for a bargain price. Print speeds are above average, image quality is high across the board, the document feeder and duplexer are fast, and copying is very speedy. Fax capability with a 10-key pad sweetens the deal. The cost per page of 3 cents when using the high-yield cartridge is just above the average of 2.8 cents. However, the control panel operation is a little clumsy, the setup instructions are vague and the process of setting up the wireless connections is a chore.

By contrast, our Editors' Choice, the Brother MFC-L2750DW, offers comparably high print quality, yet prints faster in all of our test categories. The Brother also scans more quickly in both black-and-white and color, and offers slightly better scan quality on color photographs. In addition, the MFC-L2750DW delivers a slightly lower cost per page and a significantly faster startup time.