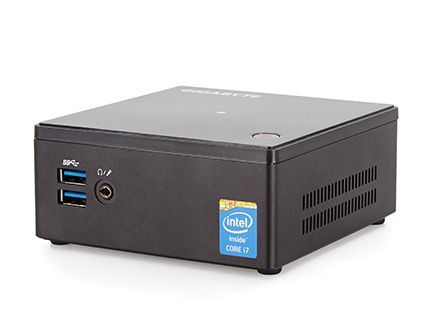 The Gigabyte Brix packs a speedy 5th Generation Core i7 processor and NFC support into a tiny, 1-pound chassis that can fit into the tightest spaces.

If you can fit a powerful Core i7 CPU into a 3-pound laptop, which has a screen, keyboard and battery taking up space, how small of a desktop can you stuff it into? Gigabyte's answer is the Brix GB-BXi7H-5500, a 1-pound mini PC the size of a peanut butter sandwich that features a 2.4-GHz Core i7-5500U CPU, a slew of ports and built-in NFC.

With that size and power, the Brix is ideal for use as a home-theater PC, in space-sensitive business applications (like kiosks and POS), or as an all-purpose computer for anyone who's not a serious gamer. However, like the similarly designed Intel NUC series, Gigabyte's mini PC comes without a storage drive, RAM or software, making it a better fit for tech-savvy users than for mainstream consumers.

Though both companies told us that they designed their systems independently, the Gigabyte Brix GB-BXi7H-5500 looks nearly identical to one of Intel's NUC mini PCs, with the same rectangular shape, round metal-silver power button and dual-USB ports on the front. Even the attractive sci-fi-esque vent pattern on the sides is the same. However, where the NUC has silver-colored sides, the Brix's are black. Where the NUC's lid pops off and can be replaced, the Brix's top stays on but comes with an NFC reader built in.

One of the smallest PCs money can buy, the Brix GB-BXi7H-5500 weighs just 1 pound, with RAM and an mSATA SSD installed while measuring 4.2 x 4.5 inches. It comes in two heights, a 1.3-inch tall version that supports a single, mSATA storage drive and a 1.8-inch tall model that adds in a 2.5-inch SATA drive bay, allowing you to use two drives at once.

We tested the taller form factor, but unfortunately, in the United States, you can only get the shorter one with Core i7 (Core i3/i5 versionswith a 2.5-inch bay are available). By comparison, the Intel NUC is a little wider, at 4.5 x 4.4 x 1.3 inches and 1 pound, while other mini PCs like the HP Stream Mini Desktop 200-010 and Mac mini are significantly larger.

The Brix is so small that you can attach it to the back of your monitor, using the included mounting bracket, which works with any VESA-compatible display (most monitors). The NUC can do this too, but others cannot.

For a small system, the Gigabyte Brix GB-BXi7H-5500 packs in quite a few ports. The front panel has two USB 3.0 connectors and a 3.5mm headphone/mic jack, while the back surface houses a Kensington lock slot, a mini DisplayPort, a full-size HDMI port, a gigabit Ethernet jack, a Kensington lock slot and two more USB 3.0 ports, for a total of four.

With its two video ports, the Brix can connect with up to three independent monitors in total, one with HDMI and / or up to three on the mini DisplayPort if using a DisplayPort hub. Its Intel HD 5500 integrated graphics processor can output at up to 4K on a single screen or 2K on dual displays.

On the inside, the GB-BXi7H-5500 has an Intel Wireless AC 3160 adapter, which allows it to connect to both the latest 802.11ac routers and Bluetooth 4.0 (or lower) devices like wireless mice.

The Brix also comes with an NFC chip in its lid, something other mini PCs don't offer out of the box (future third-party lids may offer NFC on the NUC). With this capability, you can configure your computer to react when other NFC devices or tags are placed directly above it. When I held an Android phone about an inch above the computer, the handset vibrated and asked me if I wanted to beam the website URL I was visiting. When I tapped the screen to beam,the PC gave me a notification asking if I'd like to receive the content. When I confirmed, Windows opened my browser to the correct site.

Though the NFC reader should work with any relevant software, Gigabyte has its own NFC utility, which allows you to pair with up to eight different NFC tags or devices and then launch programs or websites when you tap them on the lid. I wasn't able to get the utility to work with two different phones I tried.

Needed Components and Their Costs

If you plan to install Windows rather than Linux, an OEM copy of Windows 8.1 costs $99.

MORE: Best SSDs for the Money

Accessing the relevant slots on the motherboard is as easy as unscrewing the bottom of the system and pulling it out. Underneath, there are two DIMM slots for RAM, an mSATA port for chip-sized SSDs and a standard SATA 6 Gb/s connector that can attach to a 2.5-inch drive. If you add a 2.5-inch drive, you can mount it on the bracket that's attached to the bottom panel. Adding two sticks of RAM and a single 240GB Intel SSD took us just a few minutes.

After attaching a monitor, keyboard and mouse to the Brix, you'll also need to install your OS. A typical Windows 8.1 setup takes about 20 minutes.

With its Intel 5th Generation Core i7-5500U CPU that runs at 2.4-GHz but can turbo up to 3-GHz, the Gigabyte Brix BXi7H-5500 is more than fast enough for processor-intensive tasks such as crunching large spreadsheets, transcoding video, watching 4K movies or heavy multitasking. Every task I performed on my test system was speedy and smooth, no matter what was running in the background.

While playing a 4K video in another window, I was able to transcode a 2-minute and 30-second full-HD trailer to 720p in just 58 seconds, using Windows Movie Maker. The same task took 11 seconds longer on the Core i5-5200U-powered Intel NUC NUC5i5RYK (Intel will have a Core i7 NUC later this Spring). While this machine was quieter than most desktops and laptops, I did hear some occasional fan noise, which I did not detect when using the NUC.

On Geekbench 3, which measures overall performance, the Brix scored 6,425, higher than the Core i5-5200U-powered Intel NUC NUC5i5RYK, the Core i5-powered Mac mini and the Celeron-powered HP Stream mini 200-010. However, like the similarly small NUC, the Brix uses a 15-watt, dual-core laptop processor rather than a hotter-running, 35-watt desktop component. So the Lenovo ThinkCentre M83 Tiny, which uses a quad-core 2-GHz Intel Core i5-4590T desktop CPU, scored a stronger mark of 8,522. However, the M83 weighs more than twice as much as the Brix, and is nearly two times longer and wider.

The Brix is a master of productivity work, taking just 4 minutes and 31 seconds to complete our spreadsheet macro test, which matches 20,000 names with their addresses using OpenOffice Calc. That time exactly matches the ThinkCentre M83 and beats the NUC by a good 30 seconds and the Mac mini by over a minute.

The Brix's storage speed will vary based on what SSD you put into the machine's mSATA slot. However, the latest generation of Intel NUC mini PCs uses an M.2 interface that supports much-faster PCIe x4 SSDs. Using a 240GB Intel 525 SSD, the Brix took just 33 seconds to complete our File Transfer Test, which involves copying 4.97GB of mixed media files.

The Brix BXi7H-5500's integrated Intel HD 5500 graphics processor makes it capable of playing mid-range games at autodetect settings. The system managed a solid frame-rate of 39 fps when we played World of Warcraft at 1080p resolution with the default settings, 13 fps better than the Core i5 NUC and much stronger than the Mac mini or Lenovo ThinkCentre M83 Tiny. However, the game could not run when we pumped the special effects up to their limits.

On 3DMark Ice Storm Unlimited, a synthetic benchmark that measures graphics prowess, the Brix scored a strong 61,718, more than 50 percent better than NUC and ThinkCentre M83.

The Gigabyte Brix BXi7H-5500 and BXi7-5500 provide plenty of processing power and connectivity in a form factor that's small enough to live anywhere, from your desk to the inside of your entertainment cabinet. Intel's NUC series offers a very similar design, supports faster SSDs (with its M.2 port), seems quieter and has a changeable lid. But it lacks NFC, and its Core i7 model isn't available yet.

If you're a less tech-savvy or more cost-conscious user, neither the Brix nor the NUC is for you, as both require you to buy and install the RAM, SSD and operating system on your own, bringing the total cost up to $750 or more. Business users should strongly consider Lenovo's ThinkCentre M83 Tiny desktop, which has strong support and manageability, along with a desktop processor. Bargain hunters with very basic needs should take a look at HP's Stream Mini Desktop 200-010, which costs just $179 but can't handle gaming or serious productivity tasks. However, if you want a Core i7 performance in a small package, the Brix should be at the top of your list.