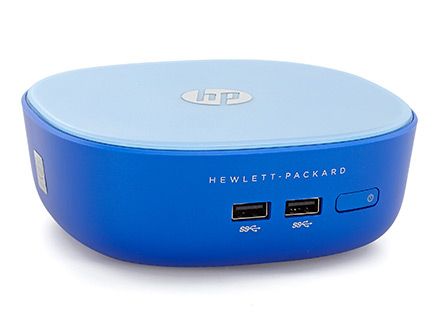 The Stream Mini Desktop stuffs an affordable, attractive PC for streaming media and browsing the Web into a chassis the size of a Tupperware container.

After releasing the HP Stream 11 — a Web-friendly Chromebook competitor that delivered Windows 8.1 for less than $200 — HP is bringing a similar concept to the mini PC. The $179 HP Stream Mini Desktop 200-010 is an ultra-affordable Windows desktop, offering enough performance for Web surfing and media streaming within a cute and compact package that you can take anywhere. The Stream Mini's included mouse, keyboard and 200GB of cloud storage make it an excellent value for a base-level Windows experience, though those looking to do more-intensive tasks should look elsewhere.

If you were to stuff a Tupperware container with the guts of a full PC, you'd get something that looks like the HP Stream Mini Desktop 200-010. This plastic, bowl-shaped mini PC touts a charmingly compact, blue design, topped off by a semi-translucent lid with a shiny HP logo in its center. I found the Stream's colorful construction a refreshing change of pace from the more vanilla-looking mini PCs we've seen, such as the aluminum Apple Mac mini and all-black Lenovo ThinkCentre M83.

The Stream Mini has a healthy selection of ports for plugging in monitors and accessories, starting with the two USB 3.0 ports placed conveniently in the front next to the power button. On the back of this mini machine, you'll find an additional two USB 3.0 connections, an Ethernet port and a headphone/microphone port.

HP's mini PC features both HDMI-out and full-size DisplayPort connections, allowing you to connect to two monitors at once. If you want to dump some photos or videos from your camera, there's a 3-in-1 media-card reader on the PC's right edge. As far as wireless connections go, the Stream supports both Bluetooth 4.0 and 802.11 b/g/n Wi-Fi.

Armed with an Intel Celeron 2957U processor and 2GB RAM, the Stream Mini Desktop 200-010 is built to deliver just enough performance for surfing the Web, watching movies and engaging in light productivity. It serves that purpose admirably. After a full day of using the Stream with my home TV, I found it to be a reliable media center for streaming video, as well as a responsive PC for writing documents and sending emails.

The Stream handled most of the simple tasks I threw at it without hiccups, but I did have minor issues with multitasking. When composing a Google Doc on one half of my screen with a 1080p YouTube video playing in the other half, video playback became a bit choppy, and Docs wasn't responding as quickly as usual.

Despite a few infrequent slowdowns, the Stream proved itself to be a perfectly capable media player. I had no issues streaming music and video from Pandora and Plex, respectively, and when I downloaded a 1080p trailer for Avengers: Age of Ultron, the video played back as smoothly as anything I streamed from the Internet. I'd recommend getting a Windows-compatible remote control (or at least a wireless mouse and keyboard) before using the Stream as your home entertainment box, however.

Our spreadsheet test told a similar story, as the Stream Mini took 9 minutes and 48 seconds to match 20,000 names to their addresses. HP's mini PC was less than half as fast as the ThinkCentre (4:31), and lagged significantly when compared to the NUC (5:02), Mac mini (6:17), and our 6:16 category average.

Just like its Celeron processor, the Stream Mini's integrated Intel HD GPU is built to satisfy the bare minimum. You won't be doing any graphic design on this mini PC, nor will you be playing any high-end games.

HP's mini PC didn't have enough storage to run World of Warcraft, our usual gaming benchmark, so I played the title's less-demanding card-game spinoff Hearthstone instead. The game played smoothly during my session, even as its animated cards leapt onto the board and launched magic attacks at one another. However, the game crashed right after my first match.

The Stream Mini netted a measly 303 on the 3DMark Fire Strike benchmark, delivering less than half the performance of the ThinkCentre (608), the NUC (888) and our 1,073 all-in-one average.

While some mini PCs require you to provide your own peripherals, the HP Stream Mini Desktop 200-010 ships with a keyboard and mouse. The included full-size keyboard packs a fairly standard-issue layout, save for the dedicated buttons for volume control and sleep mode that lie above the arrow keys.

The keyboard's springy, responsive keys allowed me to type at a brisk 91 words per minute with 97 percent accuracy on the Key Hero typing test. With a generous travel of 3.3 millimeters and 70 grams of required force, I felt comfortable with the Stream's keyboard through hours of chopping away.

The PC's included mouse is similarly simplistic, sporting a jet-black design and a curvy, ergonomic shape.

The Stream Mini is pleasingly light on bloatware, with just a few HP and third-party apps to complement standard Windows 8.1 offerings such as Skype and OneDrive.

HP Connected Drive serves as a hub for viewing content on cloud services such as Dropbox and Google Drive, as well as any smartphones or tablets you have synced with the app. Once I downloaded the Connected Drive iPhone app and connected my device, I was able to view all of my phone's photos, videos and songs from the desktop. This was extra handy with the Stream hooked up to my TV.

For security, the Stream packs HP Recovery Manager for refreshing your PC and reinstalling drivers, as well as McAfee Central, which can scan your system and notify you if your PC is at risk. Apps for Amazon and Netflix come preinstalled on the stream, as does MySms, an app for sending text messages from your desktop.

Available for a cool $179, the Stream Mini packs an Intel Celeron 2957U processor with 2GB of RAM, Intel HD Graphics and a 32GB solid state drive, the latter of which is supplemented by 200GB of OneDrive storage for two years.

Like its laptop cousin, the $179 HP Stream Mini Desktop 200-010 succeeds at delivering an essential Windows 8.1 experience within a fun, compact and super-affordable package. The Intel Celeron-powered mini PC has enough power for writing documents and sending emails at your desk, and does a fine job doubling as a streaming media player when hooked up to your TV.

If you're looking to do more than that, however, the Stream isn't for you. Those interested in a desktop-grade mini PC might be better suited shelling out for the Lenovo ThinkCentre M83 or the Mac mini, both of which start at $499. Dell's $179 Core i3-powered Chromebox is a solid alternative for those willing to use Chrome OS, but if you're seeking a Windows machine at a low price, the Stream Mini does exactly what it's meant to.