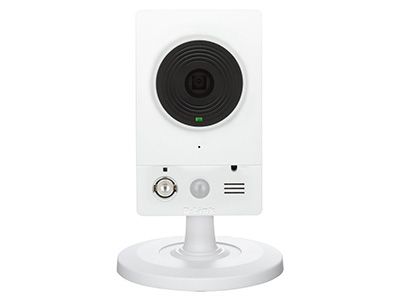 The D-Link Cloud Camera 2200 is an affordable networked security camera, but it offers fewer features than the competition.

The $139 D-Link Cloud Camera 2200 is one of the more affordable networked plug-and-play home-security cameras. Besides HD video recording and night vision, however, it offers fewer features than more expensive cameras. For some, the reduced functionality will be worth the savings, but we think you should spend your money elsewhere.

While not quite as sleek as the Netgear Arlo or the Dropcam Pro, the D-Link Cloud Camera 2200 features a pleasantly compact and inconspicuous design. The rectangular chassis is composed of matte white plastic and is attached to an adjustable stand on the back. The 720p camera is positioned at the top of the front panel, above an infrared LED (used to illuminate the camera's field of view at night), a passive infrared motion sensor and a two-way microphone and speaker.

On the back of the device, there's an RJ-45 Ethernet port, a DC-in port and a digital-in/digital-out (DI/DO) port for connecting to external devices. A reset button and a Wi-Fi Protected Setup (WPS) button, which connects the camera to the router via Wi-Fi, are located at the bottom right corner. On the left side of the camera there's a microSD Card slot for storing recorded video. (You'll have to purchase the microSD Card separately.)

The camera connects to the stand via a mini-ball head mount that rotates 360 degrees horizontally and more than 90 degrees vertically (about 100 degrees up and 10 degrees down). Two screw wells on the bottom of the stand allow you to mount the camera on a wall or upside down.

Measuring 5 x 2.3 x 3.5 inches (HWD), the Cloud Camera 2200 is smaller than the Piper nv, but larger than the Dropcam Pro and the Netgear Arlo. Still, it's small enough that it blends in well with its surroundings. I barely noticed the camera after I placed it on my bookshelf.

Next, open the mydlink Lite mobile app (available for free on Google Play and iTunes), follow the on-screen instructions to create an account, and then tap on the Local tab at the bottom of the screen. The app automatically searches for D-Link cameras on the local Wi-Fi network; tap on the camera when it appears, create a password and then add the camera to your account.

Unfortunately, WPS suffers from a major, and well-known, security flaw -- using brute-force attacks, hackers can crack a WPS PIN in just a few hours, at which point they can surreptitiously connect to your router and view your WPA or WPA2 password. For that reason, we recommend disabling WPS on your router and connecting the Cloud Camera to your network manually.

The manual-connection process is identical to the method described above, except that instead of using WPS, you need to initially connect the camera to your router with the provided Ethernet cable. In the mobile app, check the box for "connect device wirelessly."

Once you've done that, you can unplug the Ethernet cable and position the camera wherever you like. All told, the manual setup took me less than five minutes.

Compared to competing security cameras, the D-Link Cloud Camera 2200 offers very little in the way of customization. The camera will automatically begin recording video and will send you push or email notifications if it detects motion, but it lacks the programmable modes and scheduled recordings offered by the Dropcam Pro and the Piper nv. You can adjust the brightness of the D-Link's infrared LED and the sensitivity of its motion sensor, but that's it.

Another frustration is the fact that the D-Link doesn’t provide cloud storage for recorded video. Instead, footage is stored locally on a microSD Card. While this lets you access recorded video without paying a monthly fee, D-Link doesn't include a microSD Card in the box -- which means you won't be able to record anything until you purchase a card yourself. (Dropcam, by contrast, charges $9.95 per month for access to the last seven days of footage.)

On the positive side, the Cloud Camera sports a microphone that allows you to hear what's going on around the camera. A speaker on the front ostensibly lets you transmit your voice like an intercom, but I wasn't able to get this to function properly until I updated the firmware.

You can remotely control the Cloud Camera 2200 using either the mydlink Lite mobile app or the Web console at mydlink.com. The app is available for free on Google Play or iTunes, and is compatible with Android devices running version 4.0 or above and iOS devices running at least iOS 6.

The app's interface is very simple. The name of the camera is displayed at the top of the screen, above a window with live video from the camera. Buttons at the bottom of the screen let you mute the sound, take a snapshot, change the video resolution, transmit your voice or enable night vision.

A button at the top left corner of the screen opens a separate window with buttons for Playback, Settings and Upgrade Firmware. Tapping on Playback lets you view recorded video, format your SD Card and choose what the camera should do when the card is full. In the Settings menu, you can rename the camera and enable motion detection.

The Web console features a nearly identical interface, with the addition of a button that lets you adjust the brightness of the infrared LED and another that lets you zoom in on the live video feed. You can also select 720p video quality from the Web console, whereas the mobile app only supports up to 480p.

The D-Link's camera records video at a maximum resolution of 720p, with a 66-degree field of view -- the narrowest we've tested so far. This matches the resolution of the Dropcam Pro, the Netgear Arlo, the Belkin NetCam HD+ and the Swann SW-Viewcam, but is lower than that of the Samsung SmartCam HD Pro and the Icontrol Networks Piper nv, both of which record at 1080p.

The Cloud Camera 2200 also includes night vision with a 5-meter (16-foot) illumination distance. Thanks to the camera's infrared LED, I had no problem seeing myself on the live video feed at night, even with all of the lights off in the room.

Unfortunately, the camera's daytime video quality proved as disappointing as its bare-bones feature set. When I watched a live video feed of my living room with the lights on, the video appeared distinctly red-tinged and grainy. Color reproduction improved somewhat when I turned the lights off, though I had an equally difficult time discerning minute details. (Please note: I dropped the camera from a height of 2.5 feet, which caused the left edge of the video to appear black and white in the clip below.)

On the positive side, the mobile app and Web console proved very reliable. I had no problem connecting to the camera even when I was 15 miles away, and although the app and Web console occasionally timed out, I could easily reconnect by tapping on "resume." The camera responded in less than a second when I changed the video quality or enabled night vision.

The D-Link Cloud Camera 2200 is a decent plug-and-play networked home-security camera for the price. For $139, it allows you to keep an eye on your home and provides instant notifications if motion is detected. Moreover, its mobile app is easy to use and reliable, which should please technophobes looking for a simple security solution.

However, I was disappointed by the camera's lengthy setup process and poor video quality. More frustrating is the lack of programmable modes; whereas competing cameras allow you to schedule recordings or set rules for how and when they should alert you, the Cloud Camera only provides a push or email notification if it detects motion.

If you're looking for an affordable networked security camera, the Cloud Camera 2200 is a good choice. If video quality or customization is your biggest concern, however, we would recommend the Dropcam Pro or the Belkin NetCam HD+.