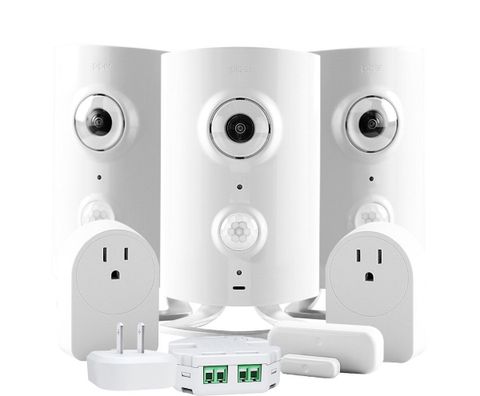 If you're willing to pay a premium, the Piper nv is a security camera and home-automation system rolled into one.

The $279 Icontrol Piper nv is one of the most expensive Web-linked security cameras on the market, but it's also among the few that features an integrated Z-Wave controller -- a chip that lets it remotely control Z-Wave-compatible accessories as diverse as thermostats, door sensors, light bulbs and garage-door openers. Does the Piper's home automation capability justify its steep cost?

The Piper features a curved, glossy plastic exterior that comes in either white or black. The camera is positioned at the top of the front panel, with a motion sensor directly below it. The AC port is located on the back of the device, where there's also an enclosure for three AA batteries that provide backup power.

A microphone at the bottom of the front panel lets you hear what's going on around the camera, and a speaker at the top of the device allows you to transmit your voice like an intercom system. The speaker can also emit a 105-decibel siren if the Piper detects movement or noise.

Three holes on the rear panel allow you to attach the Piper to an aluminum stand or a wall mount, both of which are included in the box. I was disappointed to discover that you can't rotate or tilt the camera when it's clipped onto the stand, though this is alleviated somewhat by the camera's fish-eye lens, which lets you see the room with a 180-degree view.

The wall mount is unobtrusive and can be attached with a small screw (included in the box). Unfortunately, the mount is as inflexible as the aluminum stand.

Measuring 5.5 inches tall by 3.5 inches wide, the Piper is quite large compared with tiny cameras such as the Dropcam Pro (4.5 x 3.2 x 3.2 inches) and the Netgear Arlo Smart Home (2.8 x 2.5 x 1.6 inches). Nevertheless, when I placed the Piper nv on my bookshelf, I barely noticed it was there. My only quibble was with the power cord, which is much shorter than the 10-foot cord that's included with the ArcSoft Simplicam.

Thanks to the included quick-start guide, setting up the Piper nv was a simple affair. I plugged the camera into the outlet and pressed the power button on the back of the device. An LED on the front panel flashed blue, at which point I downloaded the Piper Android app from Google Play. (An iOS app is also available on iTunes.) Finally, I followed the on-screen instructions to connect the Piper to my Wi-Fi network. The entire process took less than a minute from start to finish.

Compared with the Belkin NetCam HD+ and the Swann SW-Viewcam, the Piper nv boasts a huge range of features. It's a home-security system, a video-monitoring system and a home-automation system, all rolled into one device.

The crux of the security system is the Piper's four modes: Stay, Away, Vacation and Notify Only. By default, all of the modes are identical, but each can be programmed to behave differently according to user-defined rules.

Setting up the rules is intuitive. When I set up my Piper nv, for example, I programmed it to automatically begin recording and to notify me if it detected motion or a loud noise when I was away from my apartment (Away Mode), but to only notify me if the temperature fell below 65 degrees Fahrenheit when I was at home (Stay Mode).

The Piper nv also features a built-in alarm that can be paired with the sensor. You can program the device to emit an ear-splitting, 105-decibel alarm if it detects any movement or sound. When I tested the system in my apartment, the siren was loud enough that I worried my neighbors would investigate the noise -- exactly the response you'd want if someone was breaking into your home.

The Piper's sensor is quite sophisticated. Besides motion, sound and temperature, it can detect humidity and ambient light. The device uses this information to construct a chart of your home's "vital statistics," which tracks changes in the living environment.

A major advantage the Piper nv has over competing networked security cameras is the fact that it can remotely control Z-Wave-enabled home accessories. Z-Wave is a wireless mesh-networking technology that allows household appliances with embedded Z-Wave chips to communicate with each other using low-power RF radio. The list of Z-Wave-compatible accessories is enormous, and includes garage door openers, light bulbs, thermostats, locks and sensors.

Z-Wave integration transforms the Piper from a mere security camera into a full home-automation system. Using this technology, the Piper can send you an alert if Z-Wave sensors on your doors or windows are activated. You can also use the camera to remotely control Z-Wave accessories like lights or locks. You can even set schedules for accessories such as thermostats or lighting. Icontrol Networks recently added an optional Z-Wave water sensor that sits in your basement and alerts you if there's any flooding.

Unlike many networked security cameras, the Piper nv can be controlled only via its mobile app; there is no Web-based control panel. You can download the app for free by searching for Piper Mobile in Google Play or iTunes, or by typing getpiper.com/download into your mobile browser and then clicking on either the App Store or Google Play button. Piper Mobile will work with the iPhone 4S (or later models) running iOS 7 or higher, and most Android devices running at least version 2.3.3.

Navigating the Piper mobile app is fairly intuitive. The app is divided into five tabs (Dashboard, Vitals, Live Video, Controls and Rules) arranged in a row at the bottom of the screen. Tapping on each tab opens a new menu.

The dashboard serves as the app's home screen. The upper half of the dashboard shows a circular dial, with each of the four modes (Stay, Away, Vacation and Notify Only) in its own quadrant. Tapping on a quadrant activates that mode and any rules you've programmed. The active mode is red, while inactive modes are gray.

To the right of the dial are buttons for Settings, Events and Recordings. Tapping on each button opens the corresponding menu. In the Settings menu, for example, you can configure your Piper and add or remove Z-Wave accessories. The Events menu displays a list of events such as temperature changes or detected movement and the time at which they occurred. In the Recordings menu you can view any captured recordings. Both Events clips and Recordings can be downloaded to your mobile device.

Tapping on the Live Video tab opens a full-screen video feed from the Piper. There are controls to enable or disable night vision, transmit your voice via the Piper's speaker, enable Z-Wave accessories with on/off functionality and adjust the contrast. At the bottom right, there's also a button to enable quad-view, which breaks the video feed into four quadrants and lets you zoom in on a different part of the fish-eye picture in each quadrant.

Finally, you can manage Z-Wave accessories that are paired with the Piper in the Controls tab, and can program the Piper in the Rules tab to take actions such as notifying you or recording video if it detects motion, loud noises or a change in temperature.

The Piper's 3.4-megapixel camera features a 180-degree field of view -- the widest we've tested so far -- and can theoretically record video at a maximum resolution of 1080p. This matches the resolution of the Samsung SmartCam HD Pro, which shoots with a 128-degree lens, and is higher than the resolution of the Belkin NetCam HD+, the D-Link Guardian, the Netgear Arlo and the Swann SW-Viewcam, all of which record at 720p.

In practice, however, the Piper nv struggled to record video in full HD. The Piper app features a sliding scale for video quality, and by default, it's set to 75 percent to reduce choppiness due to high bandwidth usage. When I cranked the video quality to 1080p on Wi-Fi, the video looked noticeably more detailed, but suffered from severe stuttering and distortion. Streaming the video using mobile data only exacerbated the issue.

On the positive side, the Piper nv adds night vision, a feature that was missing on the original Piper camera. (Hence the "nv.") The night vision does an excellent job of amplifying even the tiniest amount of ambient light, completely illuminating dark rooms. When I turned on the live video feed at night with all of the lights off in my living room, I could easily see myself sitting on the couch.

Overall, the video quality isn't amazing, but it's good enough for home security. You'll be able to see what people are doing, though you might not be able to make out small valuables unless they're placed near the Piper. When I set the camera up on my bookshelf, for example, I could see the furniture in my living room clearly, but I couldn't make out the Roku next to my television.

Unfortunately, the reliability of the Piper mobile app is hit-or-miss. In my experience, the app sometimes had difficulty connecting to the camera, particularly when I re-opened the app shortly after having closed it. The only way I could resolve that issue was by rebooting my Wi-Fi router; closing the app, restarting my phone or unplugging the Piper didn't do the trick.

Still, when everything works (which is most of the time), the Piper is marvelous. I was able to keep an eye on my apartment even when I was at a Starbucks 25 miles away, and could switch among the various security modes and program new rules on the fly. I was a bit disappointed that you can't record video at will, but the camera will automatically start recording if it detects any movement or noise.

The Icontrol Piper nv is a very good choice if you're looking for a security camera that can double as a home-automation system. At $279, it's much more expensive than competing cameras, but the Piper's simple setup process, built-in alarm system and ability to control Z-Wave accessories helps it stand apart from the competition. The addition of night vision is icing on the cake.

Given the Piper's steep price, however, I expected a bit more flexibility in its design, both literally and figuratively. Although the fish-eye lens lets you view 180 degrees, I wish that you could tilt or rotate the camera when it's mounted on its stand. The lack of a Web-based control panel may also prove frustrating if you don't have access to your phone.

Still, the Piper’s combination of security and automation is hard to beat. If you're willing to splurge, the Piper nv should definitely be on your short list.