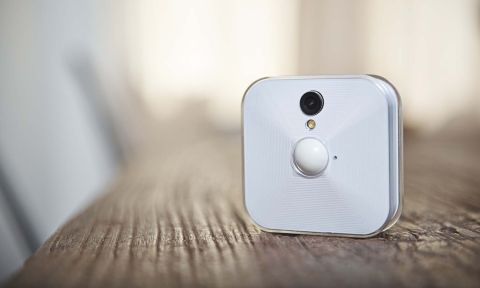 The Blink camera isn't fancy, but it handles the basics well and won't bust your budget.

With every technological advance in gadgetry, the first product out of the sandbox is often the high-end, sleek, feature-laden product for early adopters. But shortly after that, the affordable, entry-level, simple gadget makes its way into the marketplace.

Blink (starting at $99) is in the latter category, offering a limited feature as the trade-off for an inexpensive, easy-to-use, webcam-based home-security camera — and with a no-frills app to match. It's one of the best bare-bones security cameras we've tested — the only real competition is the Belkin NetCam HD+, which has to use wired power — and Blink's free cloud storage is an added bonus.

The design of the Blink camera and its Sync Module (a small hub) is very Apple-esque. With its eggshell-white color scheme (if you can call monochromatic a scheme), rounded corners and minimalist feel, you basically end up with small, square-ish modules that are each 2.8 x 2.8 x 1.2 inches — about the size of a drink coaster, and weighing only 3.3 ounces.

The Sync Module, which communicates with the Blink cameras via both Wi-Fi and a proprietary low-power, wireless protocol, looks like a large key-finder tag. It is 2.3 x 2.5 x 0.70 inches and weighs 1.6 ounces.

Each Blink bundle comes with a Sync Module, and you can connect up to 10 Blink devices (for now, that's only cameras) to a Sync Module.

Each camera ships with two AA non-rechargeable, high-capacity lithium batteries, and the app has a handy built-in battery-level indicator. Blink says the batteries themselves last two years under normal operation, but be sure not to replace them with regular alkaline AA batteries or with lithium-ion AA batteries.

The Blink camera has a built-in microphone and is well-built, but it's recommended for indoor use only. Each unit ships with a mounting bracket and mounting screw.

The Blink camera records in HD 720p at 1280 x 720 resolution. While this is not full 1080p, it is plenty sharp for video being viewed on a smartphone, and is consistent with other cameras in this class. Lower resolution also results in smaller files and less bandwidth usage, which makes for easier, smoother viewing on your phone.

The Blink has built-in white balance and auto exposure, which is common for cameras in this class. It uses passive infrared (PIR) motion detection with adjustable sensitivity and detection up to 20 feet from the camera. Its field of view is 110 degrees, and the lens has a fixed focus, providing a clear view of objects as close as 3 feet (and as far to infinity).

The Blink camera has motion detection and an "illuminator" that really amounts to merely an LED light, similar in strength to the flash unit on high-end smartphones. The illuminator has three power levels, but make no mistake: It will not light up a room.

The Blink camera is a basic, entry-level camera — and it performs that way. I found a significant lag time after hitting various commands or changing settings, as the mobile app "loaded" not just pages, but also commands.

This was despite having four bars of Wi-Fi signal, and the maximum five bars of signal from the Blink sync unit. This was frustrating, particularly after having worked with other cameras in this class.

Blink sends alerts to your smartphone when the camera senses movement. You can control the sensitivity of the motion sensor, as well as a handful of other options — but not a lot of them.  The motion detection will not work through glass, so don't put it next to a window and expect to receive alerts when someone walks across the yard.

The Settings screen does tell you the room temperature as well as battery strength and the strength of both your Wi-Fi signal and the camera-to-sync signal. The app produces full-screen video when the smartphone screen is turned sideways, but other screens on the app will not go horizontal. The video quality is good, but a bit darker than that of other cameras in this class. Color reproduction is serviceable.

You can easily schedule monitoring times, such as when you're away at work, in the smartphone app. Monitoring schedules can be temporarily disabled.

Like many inexpensive home-security cameras, the Blink doesn't record continuous video. Instead, it records short clips that are triggered by motion. (The user will also be notified by the smartphone app when motion is detected.)

The default clip length is 5 seconds, but you can adjust that in the app to be up to 60 seconds long, with an option to cut a clip short if motion stops. (Blink warns that extending the default length of each clip will cut down on battery life.)

There's no local storage available, either in the Blink camera or in the Sync Module, and each clip is uploaded to Blink's servers. Storage is free, but each Blink system gets only 7,200 seconds' worth (20 hours) of footage before old clips are recorded over. Still, that should be enough for many customers' needs. You can download clips to your smartphone through the Blink mobile app.

You can't share the live feed from a Blink system with another user, but you can send recorded clips to anyone via email or instant messenger.

As with just about any kind of gadget these days, your smartphone is the linchpin to the whole "system." In other words, functionality and control often depend on the quality, screen size and storage capacity of your smartphone.

With Blink, it's no different. Before you can even set up the camera, you'll need to become familiar with its app, and only then can you use the app to control the camera. You'll also have to create a Blink account. Fortunately, the Blink Home Monitor app had one of the fastest downloads and setups of any app I can remember.

The app itself is spare but incredibly user-friendly. It gives you specific commands with large arrows, directing you to your next move, whether that's to set up your existing camera or add a new one.

Blink is now compatible with Amazon Alexa, so you can turn the Blink system on and off, and check its status, via voice commands.

In the near future, the Blink Sync Module will be able to act as a hub for more Blink devices. The company said it plans to addan outdoor camera, a water sensor, an entry keypad and door sensors this year.

To use the Blink system, you'll need a mobile device running at least iOS 8.1 or Android 4.4 KitKat, a broadband internet connection with an upload speed of at least 2 Mbps (which rules out many residential DSL customers). The Blink is compatible with WEP, WPA and WPA2 Wi-Fi security.

Installation of the Blink system is straightforward and quick, but it does require an extra step. You're not setting up a camera; you're installing a "system." The product I reviewed was a system that consisted of three Blink cameras and one Blink Sync unit.

As such, you'll need to set up the Sync Module first. This is fairly straightforward, but don't throw out the box, as you'll need the serial number printed on the side to set up your sync module and your cameras.

Once you've set up the Sync Module and connected it to your Wi-Fi network, camera setup can begin. Again, save the box, or better yet, take a photo with your smartphone of the serial number.

Warning: The app does not remember any of the serial numbers. You will need the original number every time you disconnect completely (e.g., when moving, getting a new router, etc.). I found this to be decidedly inconvenient.

Still, keep an eye on the battery-life indicator in the Blink app. You don't want to go on vacation for two weeks to that amazing beach village in southern Thailand and have the camera run out of juice three days in.

Once you install fresh batteries, you'll be ready to set up the camera. The app uses text and picture prompts to help you along, and you'll have to give every camera a unique name. It's very easy. Click this, punch in those numbers, enter the Wi-Fi password, and you'll be monitoring your home in a few minutes.

The Blink Cam is a solid entry-level home-surveillance option, and an even better gift due to its low price tag. It's great for your technologically challenged friends who just want to check on Fido while they're on vacation (in the light of day, of course).

For the same price, the Belkin NetCam HD+ offers night vision, an intercom function and integration with Wemo smart-home devices, but you'd have to plug that device into the wall and pay $10 monthly for cloud storage.

If cost isn't a problem, you could go for the Netgear Arlo Pro, which is indoor/outdoor, is battery-powered, offers seven days' worth of free cloud storage and has an intercom function, but currently sells for $230.

But if none of that interests you, the easy-to-use, no-frills Blink camera system is a safe bet.