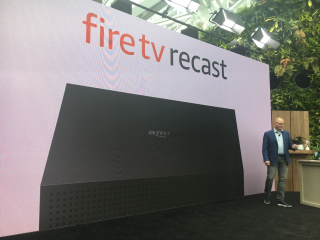 Cord-cutters have yet another way to stream and record over-the-air broadcasts.

The Amazon Fire TV Recast (starting at $229) connects to an HD antenna, and lets you DVR shows that you can pick up over the air. The Fire TV Recast, whose starting model will have two tuners and a 500GB hard drive, will then stream video to any of your connected devices.

As part of the setup process, the Fire TV app will tell you the best place to put the antenna and the device in your house. It will then stream wirelessly to other Fire TV devices, as well as the Echo Show. A higher-end model will come with four tuners and a 1TB hard drive; both models should ship before the holidays.

Amazon is also updating the Fire TV interface to show your DVR recordings, and will include content from other providers who have partnered with Amazon.