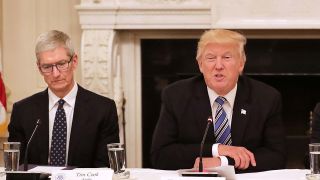 Apple recently moved the production of its soon-to-be-released Mac Pro from the U.S. to China to cut costs, but that decision may cost the company even more.

Apple had requested that Mac Pro parts be exempted from the Trump Administration's tariffs on electronics produced in China, but Trump dashed off a tweet that put a crimp in the company's plans.

Apple will not be given Tariff waiver, or relief, for Mac Pro parts that are made in China. Make them in the USA, no Tariffs!July 26, 2019

Apple had previously been granted exemptions for other products made in China, including AirPods and the Apple Watch.

The previous generation of Mac Pros was designed, engineered and assembled in the U.S. Apple invested in an Austin, Texas facility for the purposes of assembling Mac Pros. But for this year's model, the company moved production to China. Clearly, Trump isn't happy about the move.

Tariffs on Mac Pro parts could increase the price of the already costly machine, which goes on sale this fall for $6,000.

In June, Apple published a letter to U.S. Trade Representative Robert Lighthizer requesting that its products be exempted from the tariffs on electronics produced in China, which have increased to 25%. The company said that the tariffs would "weigh on Apple's global competitiveness."

Lighthizer hasn't yet officially confirmed Trump's tweet, but if Apple CEO Tim Cook pops up at the White House today, we wouldn't be surprised.