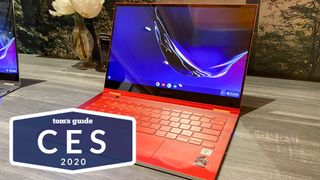 In terms of sheer innovation, CES 2020 has been one for the record books in the laptop space. The big conversation this year has been around foldable PCs — thanks to new notebooks like the Lenovo ThinkPad X1 Fold and Dell’s awesome Ori concept, we’re seeing how laptops can evolve past traditional clamshells and into dynamic folding screens that can be used for serious work and play.

But there are also plenty of reasons to get psyched for traditional laptops in 2020. Lenovo’s Lavie Pro Mobile is one of the lightest notebooks we’ve ever touched, while Samsung’s Galaxy Chromebook pushes premium Chromebooks to a new level with its gorgeous 4K OLED display.

From foldables and ultraportables to beastly productivity machines, here are the best laptops of CES 2020.

There are tons of foldable PCs on display at CES 2020, but the $2,499 Lenovo ThinkPad X1 Fold is the first one you’ll actually be able to buy when it releases in mid-2020. And based on our hands-on impressions, those seeking maximum versatility just might want to. The ThinkPad X1 Fold is comprised of a foldable 13.3-inch OLED screen with a kickstand, which you can fold in half to use it as a mini laptop, stand up on a table to use with a wireless keyboard and close up like a book to stash it in your bag when you’re on the road.

The Fold’s hinge feels impressively sturdy, and the OLED screen promises to be scratch resistant. Lenovo’s foldable PC starts with a yet-to-be named Intel processor and 256GB of storage with 8GB of RAM, and will come in a 5G variant for on-the-go productivity. The X1 Fold is quite expensive and time will tell whether it holds up over weeks of real-world use, but its dynamic, durable design already has us excited for a future of foldable computers. — Mike Andronico

The $999 Samsung Galaxy Chromebook is complete overkill, but we can’t help but love it. This stunning and slim high-end Chromebook sports a 10th Gen Intel Core i5 and a jaw-dropping 4K OLED display -- specs you probably don’t need on a Chrome OS machine, but why the heck not? It’s the thinnest Chromebook yet at just 0.55 inches slim, and its gorgeous cherry red chassis immediately catches the eye.

The Galaxy Chromebook’s 13.3-inch, 3840 x 2160 display had us mesmerized during our hands-on time, and its convertible 2-in-1 design includes a pen for notetaking and sketching. Samsung’s premium Chromebook is super expensive and we’re concerned about its battery life, but this is the kind of machine that could both elevate the entire Chromebook category and make people finally take Samsung laptops seriously. — Mike Andronico

Two is better than one, or at least that's the impression we get from the Dell Duet and Ori: two wicked cool new concept devices that each have two display panels. The Duet wins our interest as a portable dual screen device that we'd bring to CES 2021 since it also has a portable keyboard you can stow away.

The Ori on the other hand is as much tablet as it is laptop, as it's 13.4-inch flexible plastic OLED display doesn't have a traditional keyboard. Similarly to most modern tablets, you can split its screen between two apps when you want to multitask. This foldable PC can be propped up as a standalone screen, or folded in half to function as a miniature laptop. — Henry T. Casey

This just might be the lightest laptop we’ve ever gotten our hands on. The Lenovo Lavie Mobile Pro blew us away with its airy design, which weighs just 1.85 pounds and feels unbelievably feather-light when you actually pick it up.

The Mobile Pro utilizes a magnesium lithium array and “racing car grade” carbon to achieve its impossibly thin design. Its small chassis packs some impressively solid specs, including an 8th Gen Core i7 CPU, a 512GB SSD and a rated battery life of 15 hours. The Lavie Mobile Pro isn’t cheap at $1,599, but it could be the ultimate laptop for folks looking for the lightest possible notebook for staying productive on the go. — Mike Andronico

As Dell faces stiffer competition in the world of 13-inch laptops, it just responded with the new and improved version of the best laptop you can buy: the XPS 13. For starters, its 13.4-inch screen isn't just a hair larger than its 13.3-inch predecessor's; It's also 25% brighter. Part of that increased screen estate comes from Dell continuing the industry-wide trend of shrinking bezels, opening the display up from a 16:9 aspect ratio to a 16:10 ratio.

Speaking of ratios, the XPS 13's slimmer bottom bezel (which means all four sides now meet Dell's InfinityEdge standard) allow this machine to have a 91.5% screen-to-body ratio. Additional positive shrinkage comes in the form of a chassis that's 2% smaller than before. Of course, the XPS 13 comes with 10th Gen Intel Ice Lake Core i3, i5 and i7 CPUs, and all kinds of display options, including a 4K touchscreen panel. — Henry T. Casey

The best business-class laptop just got even better, as HP's Elite Dragonfly G2 makes the blue badass of 2019 faster in more ways than one. Its big headline-making feature is that HP's added optional 5G connectivity, to make this sleek 2-in-1 even more future-proof.

In addition to that, upgraded the 8th Gen Intel CPUs to 10th Gen equivalents, including vPro and all the other standard business security options. Oh, and if you lose this beautiful laptop, you can easily track it down with its optional built in Tile tracker. — Henry T. Casey

As a MacBook owner, I'm constantly turning my nose up at PCs marketed as "made for creators.” But that didn't happen when I saw Acer's ConceptD 7 Ezel. Remarkably nimble with 5 modes, plus a Wacom pen for artists, Acer's workstation is designed for all kinds of work. And that starts with its brawn -- this convertible can be customized for power with support for Intel Xeon CPUs and Nvidia Quadro graphics.

Don't let its name and odd design fool you; this bizarre-looking laptop is actually coming out. In fact, its odd name is kinda easy to explain, once you see its screen in motion. Moving on two hinges, the Ezel’s 15.6-inch panel is reminiscent of an easel, which makes sense given that it's meant for creators. — Henry T. Casey