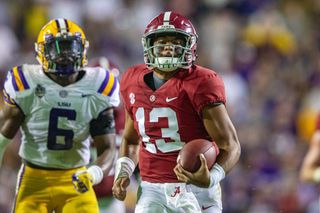 We don't know which teams are going to play for college football's national championship in January. But there's a plenty good chance that whatever happens today (Nov. 9) in Tuscaloosa, Alabama, is going to go a long way to deciding the playoff-bound teams, as the Alabama Crimson Tide host the LSU Tigers.

Anytime these two teams get together, it's worth watching, but you'll want to go out of your way to watch the Alabama vs. LSU live stream this year. LSU enter today's game ranked No. 2 in the country. The Crimson Tide are the third-ranked team. (At least if you go by the College Football Playoff rankings; in the Associated Press poll, LSU and Alabama are the two top-ranked teams.) Both Alabama and LSU are unbeaten this season, and both have designs on the Southeastern Conference title.

Put simply, this is one college football game you don't want to miss. And thanks to a variety of options, it's fairly easy to watch the Alabama vs. LSU live stream. Here's how to follow today's showdown of top-ranked teams.

When can I watch the Alabama vs. LSU live stream?

How can I use a VPN to watch the Alabama vs. LSU live stream?

If you're out of the country when the game gets underway, you don't have to miss out on the Alabama vs. LSU live stream. Try a virtual private network, or VPN, which can make it seem like you're surfing the web from your home country. That way, you can enjoy access to the same streaming services you would receive at home without facing geolocking.

We've reviewed many different services to find the best overall VPN. Our top pick is ExpressVPN, which can access more than 3,000 servers spread out across 160 locations in 94 countries, so you'll always be able to connect somewhere. You can also get ExpressVPN for a low price, especially if you sign up for a year of service.

ExpressVPN: Expect solid performance from ExpressVPN, which also has the benefit of being easy to use. If you do run into trouble, we've found the customer support responsive and helpful.

Where can I find the Alabama vs. LSU live stream?

Because the game airs on CBS, try the the CBS Sports website, where you'll find a section that live streams the network's SEC game of the week. The mobile CBS Sports App (Android, iPhone) also picks up CBS's SEC coverage.

There's one roadblock, though: you'll need to sign in with the login info from your cable or satellite TV provider. So this live-streaming option for Alabama vs. LSU isn't open to cable TV cord cutters.

Can I watch the Alabama vs. LSU live stream without a cable subscription?

You can, though you'll have to subscribe to a streaming service to find the Alabama vs. LSU game. Fortunately, CBS provides a handy option that's relatively inexpensive.

CBS All Access streams all of the network's programming, including its college football coverage. The $5.99-a-month service also includes original programming like Star Trek: Discovery and the upcoming Star Trek: Picard.

But other streaming subscription services provide access to far more programming than just CBS shows, giving you something to watch after the Crimson Tide and Tigers have wrapped things up. You've got a number of choices here, even with PlayStation Vue shutting down its streaming service. Just make sure that the service you pick, includes your local CBS affiliate — not every local channel is included in some packages, so it pays to check with each service.

Here are your streaming service options.

AT&T Now: The service formerly known as DirecTV starts at $50 a month, and this Plus package includes CBS.View Deal

Fubo.TV: A streaming service with a focus on live sports, Fubo.TV starts at $55 a month and includes CBS among its channels. A cloud DVR feature lets you record games like Alabama vs. LSU to watch later.View Deal