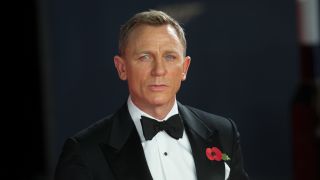 The end of the line has come for Daniel Craig's time as James Bond, and it appears the iconic spy will have a heck of a ride in No Time to Die (aka Bond 25).

If it feels like this movie has been rumored for a while, that's because they've had a hard time getting it made. Danny Boyle (Trainspotting, 28 Days Later) was the original director set to helm the chapter, but he left the role over creative differences. Cary Fukunaga (Beasts of No Nation, True Detective) is replacing him.

One of the most exciting nuggets of news about No Time to Die is that Phoebe Waller-Bridge (Fleabag, Killing Eve) was brought in to punch up (improve) the script.

On Dec. 4, we finally got the first real trailer for Daniel Craig's Bond swan song:

In the clip, we start with Bond and Madeleine Swann (is her name a Proust joke?), mid-car chase, and Léa Seydoux's character (last seen in Spectre) asks Bond "why would I betray you?" His response, "we all have our secrets, we just didn't get to yours yet," seemingly plays out over the trailer.

Then, the scope of the trailer zooms out and M (Ralph Fiennes) is worried, saying "the world is arming faster than we can respond," before he asks "where is 007?"

Moments after we see Bond in Jamaica, where his pal Felix Leiter (Jeffrey Wright) is trying to coax him out of retirement, we meet a new 00 agent, played by Lashana Lynch. She tells James that "the world has moved on commander Bond" and if he doesn't stay in his lane, she will put a bullet in his knee, before pausing "the one that works."

Then, we pivot back to Swann's side of the story, as Blofeld (Cristoph Waltz) tells Bond "you gave up everything for her." Quickly, the trailer shows a series of shots involving facial disfigurements and masks, and as we meet Rami Malek's Safin, we start to wonder if Swann is working for him.

The title was revealed in a short video posted to social media, which shows Craig as Bond, in black and white, walking around white-and-black curves that are revealed to be the title.

When is the release date for Bond 25: No Time to Die?

Daniel Craig has a little time to prepare for his Bond swan song debuting. No Time to Die is coming to U.S. theaters on April 8, and arrives in U.K. cinemas on April 3.

What happens in Bond 25: No Time to Die?

The film is supposed to start with Bond living in Jamaica, having left active service. Of course, the spy game isn't ready for him to leave, as his old buddy Felix Leiter (Jeffrey Wright) needs help.

The two will work to rescue a scientist, whose abduction is tied to an even larger, more nefarious situation.

Of course, Bond 25 will have a villain, and that antagonist will be played by Rami Malek (Mr. Robot, Bohemian Rhapsody).

The full cast is listed below, but the biggest piece of news here is Lashana Lynch (Captain Marvel), who will play Nomi, who will take the 007 codename, being the first black actress to take the moniker. It seems that Bond will surprised to find out his code-number has been taken.

The rest of the cast, detailed below, includes Christoph Waltz returning to play Blofeld and Léa Seydoux as Madeleine Swann.

Stay tuned to Tom's Guide for updates about No Time to Die and all the other movies we're already itching to see.