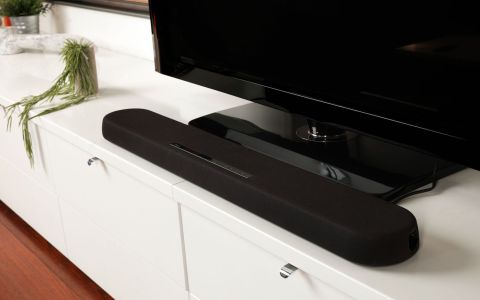 Yamaha has long been a leader in producing soundbars that offer more than you'd expect for the price. The $200 YAS-108, its latest low-price model, continues that tradition, packing in HDMI, 4K passthrough, several sound modes, Bluetooth and more.

But the soundbar landscape has evolved: You'll find some of the best soundbars out there for around $100, and extremely robust models can be had for $400 — which leaves the YAS-108 occupying a middle ground. Should you spend less, more, or is this model just right?

While essentially the same in size as the YAS-107 — Yamaha's previous low-cost model — the 35 x 5.1 x 2.1-inch YAS-108 updates its look a bit, opting for rounded edges. The case is enclosed in black mesh, giving the unit an unobtrusive style. Since it doesn't come with a subwoofer, it really doesn't take up much space or attract attention.

Despite its size, the soundbar has plenty of power to fill a medium-size room, thanks to two 2.1-inch woofers and two 1-inch tweeters. Instead of a separate subwoofer, Yamaha integrated two 3-inch subwoofers into the unit. They produce enough bass to add resonance to dialogue; if you want more boom, there's a wired connection to add a separate subwoofer.

The YAS-108 has one HDMI input and one output, and it can passthrough 4K video. You can also connect by optical digital audio or 3.5-millimeter analog. The soundbar supports two Bluetooth connections at once, which means that, in addition to using your phone as a music source, you could have an Amazon Echo or Google Assistant speaker always paired and listening for commands.

The YAS-108 offers several ways to create a sound that most pleases your ears — something you won't find on many soundbars at this price level.

The YAS-108's remote provides plenty of control: In addition to switching inputs and adjusting volume, you can change the bass level and select among several sound modes, such as Surround, Clear Voice and 3D Surround. Unfortunately, the soundbar's indicator lights are on top of the unit, making it difficult to see what mode you're in while sitting on the couch.

The YAS-108 delivers impressive overall sound for the size and cost. It produces crisp treble and a wide sound field. Even without a subwoofer, it generates enough bass to make voices easy to understand, though it won't rattle the floor.

During the car race scene in Ready Player One, the YAS-108 filled the room with the sounds of tires screeching on the road, King Kong roaring and coins trickling. While watching The Expanse, the dialogue between James Holden and Naomi Nagata was clear, even when Holden was intensely whispering.

During the car race scene in Ready Player One, the YAS-108 filled the room with the sounds of tires screeching on the road, King Kong roaring and coins trickling.

The YAS-108 shines with music as it does with video. On Childish Gambino's 'Summertime Magic,' the unit's wide sound field makes the layers of sound easy to distinguish above the track's thumping bass. The horns on Miles Davis' "Summertime" were crisp and bright, as was Lindsey Buckingham's fingerpicked guitar on Fleetwood Mac's "Never Going Back Again."

Setting up the YAS-108 is simple, as it should be for a soundbar. I connected a Roku to the HDMI in and the soundbar to my TV, and I was watching TV in minutes. I also paired via Bluetooth for listening to music without any problems.

The YAS-108 offers several ways to create a sound that most pleases your ears — something you won't find on many soundbars at this price level. I upped the bass to produce more rumble when watching movies; during music playback I found I wanted less bass in the mix.

The soundbar features several mix-and-match sound modes, such as 3D Surround (one of the few new additions that comes with this model), Surround and Stereo, as well as Clear Voice for boosting vocals and Bass Extension for even more low end. I found I liked Surround mode over 3D Surround when watching movies and TV shows; 3D Surround expanded the sound field but made voices sound thin and processed.

As of now, there's no app that supports the YAS-108. Yamaha said it expects to add support for its HT Controller app around the end of August 2018.

If you own a YAS-107, you probably don't need to upgrade, but the latest model does represent an impressive improvement in sound quality over the YAS-106. With sharp treble and decent bass, for the price, the YAS-108 will satisfy most people's needs and exceed expectations.