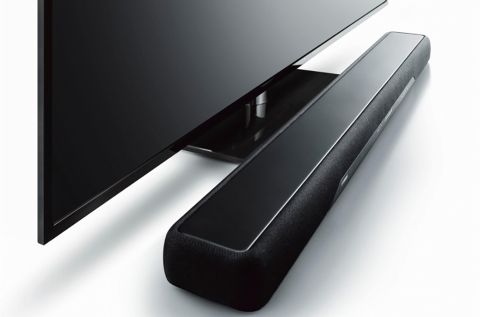 Yamaha's slim YAS-207 soundbar creates an immersive experience for watching movies and TV, though it isn't as good for music.

Midpriced soundbars like Yamaha's $300 YAS-207 are good choices if you want more than a cheap soundbar but you aren't willing to spend $500 or more for a full home-theater audio system replacement. With features like a wireless subwoofer, HDMI input and output, 4K support and Bluetooth, the YAS-207 can handle all kinds of entertainment with impressively clear and rich sound. And with its DTS Virtual:X 3D-surround-sound mode — something you don't usually find at this price — you'll hardly miss having separate surround-sound speakers.

The YAS-207 offers several ways to connect to your TV, including HDMI, digital optical audio and 3.5-mm analog. You can also connect wirelessly via Bluetooth. It has only one HDMI input, though, which means you may need to add an HDMI switcher if you have more than one video source.

The front of the unit features LED indicators to show the active inputs and sound modes. The indicators are labeled, but you need to be close to the unit to see them. I found myself turning to the free mobile app frequently to figure out which modes were active.

For a small soundbar, the YAS-207 produces huge sound, especially in the 3D-surround-sound mode. It produces a wide sound field, which means you can use it even with large TVs, and it gets loud enough to fill a large room with sound.

During the opening sequence of Baby Driver, the sounds of The Jon Spencer Blues Explosion's "Bellbottoms" filled the room, and were punctuated by booming shotgun blasts thanks to the unit's robust bass. Yamaha's Clear Voice mode helped bring dialogue to the fore, making even the accents in The End of the F***ing World and The Crown easy to understand.

However, the unit didn't handle music as well. In stereo mode, Justin Timberlake's "Filthy" lacked brightness, and the distorted guitars in Jack White's "Respect Commander" sounded flat. When I switched to 3D mode for these songs, the treble tones improved, but the overall mix sounded jumbled.

Setting up the YAS-207 was simple: I connected the unit by HDMI to my TV and a Roku Ultra to the soundbar, and it worked. The soundbar came paired with the wireless subwoofer.

The YAS-207 offers several sound modes, including 3D Surround, Movie, Music and Stereo. You can also engage Clear Voice to boost dialogue and enable Bass Extension to accentuate the low end. I found that the best sound for movies and TV came when I used a combination of 3D Surround, Clear Voice and Bass Extension.

Yamaha offers a free HT Controller app for iOS and Android that makes it easier to pick modes. Through the app or the remote, you can adjust the subwoofer volume but not the levels of the drivers on the soundbar.

The $300 YAS-207 will greatly improve your TV and movie experience, thanks to its wide and immersive sound. The soundbar's 3D-surround-sound mode comes as close to Dolby Atmos (which adds height to the sound mix) as you'll get for under $500. While having only one HDMI input may be limiting, the rest of the specs are on a par with those of more expensive units. The main drawback is the way it handles music — if you want a system that plays tunes as well as it does movies and TV shows, you may need to increase your budget and look at a model like the $500 JBL Cinema SB 450.