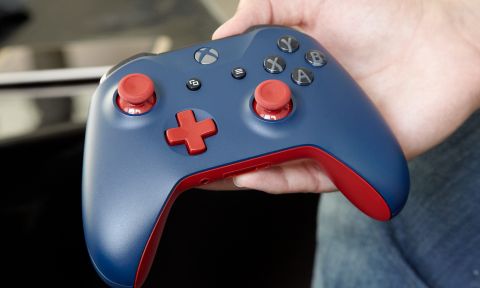 The Xbox Design Lab lets you build a great-looking Xbox One controller for a good price, though there are crazier customization shops out there.

Whether you love or hate the Xbox One, you have to give Microsoft some credit for giving gamers lots of choices when it comes to controllers. Last year, the company introduced its ultrapremium Elite Wireless Controller, and now, you can customize your own version of the revamped, standard wireless gamepad, which is being rolled out alongside the slimmed-down Xbox One S.

But should you shell out $79 for one? Our customized pad certainly looks as good as we hoped it would back when we ordered it, and it even has a few technical benefits over the older Xbox One controller. While other, more expensive customization shops let you get much more creative, the Xbox Design Lab offers plenty of tools for creating a great-looking Xbox One controller at a decent price.

The process of customizing your controller on the Xbox Design Lab website is painless, and actually quite fun. You can change the color of just about every main component of the controller — from the body and thumbsticks to the face buttons and d-pad — and can virtually spin around your custom gamepad to see how it looks from all angles.

There's a good amount of color variety here; you can choose from among 15 colors for the pad's front, back, shoulder buttons and d-pad, whether you like things all black or want a loud mix of hot pink and baby blue. Strangely, the thumbsticks are limited to just seven colors, which means you might run into situations where you can't match them up with your d-pad or shoulder buttons.

There also aren't a ton of options for the face buttons, which come in either the default four-color scheme or various combinations of white and black. If you were hoping to, say, recreate the Super Nintendo's purple and pink buttons on your new Xbox pad, you're out of luck. Once you're done designing, you can add laser engraving at the bottom of the controller for an extra $10, for when you want to add something like your gamertag or the name of your favorite sports team (dirty words don't work — I tried).

I ended up settling on a blue-faced controller, with a red d-pad, backside and set of thumbsticks. It's subtle enough for my coffee table and bold enough to look custom made, and the final product that arrived on my desk looked every bit as pretty as the online mock-up. The site makes it easy for you to save and share your creations, which is useful for getting feedback from your friends before you bite the bullet.

Our custom Xbox One pad doesn't just look cool, it also boasts all of the same hardware tweaks that are coming to the standard wireless controller in early August. The gamepad now sports textured grips, which aren't nearly as pronounced as those of the Elite Controller, but still, they're pretty noticeable after you hold a regular Xbox One pad.

But the peripheral's most significant hardware upgrade is Bluetooth support, which is a godsend for those who plan to use it on a Windows PC. Using an Xbox One controller wirelessly on a PC previously required a $25 adapter; now, you can simply pair it directly to your computer with no extra dongles. It only took a few seconds for my custom controller to pair with my PC via Bluetooth, and the pad felt perfectly responsive as I beat up my cartoony foes in Rivals of Aether.

Those upgrades aside, the latest Xbox One controller touts the same comfy, ergonomic design that makes it our favorite overall gamepad. Unfortunately, Microsoft still insists that its controllers — even the $149 Elite — run on AA batteries, which is a bad look compared to Sony's rechargeable DualShock 4. If you want to be able to juice up the Xbox One controller, you'll have to shell out $25 for a battery pack.

The Xbox Design Lab is neat, but it's far from the only means of getting a customized Xbox One controller.

The Controller Shop is a popular third-party option, and it lets you whip up much crazier designs if you're willing to shell out more cash. After just a few minutes, I was staggered by the amount of aesthetic options the shop offers, including psychedelic patterns, glow-in-the-dark paint, custom graphics and even extra buttons. Xbox One controllers start at $110 at The Controller Shop, but will get notably pricier, based on which goodies you add on.

There's also Scuf Gaming, which offers customizable controllers that are aimed at professional gamers. Scuf's Xbox One controllers start at $119, and can be customized with various types of thumbsticks, d-pads, grips, rear-paddle buttons and trigger locks for faster firing. Scuf offers lots of color variety for just about every component, and you can get special controllers inspired by popular eSports teams.

The biggest complaint I hear from friends and co-workers is that the Design Lab doesn't support Microsoft's high-end Elite Controller, which has become a go-to accessory for Xbox and PC gamers alike. On the bright side, Microsoft is partnering with Scuf to offer custom versions of the Elite later this year.

Judging by the Scuf Elite site, you'll be able to get an Elite in one of five colors, as well as outfit it with many of the same special thumbsticks and paddles that come on Scuf's other controllers. There's no word on how much Scuf Elites will cost, but it's safe to assume it'll be more than the $149 standard Elite.

If you're in the market for a new controller that you can truly call your own, the Xbox Design Lab offers a pretty good value. For $20 more than the price of a standard Xbox One pad, you get to mix and match a whole bunch of fun colors, and can even add some personalized text for an extra $10. The controller's newly added Bluetooth support makes it a game changer for PC users, though you can also enjoy that feature (as well as textured grips) on the $60 standard version.

Third-party customizers such as The Controller Shop let you create far wilder and distinct designs, though at a notably higher cost. If you were hoping to customize an Elite, you'll have to wait for Scuf's option later this year. While I'd like to see some more color and face-button options, the Xbox Design Lab offers lots to like for folks willing to pay a bit extra for a controller that speaks to them more than the drab black one that came with their console.