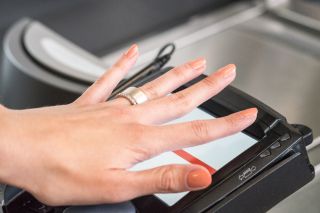 When I think of all the things I need in my life, a piece of smart jewelry is probably last on that list. But when I saw a demo of Token, a $249 security device disguised as a sleek sterling silver ring, I changed my mind.

At about 9mm wide and 2.5mm thick, Token looks kind of like a wedding band. It’s subtle enough to wear daily with a little bit of flair if you pick the 14-karat rose gold finish. But the ring’s underside belies its smarts. A fingerprint sensor and optical sensor are immediately visible, and baked inside are NFC, Bluetooth, an accelerometer and a secure element. That may seem like a whole lot of bells and whistles for a simple piece of jewelry, but Token is aiming to be much, much more.

Due out later this year, the ring is designed as a stand-in for everything that unlocks your life: credit cards, transit passes, car keys, workplace access cards, and even passwords.

Token’s built-in fingerprint sensor lets the ring act as your biometric second factor sign-in for all of the above. Token has a corresponding app for iOS, Android, macOS, and Windows 10, but you only need to use it once to add all of your credentials and authenticate your fingerprint like you would on your smartphone.

When you slip on the ring — scanning your fingerprint in the process — Token will continuously verify your identity. Take the ring off and the connection is broken, meaning anyone else who attempts to use your Token will be thwarted without your fingerprint.

The device’s secure element means that your credentials are stored locally, not on a server somewhere, similar to how Apple handles your credit card information with Apple Pay.

Token cofounders Melanie and Steve Shapiro were working on blockchain encryption and had no intention of designing a wearable device. But now they’re convinced that the potential of wearables is still untapped, and that the reason to wear a device on your body 24/7 has nothing to do with step-tracking.

“We think the killer use case for wearables is identity,” CEO Melanie Shapiro said. “Fitness is a great category, but it’s not the most compelling.”

Token won’t work everywhere once it ships in December, but the startup has nailed down partnerships with key players to ensure the ring can work in as many real-life situations as possible. Token is working with Visa and MasterCard to support tap-to-pay, an experience CTO Steve Shapiro said has an incredible “coolness factor” when people see it for the first time.

Integration with HID Global will allow Token wearers to tap their ring instead of a badge to gain access to their offices each morning. Users will also be able to wave their rings in front of transit card scanners to pay for subway fares in 40 cities around the world (though not in New York City, which will rely on swipe cards for the foreseeable future). Token expects an additional 20 transit systems will be compatible in 2018.

Token is producing its own NFC deadbolt so you can lock and unlock your front door by tapping the ring. The startup is also making a kit for your car so you can unlock its doors and activate the smart start button, no key fob required.

Then there’s Token’s goal of replacing your passwords. We all know that we need to be smarter about securing our accounts to prevent identity theft, and yet most of us end up reusing the same passwords across the various services in our lives. Turning on two-factor verification is a good idea, but waiting for an SMS code to arrive on your phone just so you can get into your Gmail account can be irritating and slow. Password managers that generate unique passwords on your behalf aren’t immune to hacks, and also require you to use a master password.

Melanie and Steve Shapiro envision a world where the ring they created can unlock anything in your life that requires a password or any other form of identity verification, so you can leave your house wearing just Token (and some clothes) and be able to shop, travel, drive — you name it. The company joined the FIDO Alliance to work with other companies who are implementing biometric authentication, and partnered with Microsoft to make the ring compatible with Windows 10. All you have to do is make a gesture, such as knocking twice on your laptop, to gain access to your Windows machine.

Token is available to preorder today and ships in December. The ring starts at $249 for a brushed sterling silver finish and $299 for the rose gold and black rhodium versions. All three are waterproof and last up to two weeks on a single charge. (Yes, this wearable comes with its own charger to add to your collection).

A deadbolt and car plug add an extra $100 each, or you can snag all three Token devices for $399. Stay tuned for a full review.