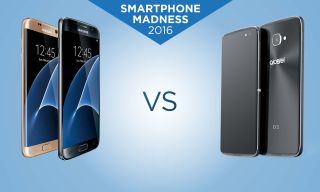 Editor's Note: Voting is over in this semifinal match-up, as Alcatel's phones move on to the finals against the BlackBerry Priv. The Alcatel Idol 4 and 4s captured 70 percent of the vote to defeat the Samsung Galaxy S7 and S7 Edge. You can cast your vote in the final here.

It’s a tag-team battle of the ages, as a tandem of phones from Samsung and Alcatel square off for the last spot in the Smartphone Madness finals.

In one corner, we’ve got Samsung’s Galaxy S7 and S7 Edge. Samsung’s newest flagships debuted with a splash, as critics praised the phones’ dual-pixel cameras, which can focus faster than cameras on rival phones, as well as the wider pixels that help produce great-looking shots even in low light. Add in a wider Edge screen and beefier batteries on both phones, and it’s no wonder that the Galaxy S7 has thrived in this competition, though it just managed to eke out a victory over the Xiaomi Mi 5 in the previous round.

MORE: Read Our Review of the Galaxy S7 Edge

The road to the Final Four has been much smoother for Alcatel’s Idol 4 and 4s, which scored a convincing win over Microsoft’s Lumia 950 and 950XL in the quarterfinals. It’s no wonder fans have rallied to support Alcatel’s new flagship, even though it has yet to ship in the U.S. The Idol 4 sports a stylish design and a programmable Boom button that you can customize to your heart’s desire. You’ll also be able to use the Boom for snapping photos or adjusting the volume of music.

MORE: Read Our Hands-On with the Alcatel Idol 4 and 4s

Will Alcatel’s Idol 4 lower the boom on the Galaxy S7? Or will Samsung’s phone manage to edge out another strong rival for a spot in the finals? You decide the winner, with voting in this semifinal matchup running through April 2 at 9 a.m. ET.

The reward for the winning phone? A place in the final on Monday, April 4 against the dominating BlackBerry Priv. But that match-up can wait until next week. For now, tell us whether the Galaxy S7 or Alcatel Idol 4 moves on.