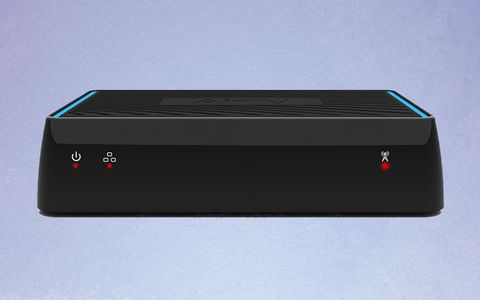 The AirTV rebroadcasts OTA content to mobile devices very well; it's just not that exciting.

Although it took me a while to warm up to the device, I ultimately enjoyed my time with the $99 AirTV Player from Dish. The cable-replacement company's Android TV box was a competent streaming gadget on its own but became something special when you considered its deft integration of HD antenna channels.

If you want the same slick HD-antenna integration but don't need a full-fledged streaming box to do it, check out Sling's new AirTV ($120), a streaming device that can rebroadcast your local channels just about anywhere.

The device does what it's designed to do very well. I'm just not sure that what it's designed to do is that exciting. The AirTV can rebroadcast your local OTA channels to a handful of streaming devices (both handheld and TV-adjacent), either in your house or on the go. But only a few platforms support it at present (Roku, Amazon Fire, iOS and Android), and the DVR functionality is limited.

MORE: Best Devices to Sling Your Phone or Tablet to a TV Screen

The AirTV covers the same ground as devices like the HDHomeRun and the Tablo, but it costs a little less and integrates particularly well with Sling TV. Like with the AirTV Player, there's probably a niche group of Sling TV aficionados who will find this useful, but I don't think the device solves all that many problems for the casual TV viewer.

The AirTV isn't a streaming player, like a Roku or an Apple TV. Instead, it hooks up to an HD antenna in your home, then rebroadcasts that signal to a Sling TV or AirTV app on other devices that you own. At present, you can watch antenna TV on Roku, Amazon Fire TV, Android and iOS; other operating systems should arrive in the near future. (Out of curiosity, I tried accessing antenna TV on both a Chromecast and an Xbox One. No dice.)

Because there's no navigable interface, setting up the AirTV is dead simple, although it takes a little time. You plug the device (a black box about 6 inches long by 4 inches wide) into a power outlet and connect an HD antenna to it. Any HD antenna will do, although the system doesn't come with one, so you'll need to purchase said antenna separately.

The AirTV isn't a streaming player. Instead, it hooks up to an HD antenna in your home, then rebroadcasts that signal to other devices.

Then, using either the Sling TV or AirTV app on Android or iOS, you follow a few simple prompts to connect your AirTV to your home network and have it set up a channel guide. You can use either Ethernet or Wi-Fi, which is a nice touch; most OTA-broadcasting devices offer only Ethernet connectivity.

Once that's done, you pretty much never need to even look at the AirTV again. You'll manage everything through your phone or tablet, although it'd be nice if you could get the same functionality on a computer or game console.

Once the AirTV is set up, there's pretty much only one thing you can do with it, and that's watch OTA television. I set up the service on my Android tablet, and I was pleased to discover that AirTV found 50 local channels, just like my antenna does when it's hooked up to my TV.

Finding shows to watch is also extremely easy, thanks to the Sling TV app's straightforward interface. The app lists whatever OTA channels you get in order of channel number, complete with a channel's colorful logo and full lineup of programs for the next week or so. It's easy to see what's on the air right now or what will be available later on. Tap on a show and select Watch, and you're done.

The AirTV app, useful in case you don't subscribe to Sling TV, is similarly straightforward. (A Sling TV subscription isn't required to use the AirTV, but if you do have one, you can incorporate the AirTV's channels with the rest of your Sling TV interface.) However, you can't use the Sling TV and AirTV apps simultaneously. You'll need to reset the hardware and go through the setup process again, which could be a tremendous pain if you cancel your Sling TV subscription.

At present, you can watch two simultaneous AirTV streams in your home, or you can watch one stream while away from your home network. In my experience, streams loaded right away and stabilized in HD resolution quickly at home, but they lagged terribly at work. Your results will depend a lot on your individual network setup, so obviously, having strong, stable connections at your locations will bolster your chances for a quality stream.

However, you can't DVR any content for later, even if you pay for that functionality in your regular Sling TV subscription. Sling plans to add this feature later, but it seems like launching with it would have been useful.

From a functionality standpoint, there's not much to say about AirTV, other than that "it works." I'm not convinced that it works any better than an HDHomeRun, a Tablo or any similar device, but it's certainly no worse.

The AirTV does allow easy streaming to a phone or tablet, which is helpful if you frequently find yourself watching live programs on mobile devices. Because the AirTV doesn't allow you to record programs (yet), the only time it could really come in handy is if you're away from home and absolutely need to watch something in real time from your local network — a ball game, perhaps. Frequent travelers could get some use out of this, although whether getting that functionality merits buying a $120 gadget is debatable.

Still, you could save money compared to getting a dedicated streaming service alone.

A decent antenna costs about $30, making the whole AirTV package $150. An HD antenna plus Sling's basic Orange package would give you something comparable to PlayStation Vue or YouTube TV's $40-per-month plans. Even within the first year, you'd see significant savings with Sling TV plus an AirTV: $390 for Sling and the AirTV, versus $480 for a cable replacement with more broadcast stations. This is worth thinking about if you mostly watch network TV.

Another useful application for the AirTV could be supplying real-time antenna TV to a location without antenna access. If you have a basement rec room or a cavernous living room where the TV is nowhere near the window, the AirTV could come in handy. The device could also be useful if you'd like to use a single HD antenna for two different TV sets in two different locations in your home — although, again, if both TVs are near windows, it's much cheaper to just buy another antenna.

For viewers who absolutely love network TV and want it fully integrated with their Sling TV experiences, the AirTV isn't a bad investment (although the AirTV Player is probably a better one). However, it's fair to ask why Sling TV is asking users to provide their own network stations rather than simply expanding its own offerings. The service should also work with computers and game consoles, rather than just handheld devices and two streaming players.

PlayStation Vue and YouTube TV, among other companies, have made great strides in including networks like ABC, NBC, CBS and Fox. Sling TV still offers a relatively small selection (NBC and Fox), and even then, only on its more expensive Blue tier ($25 per month). Because Sling TV's basic Orange package costs only $20 per month, I won't get into the complicated economics of the issue, but the fact is, the company is asking users to pay for a gadget to access something that its competitors provide as part of a monthly cost.

However, if you've already fallen in love with Sling TV and want a simple way to watch antenna TV wherever you go, the AirTV is probably the simplest way to incorporate those channels into your daily routine. For most people, though, connecting an antenna to a TV will still do just fine. Or you could always look into some more DIY options through media servers like Plex.