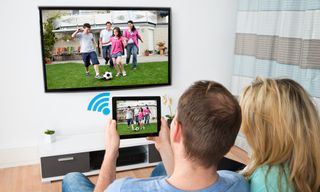 Streaming services are finally starting to replace cable as the go-to destination for hot shows, but broadcast TV has had one major advantage over its online counterpart: live television. Not anymore.

Editor's Note 11/10/2018: The holidays are upon us and we're crawling the Internet to bring you the best Black Friday TV deals of the season.

If you thrive on live TV but don't want to pay exorbitant cable costs, a cable-replacement service might be the way to go. These streaming programs are just like cable or satellite subscriptions, complete with live broadcasts and a variety of familiar channels, except they come over the Internet rather than through analog cables or satellite signals.

DirecTV Now, Sling TV and PlayStation Vue are currently the most recognizable of these services, and the three are fairly similar in practice. They're not alone, though, as YouTube TV and Hulu with Live TV (currently in beta) joined the fray more recently. These services include channels such as E!, FX, TBS and TNT, ESPN, AMC, Cartoon Network, HBO and Univision, although the exact lineup varies depending on the provider in question.

All five services have dozens more channels available, and you can watch them all in real time, just as you would on a standard cable subscription.

Because these services provide regular broadcast networks like CBS and Fox, they are arguably the most complete live TV replacement you can get online. They don't come cheap, though.

A basic Sling TV package costs $20 per month and gives you about two dozen channels. You can add more, but prices and the number of channels vary, from 24 Spanish channels for $5 per month, up to HBO alone for $15 per month. Sling also offers its basic packages in Blue and Orange configurations, and charge $40 per month if you want both.

Depending on the market you live in, PlayStation Vue subscriptions can begin around $30 per month for more than 45 channels, whereas its more-available, nation-wide plan includes 49 channels for $40. Prices run up to $75 per month if you want more than 100 channels, although both selection and pricing vary by region.

If you haven't cut the cord yet, you can watch live TV online very easily. DVR boxes from companies like Slingbox, TiVo, Dish, Verizon and lots of other providers can usually stream content from your primary TV to a computer or mobile device. The ways of doing so vary, depending on whether your box is from your service provider or a third party. But if you have a cable or satellite subscription, you have lots of options.

The five largest cable providers in the United States are Comcast, Time Warner, Cox, Optimum and WOW!. The first four have apps for computers, mobile devices and/or TVs, which let users access their full accounts even when they're away from their TVs. This, however, is not the easiest way to access cable content.

It's even easier to use apps for channels directly. Tons of paid channels, from Nickelodeon to FX to Syfy to National Geographic, have apps on mobile and streaming devices that only work (or only work at full capacity) if your cable provider gives you access. This could allow you to watch your favorite shows on the go, or simply buy a streaming box for a secondary TV rather than rent a second cable box at an exorbitant fee.

If you want live TV but don't want a cable or satellite subscription, an HD antenna is the easiest way to get it. An HD antenna, like its old rabbit-eared counterpart, picks up local TV signals from the airwaves and shows them on your TV, no subscription fee required.

Depending on where you live, this could net you anywhere from a dozen to a hundred channels. HD antennas usually cost between $20 and $50. Tom's Guide liked the Mohu ReLeaf ($40) for urban dwellers and the Mohu Curve 50 ($80) for those who live farther from a broadcast source.

There's a niche market for rebroadcasting content from HD antennas, and it's a larger niche than you might think. There are devices that take an HD antenna signal from your house and broadcast it to a computer, mobile device or TV anywhere else in the world (or at least the country).

There's no subscription fee — at least in theory. You simply set up an HD antenna in your home, plug it into a streaming box and let that box broadcast the signal anywhere you want, in real time. (Some devices can plug directly into your TV; others require you to use an app on a streaming device.)

The most popular HD antenna rebroadcasters are the Channel Master DVR+ ($250), the Tablo ($220) and the Simple.TV ($200). (All models listed are the basic designs.) Each one functions a bit differently, but the bottom line is that you can watch whatever live broadcast TV you receive in your home, on whatever device you choose. Even Plex has gotten in on the action, offering recording functionality to anyone with an HD antenna and an HDHomeRun box.

This can get a little expensive, however, if you decide you want DVR capabilities as well. Some boxes have subscription services that lets you record programs, and they range in price from $5 per month up to $150 for a lifetime subscription. Still, it's an awful lot cheaper than subscribing to cable or satellite TV.

When streaming video first started to take off, analysts and fans alike predicted that someday, viewers would be able to simply purchase channels à la carte over the Internet. This hasn't happened across the board yet, but companies are slowly working toward it, with both broadcast networks and premium channels offering stand-alone subscriptions.

CBS All Access ($6 per month) is one of the only major networks to go completely streaming, with access to both live TV and recorded programs. The service has proved divisive, since it's the only way for American viewers to watch the excellent Star Trek: Discovery series. Other networks will likely follow suit in the near future.

Premium channels have actually been quicker to adopt this strategy than their network counterparts. HBO Now ($15 per month), Showtime ($11 per month) and Starz ($9 per month) offer both live and recorded versions of the TV channels.

Four major live channels may not sound like much (plus some smaller ones, like Skitter TV on Roku, but the selection is pretty anemic). Still, it's a promising start for what could become a major way to watch live TV online.

There are a few other options, if you insist on getting news for free (or at least much, much cheaper). Services like Sky News, Post TV and Bloomberg TV are available on set-top boxes like Roku and Amazon Fire TV, and these stations play live news from anywhere between a few hours and a full 24 hours each day. Most set-top-box app stores have a News section, where you can learn more about your choices.

For those who want something on a smaller level, lots of local news programs on broadcast networks (like Fox 5 News at 11 in New York City, for example) play for free online. Simply visit your local affiliate's website, find the news section and see if it offers a live stream. It probably does, although many of them function only on computers, rather than mobile devices or set-top boxes.

Sports can be tricky to stream, in either live or recorded form, and availability varies by platform. Almost every major sports organization in the United States has its own streaming service, from MLB.tv ($110 per season) to NFL Game Pass ($50 per season for prerecorded games).

Signing up for a streaming sports service is as simple as visiting your preferred sport league's website and clicking on the Streaming or Watch Online section. Prices tend to vary, depending on how many games you want to watch and how many teams you want to follow, but you can expect to spend about $100 per year. You can even watch some big games, such as the Super Bowl, for free.

There is, however, one big caveat: Due to licensing agreements, the streaming services cannot show games covered by your local stations. You'll need to stick with an HD antenna (and possibly one of the rebroadcasting devices) for that.

Currently, the best way to watch live TV online is — ironically — to have an existing cable or satellite subscription. Slowly but surely, though, cord cutters are gaining access to real-time channels in addition to pre-recorded content. Live TV could be the next big frontier for streaming video, but until then, watching shows as they happen requires a little dedication and creativity.