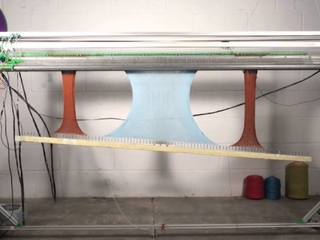 Imagine if you could "print" a knitted sweater, like you would a plastic 3D printed object like a smartphone case or a bowl.

That's the idea behind OpenKnit, a loom-like device that can take digital .STL files — the most common 3D printing file — and turn them into a finished piece of knitted clothing.

In this case, the knitting needles take the place of a 3D printer's extruder, and the yarn the place of the plastic filament.

OpenKnit isn't fully autonomous yet; as shown in the video that creator Gerard Rubio posted, you still need to tweak some aspects of the design by hand during the knitting process. But the eventual goal is a machine that can take .STL files and directly fashion them into custom clothing and knitted accessories.

The OpenKnit draws heavily from RepRap, a design movement that aims to create a self-replicating 3D printer. OpenKnit can also use software from another knitting machine called Knitic that works similarly to OpenKnit but doesn't use .STL files.

Like these projects, OpenKnit is open-source, meaning it shares its designs and software code publicly, and encourages people to take and modify them. So really enterprising designers could create their own OpenKnit device by getting the designs at its Github page. Rubio says the whole thing costs less than 550 Euros — about $750 USD.

OpenKnit isn't the first clothing 3D printer-like machine — the Electroloom is a prototype 3D printer that prints polymer fabrics. Unlike the Electroloom, however, the OpenKnit can turn out finished clothing.

Rubio says the OpenKnit is designed to provide an alternative to the industrial production model from which most commercial clothes come, and to give users more control and connection to their own clothing. "Designing and producing clothes digitally and wearing them can now happen in the very same place, rewarding the user with the ability to make decisions regarding creativity and responsibility," he wrote on his website.