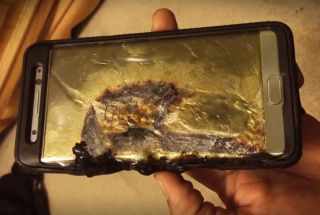 Samsung is vowing that the next smartphone you buy from the company will undergo more thorough quality assurance testing to avoid the kind of design and assembly problems that caused the batteries in Galaxy Note 7 phones to overheat.

Samsung outlined its more stringent safety process during a press conference in South Korea where the company revealed its findings after several months of investigations into the problems that caused the Note 7's recall last fall.

"We are taking responsibility for our failure to ultimately identify and verify the problems with design and manufacturing prior to the launch of Note 7," said DJ Koh, president of the mobile communications business for Samsung Electronics.

As was widely expected, Samsung put the blame for the overheating and explosions of the Note 7 on the device's battery. Specifically, the problems arose from batteries that came from two different suppliers.

Batteries from Manufacturer A didn't provide a cell pouch with enough room for the battery to expand, which happens as the battery charges and discharges. (Samsung didn't reveal the names of the suppliers at its press conference.) Meanwhile, Manufacturer B ran into assembly problems where weld defects were left on one side of the battery; as the battery swelled during normal charging, those defect were pushed into the opposing electrode, causing a short circuit. Even worse for Samsung, that assembly problem wasn't initially detected while Samsung was busy with its initial recall of the Note 7.

To determine the cause of the Note 7's woes, Samsung said it built a large-scale charge and discharge facility where it could replicate incidents involving the phone overheating and exploding. The company's investigation included examining both hardware and software for for a cause, as well as the assembly, testing and logistics parts of brining the Note 7 to market.

Samsung says 700 engineers analyzed 200,0000 fully assembled Note 7 devices as well as 30,000 batteries to narrow down the cause of the Note 7's problems. The company also hired three independent firms — safety science firm UL, engineering and scientific consulting company Exponent and TUV Rheinland, which inspects testing and certification — to look into the incidents as well.

So how does Samsung prevent similar problems with future phones? "We used the lessons from this investigation to improve upon our robust quality and assurance process and establish comprehensive preventative measures," Koh said.

To that end, Koh says Samsung plans to implement a broad range of internal processes focused on product safety, building on its existing quality assurance efforts with teams that will now focus on each core component of its devices. It's forming a battery advisory group staffed by academic and research experts who will provide Samsung with a review of device safety.

Most significantly, Samsung says it's developed an eight-point battery safety check that will include visually inspecting each battery, x-ray batteries to search for abnormalities and large-scale charging and discharging tests. Samsung also runs tests to make sure the volatile organic compound in its batteries won't leak and checks for any change in voltage during the manufacturing process It will also run tests to simulate accelerated usage scenarios and take batteries apart to assess their quality.

Samsung didn't specify what steps in its quality assurance process are new versus the steps it was taking during the Note 7's assembly, though.

Koh also promised changes at the design stage for batteries that will include more space around the battery and a new bracket design as well as improve safety standards for materials in the battery's design.

"We hope this case will serve as an opportunity to improve the safety of lithium ion batteries, not just for us, but for the entire industry," said Koh, who promised that Samsung would share its findings with global standard groups.

Samsung's announcement comes as the company is gearing up to release the Galaxy S8, its first major smartphone release since last fall's disastrous Note 7 launch. That phone will reportedly debut in April, though we could hear more about it at next month's Mobile World Congress.