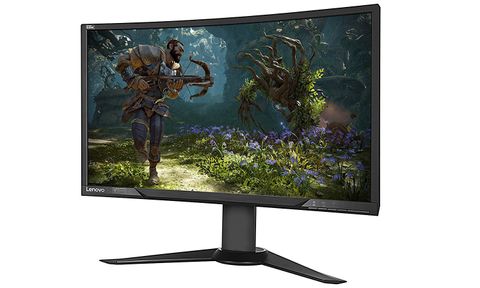 The Lenovo Y27g RE offers decent brightness and color within a curved G-Sync display, but its superfluous features don't justify its high price.

When I tested the Lenovo Y27g RE with a variety of games, I was underwhelmed. When I read its price— $650— I felt even more uneasy. The Y27g RE features a bright screen and a wide range of colors, but beyond that, it's thoroughly unimpressive. Its colors are inaccurate; its menus are sluggish and unintuitive; its extra features add nothing useful.

Most importantly, in a world where you can get a rock-solid 4K monitor for less than $600, charging $50 more for a 1080p monitor makes for a tough sell. The curved screen and G-Sync support may be worth the price of admission for some people, but otherwise, there are cheaper monitors more worthy of your money.

The 27-inch Y27g RE features a curved screen and a black plastic chassis with colored lighting on the back. (Why, exactly, a monitor needs colored lighting, or why you'd put said lighting where you can't see it, is just one of the device's many mysteries.) The monitor looks inoffensive enough, with just a few architectural flourishes.

Adjusting the Y27g is also fairly simple, since you can tweak height and angle just by pulling and pushing at the monitor. Lenovo is also quick to highlight a removable mount, a "headphone hook" to hang audio cables and a cover that hides wires in the back. Everything works as advertised, although the bells and whistles don't add much.

Since one of the monitor's biggest selling points is its curved design, I should point out that I found this layout neither helpful nor distracting. At 27 inches, the screen is not really big enough to provide significantly more immersion than a flat display can. Some players prefer curved screens, and more power to them, but if you were wondering whether this feature is a necessary upgrade for your PC gaming experience, the answer is a definitive "no." The curved screen also adds a few hundred dollars to the price, so think carefully about whether you really need such a design.

The Y27g features four USB ports: two on the side and two on the back. You can use the two on the side to charge gadgets even when the monitor is off, which is a fairly useful feature. Otherwise, the monitor has an HDMI port, a Display Port and an audio jack. Curiously, the system has no speakers, so routing your sound through to headphones will take a little fiddling in the Sound menu. While monitor speakers tend to produce pretty lackluster sound, it's beyond me how a $650 monitor got away with excluding them.

Where the system really falls down, though, is in its interface. Even by the relatively clunky standards of gaming-monitor menus, the Y27g RE has unintuitive, confusing, sluggish navigation that's not only error-prone, but just plain ugly as well. The monitor has five buttons on its lower-right side (not counting the power button), and each one can open a separate menu option and help you navigate the menu.

In theory, it is simple enough: Each button can advance the menu, bring it back a level, confirm an option or cancel it. In practice, because the buttons lack labels and all look exactly the same, you'll probably wind up fumbling through every option. And there are a lot of options, from choosing gaming presets, to adjusting individual parts of the color spectrum, to fiddling with protocols in order to smooth out the frame rate.

Some options aren't easy to find, either. One rather useful feature allows you to track a game's frame rate, but I spent a good 5minutes poring through every possible option to find it, and had no luck. Eventually, I stumbled on it, completely by accident, buried underneath the color presets for various genres of games. Every time I had to use the Y27g's menu, it reminded me of how profoundly I never wanted to use the Y27g's menu ever again.

I tried out the Y27g with Overwatch, StarCraft II: Nova Covert Ops, The Witcher 3: Wild Hunt and Marvel Heroes. The monitor itself did a fine job at displaying each game at full 1080p with frame rates ranging from around 70 fps to 120 fps, depending on the game. (This is also highly dependent on what kind of system you have, but the Y27g supports a refresh rate of up to 144 Hz.)

Things went downhill, however, once I started using the monitor's recommended presets for various kinds of games. FPS 1 made my Overwatch match look incredibly blue; FPS 2 made it look incredibly red instead. RTS mode darkened StarCraft II; I'm still not clear on how making the screen darker and less colorful is supposed to aid real-time strategy players. The Game 1 mode I tried with Marvel Heroes was probably about as good as the presets got, making the Marvel Universe look bright and just a little over saturated. Game 2 for The Witcher 3 put the screen right back at dull and dark. Honestly, the best mode for gaming is just to leave the presets off entirely, which made me wonder why Lenovo bothered including them at all.

The Y27g RE is an Nvidia G-Sync monitor, meaning it can theoretically give you smoother frame rates and less screen tearing when used in conjunction with Nvidia graphics cards. I tried the games both with and without G-Sync enabled, and it didn't make too much of a difference. G-Sync stabilized the frame rate a little more, but on a powerful system, it's honestly hard to tell. For those with lower-end graphics cards, G-Sync could be a useful feature — but keep in mind that G-Sync functionality is one of the reasons this monitor costs so much, and your money might be better spent upgrading your system.

The only two areas where the Y27g RE really excels are in its brightness and color gamut. The system puts out 313 nits of brightness, clobbering the category average of 247, as well as the scores of competing 1080p models like the BenQ RL2455HM (270) and the Samsung CFG70 (266). Furthermore, the Y27g can produce 128 percent of the sRGB color spectrum, while the BenQ weighs in at 102 percent. (The category average is 107 percent.) Still, the Lenovo's score is hardly unprecedented; Samsung’s monitor scored 152 percent.

Even though the Y27g can produce a lot of colors, they're not necessarily that accurate. The monitor's Delta-E for color accuracy came in at a lackluster 4.2, failing to meet the category average of 3.7. (Numbers closer to zero are better.) The BenQ is better, at 3.8, as is the Samsung, at 2.3.

Here's the real kicker: The BenQ monitor discussed here costs $190, while the Samsung monitor costs $350. Even though those monitors may not score better on every single metric, the differences are minor enough to forgive on such a significant price scale, and the Samsung monitor is even curved.

The Y27g RE comes with about half a dozen different gaming presets, although surprisingly, there are none for movies, TV, productivity or other things for which you might need an expensive monitor. As discussed above, the presets generally make gaming worse, not better, and you're better off fiddling with the color settings manually, if you have the patience for it.

Also, as mentioned earlier, the monitor has Razer Chroma lighting on the back — sort of. Since the monitor runs via the Lenovo Artery software, you can make the screen display a static color, or breathe, or cycle, but you can't sync it up with your other Razer Chroma gadgets. As a result, it was profoundly annoying when my Razer Ornata keyboard and DeathAdder mouse were cycling in perfect sync, and the monitor lagged just a few seconds behind.

Furthermore, while the colored lights may look pretty at a tournament or if you have a very open gaming setup, I don't think the average player would see them very often. You can't see the lights while you're gaming. And if the back of your monitor faces a wall, you won't really see them under any other circumstances, either. It's a baffling feature that adds nothing substantial, except cost.

Perhaps the Y27g costs so much because Lenovo is betting people will buy the monitor in bundles with new Lenovo gaming rigs. (It's the same reason why Lenovo still produces its own dreary line of mice, keyboards and headsets.) If you're picking up a Lenovo machine and the Y27g RE is the monitor that comes with it, so be it; it looks OK, provided you can ignore the presets.

On the other hand, if you don't have to buy the Y27g, don't. Its mediocrity would be forgivable if it weren't so hellaciously expensive. When you can get a perfectly good 1080p monitor for one-third of the price, and a perfectly good 4K monitor for $50 less, you can't help but suspect that something has gone wrong.