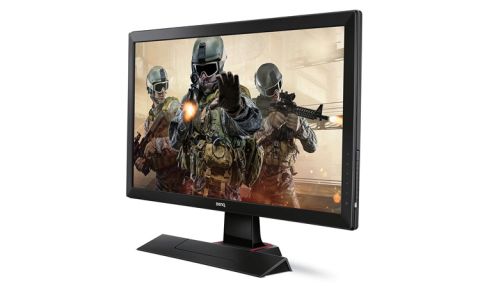 The BenQ RL2455HM is a crisp and affordable gaming monitor that's built for strategy games but excels with any genre.

Gaming accessories are becoming more and more tailored toward competitive gamers, and gaming monitors are no exception. BenQ's RL2455HM is built primarily to give real-time strategy players an edge, offering two distinct display modes meant to make it easy to spot your characters amidst the chaos of games like StarCraft II and Dota 2. Fortunately, the 24-inch RL2455HM serves its purpose and then some, with a crisp, responsive 1080p screen that makes any type of game look good — all for an inviting, sub-$200 price tag.

The BenQ RL2455HM's no-frills design keeps you focused on your game, with nothing but a small strip of red on the bottom to distract you from its all-black aesthetic.

While the monitor has the same attractively curved base as the rest of the RL family, it lacks the rubberized controller dock or headphone stand of its 27-inch counterpart, the RL2755HM.

It's also not terribly adjustable; you can tilt the screen 15 degrees back or 5 degrees forward, but that's about it. Of course, this might not be a problem considering the 2455HM is built for competitive gamers, who play close to their screens. And while BenQ's XL displays have far more articulation, they're also much pricier.

The RL2455HM sports a standard array of inputs, with two HDMI ports, a DVI port and a D-SUB input. For your audio needs, there's a line-in port as well as a headphone jack. Below each port is a small graphic that tells you which input is which, eliminating some of the guesswork of plugging your cables into some fairly obscured connections.

On the right edge, you'll find the monitor's five physical navigation-buttons, as well as a power switch. The RL2455HM uses BenQ's traditional on-screen interface, with tabs for switching among picture modes, changing the size of the display and pulling up a deeper main menu that lets you tweak settings such as brightness, contrast and sound. As is the case with most BenQ monitors, I was a bit disappointed by the RL2455's lack of dedicated volume buttons.

The RL2455HM is primarily aimed at real-time strategy competitors, and since its default RTS1 mode is optimized for StarCraft II, I began my testing by feverishly trying to click a bunch of alien enemies to death.

BenQ's monitor served its purpose dutifully; in a game that floods the screen with characters, vehicles and bases, I had no issues keeping track of what was what. But since I know as much about RTS games as most linebackers know about ballet, I enlisted my colleague and office StarCraft expert Marshall Honorof to help decide if it truly did the game justice.

We agreed that the RTS1 mode's extra brightness and nonsaturated colors made it easy to see all of the on-screen mayhem clearly, and were particularly useful for differentiating between teammates and enemies. I was also impressed by how well the monitor presented the game's detailed character close-ups, as well as its lack of any game-disrupting input lag.

Aside from performing well for RTS games, the RL2455HM had no issues handling every punch, kick and fireball of Ultra Street Fighter IV, a brawler that demands precise inputs. I didn't notice a hint of lag as I pulled off long, difficult combos, and the game's highly animated characters moved fluidly and looked vibrant as they fought against colorful backdrops.

While built for competitive gamers, the RL2455HM did an excellent job immersing me in the gloomy chaos of Batman: Arkham Knight. The game's 1080p, 60-frame-per-second thug-punching action felt incredibly smooth on BenQ's monitor, and its graphics, from the realistic raindrops to the neon lights sprinkled over Gotham's vast skyline, simply looked stunning.

The RL2455HM's high responsiveness was backed up by our lab test, in which the monitor registered a speedy 9.8 milliseconds on the lag tester. That's notably quicker than our 15-ms average, and makes the BenQ the fastest monitor we've tested yet.

The RL2455HM is one of the brighter monitors we've tested, registering an impressive 269.8 on our brightness test.

BenQ's monitor also proved to be satisfyingly colorful, producing 101.77 percent of the Rec. 709 color gamut. That's stronger than our 97 percent average, and only a smidge behind the ViewSonic's 102.6 percent. The RL2455HM was fairly color-accurate as well, with a Delta E rating of 3.75, which trumps the ViewSonic's 5.7 as well our 5.2 average (closer to zero is better).

The RL2455HM's two RTS modes are the clear centerpieces of the machine; in fact, the monitor defaults to RTS1. The first RTS mode is built for StarCraft II, while the second is optimized for popular battle-arena game Dota 2.

Both modes are extremely bright, sharp and built to highlight in-game characters, though I noticed that RTS2 mode offered slightly deeper colors. This difference makes sense; StarCraft is, overall, the more cartoony and colorful game of the two, and RTS1 mode dials that back for competitive matches.

RTS settings aside, BenQ's monitor offers more neutral-looking Standard and sRGB modes, the former of which I found suitable for all of the nonstrategy games I played. There's also a Movie mode, an energy-saving Eco mode and three "Gamer" presets that you can customize to your liking.

The RL2455HM's 2-watt speakers work fine, but you'll need to plug in speakers or headphones if you want immersive audio. While the sounds of Batman's jaw-breaking punches and StarCraft's mech-on-mech combat sounded crisp, they were quickly overpowered by the sound of nearby office chatter, even with the speakers at full volume.

As a monitor built to deliver maximum clarity and responsiveness to competitive strategy gamers, the BenQ RL2455HM hits the mark and then some. This crisp, 24-inch display offers useful, dedicated presets for two of the genre's most popular games, and is bright and colorful enough to work well with just about any other game. While it lacks the physical flexibility of BenQ's XL series, the RL2455 is one of the best all-around gaming monitors you can get for under $200.