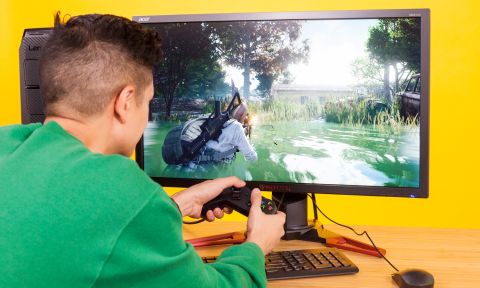 The Lenovo Legion Y720 Tower is easy to upgrade and comes with either AMD or Intel configurations.

Those options make the Legion an optimal starting place, especially because it's so easy to upgrade. But out of the box, the Legion isn't as strong as some competitors, especially for the price.

Lenovo's design language hasn't changed much over the years, which means the Legion Y720 is bulky and black, with aggressive angles and red lighting. The front panel is coated in soft-touch carbon fiber, but the rest of the machine is all metal.

Unlike on the more premium Y920, there are no windows on the sides — just black aluminum. On top, there are some red ridges and a carrying handle, which you'll appreciate when you try to lug it around.

The front of the Y720 has a solid set of ports that will let you hook up most peripherals quickly and easily. There's an SD card slot, two USB 3.0 ports, a pair of USB 2.0 ports and headset and mic jacks. But, I would like USB Type-C ports, as we're seeing that on more and more systems.

It would also be nice to see a front-facing HDMI port for easier VR setup (at least, if you have a configuration with a GTX 1060 or 1070). For those of you who are still not using Steam for your games, there's a DVD-RW drive on the front of the machine.

Turn the Legion around and you'll find another four USB 3.0 ports, an Ethernet jack, a PS/2 port for legacy peripherals, optical audio out, two Mini DisplayPorts and two HDMI outputs, as well as a DVI port for older monitors.

It's a literal snap to get inside the Legion if you want to upgrade it. After flipping a lock switch on the back of the machine, pressing a release button on the top of the machine snaps the side panel off, providing access to the GPU, power supply, RAM, CPU and fan and storage — all without any tools. (They're secured with hand screws.)

Pinching three tabs on the inside of the case let you pull off the front panel for easy access to the DVD drive and front-facing case fans.

When I played Middle-earth: Shadow of War on the Legion at 2560 x 1440 and Ultra settings, the game ran between 48 and 51 frames per second as I fought off a horde of orcs. When I turned it down to Very High, the frame rate jumped to between 58 and 64 fps.

The Legion's Core i7 CPU and GTX 1070 GPU make for a very powerful machine, though some competitors have it beat.

You'll want to go out and buy a nice gaming keyboard and mouse, because the ones that Lenovo packs in, while usable, are not up to snuff for intense play sessions.

The wired mouse has two buttons and a scroll wheel (which is a little stiff for my liking). The keyboard's keys are on the mushy side, and I typed at 102 words per minute with a 3 percent error rate (below my usual 107 wpm and worse than my regular 2 percent error rate).

There are shortcuts for volume, media playback and settings, but nothing for gaming, like dedicated macro keys or a button to launch Nerve Center.

Lenovo's gaming software is called Nerve Center, a multifunction app with options for both play and aesthetics. Besides giving you information about your setup's specs, it also lets you control the LEDs on the front of the unit. You can't change the color like you can on the more powerful Legion Y920, but you can adjust the brightness. Additionally, it lets you give certain games network priority and can be set up to autolaunch the included Dolby Audio app for surround sound during gameplay.

The only big piece of junk is a free trial of McAfee LiveSafe. Everything else is the type of software that's included on every build of Windows 10, like Twitter, Drawboard PDF, Candy Crush Soda Saga and March of Empires: War of Lords.

Lenovo sells the Legion Y720 Tower with a one-year warranty.

The Lenovo Legion Y720 Tower is a dependable machine with a GTX 1070 and a chassis that's easy to open and upgrade. And if you want it in either an Intel or AMD configuration, there are plenty of options for you.

But in our benchmarks, it wasn't as powerful as some other computers. If you're looking for more power, the Dell XPS Tower — with its 8th Gen Core CPU and GTX 1070 GPU — was a stronger performer, includes a USB Type-C port and is cheaper when similarly configured (just $1,149.99).

At a similar price, you could also go for the Corsair One, which is smaller but more powerful with a GTX 1080, but you'll lose out on the option to upgrade in the future.

But, if you want a daily driver in any starting configuration you want, Lenovo offers plenty, and you'll always be able to upgrade in the future.