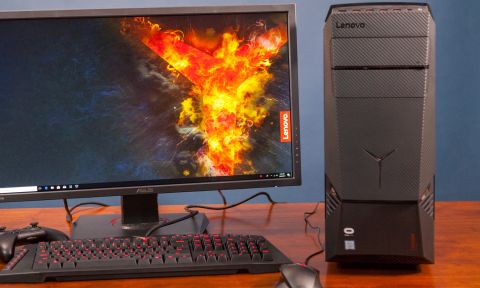 The Lenovo Legion Y920 Tower brings some welcome changes to Lenovo's trademark desktop design, including much-improved LED lighting, future-proof ports and a better chassis that makes upgrading even more of a tool-free process. The desktop's Core i7 processor, GTX 1080 GPU and impressive peripherals make it an enticing starter kit for high-end PC gaming, though its premium $2,399 price is notably higher than the competition.

Much like Lenovo's older Ideacentre gaming desktops, the Lenovo Legion Y920 is a big, angular black box that favors simplicity over style. It's got the same attractive, patterned front panel as previous models, as well as a big window on the left panel that lets you gaze at the machine's red-backlit guts.

The biggest improvement to the Y920's design is in the lighting. While Lenovo's previous gaming desktops were stuck with red, the company seems to have taken some cues from its Razer-edition Y900 and given gamers the ability to light up the PC however they see fit.

Using the Lenovo Nerve Center app, you can customize the PC's big, front-facing LED "Y" logo as well as its two surrounding light strips. You can have the zones grow a single color statically, blink on and off, or gradually cycle through the entire rainbow. Better yet, you can have the PC's lights react to your desktop's audio output, adding some extra flair to those big Call of Duty explosions.

The Y920's front-port selection features two welcome additions that are becoming more and more common on gaming PCs: a front-facing HDMI port for easy VR setup, and a USB Type-C port for use with more modern gadgets. Aside from that, you've got easy access to four USB 3.0 ports as well as a headphone jack.

In the back, you'll find two USB 2.0 ports as well as four USB 3.0 ports that are marked with the Oculus logo, so you know where to plug in your VR headset. Other amenities include an Ethernet port, a PS/2 port for older accessories and a full suite of audio jacks. The system's Nvidia GTX 1080 graphics card packs three DisplayPorts as well as an HDMI connection.

Getting inside the Y920 is a breeze: simply flick open a lock and press a button up top, and the side panel pops right off.

Getting inside the Y920 is a breeze: Simply flick open a lock and press a button up top, and the side panel pops right off. From here, you'll have easy access to the machine's components and can swap out the RAM, storage and even the graphics card without having to bust out any tools. The whole process isn't quite as seamless as it is on the Alienware Aurora or Dell XPS Tower (you'll still have to fiddle with some hand screws), but I appreciate that Lenovo has made its Legion tower fully upgradable without the need for a screwdriver.

Thanks to its Nvidia GTX 1080 processor, Lenovo's Legion Y920 Tower tears through high-end games and VR experiences with aplomb. The system let me crank Injustice 2 to its absolute max, exposing every tiny detail in each hero's spandex suit while still letting me enjoy smooth 60-frame-per-second fights at 1440p and 30-fps battles in 4K.

The desktop had no issues rendering the lush environments of Rise of the Tomb Raider, turning in a smooth 77.7 fps on our benchmark (1080p, max settings). That tops GTX 1080 competitors such as our MSI Infinite (65 fps) and Corsair One (72 fps), as well as our 68-fps average. Like similarly specced machines, however, the Y920 did fall to a slightly less-than-playable 28.15 fps when we cranked the same test to 4K.

The Y920 let me crank Injustice 2 to its absolute max, exposing every tiny detail in each hero's spandex suit while still letting me enjoy 30-fps battles in 4K.

Lenovo's PC chewed through the beautiful but less demanding action of Hitman, running the game's benchmark (1080p, max settings) at a zippy 97.3 fps. That's not quite as smooth as what the MSI Infinite (123 fps) and Corsair One (129 fps) turned in, but it is better than our 90-fps gaming average.

As with most GTX 1080 machines, the Y920 maxed out the SteamVR Performance Test with a score of 11 (our gaming-PC average is 10.4). That means it's more than ready for any experience you want to throw at it on your Oculus Rift, HTC Vive or Windows Mixed Reality headset.

Packing an Intel Core i7-7700K processor and 16GB of RAM, the Lenovo Y920 has plenty of multitasking muscle for when you're doing more than just gaming. Even while playing Injustice 2 in 4K, running a system scan and hopping between a dozen browser tabs all at once, I never noticed any significant slowdown on Lenovo's machine.

Considering how many gaming desktops ship with generic mice and keyboards (or none at all), I was pleased to find two gaming-grade peripherals bundled with my Y920.

Lenovo's Y Gaming Mechanical Keyboard is big and beastly, with aggressive red backlighting and tons of extra keys for using macros and controlling media playback. While the keys won't compete with those of a high-end Razer or Logitech keyboard, I found them to have a satisfying, clackety feel — especially as I zoomed through a typing test at 106 words per minute with near-perfect accuracy.

You can adjust the backlighting for the entire keyboard, or opt to just highlight the WASD and arrow keys. The macro keys allow you to program up to six sequences on the fly, and there's a handy button for disabling the Windows key in order to prevent accidental pauses. While Lenovo's keyboard is a bit bulky for my tastes, it uses that space to pack in tons of useful features.

The same can be said about Lenovo's Y Gaming Precision Mouse, which has a similarly big, in-your-face design. The mouse sports a cozy, textured thumb rest, as well as a total of four extra, programmable buttons on the left side. The accessory's DPI switch has a useful LED light to show your sensitivity level, and it even packs removable internal weights that you can use to adjust the overall feel to your liking.

While you might want to eventually spring for something more premium, the Y920's included accessories are more than solid enough for gaming right out of the box.

Aside from letting you tinker with the LED lighting, Lenovo's Nerve Center lets you view overall system performance, overclock your machine, toggle a Network Priority mode for faster online gaming and turn on Dolby-enhanced sound.

Outside of Nerve Center, the Y920 packs the usual suite of Lenovo extras. There's a Lenovo Companion app that lets you check for updates, access tech support and monitor your system health, as well as a Lenovo Account Portal app for quickly logging into the Lenovo forums and shopping online.

Configurations: How Much Does the Legion 920 Cost?

We reviewed the beefier $2,399 model, which is available on Amazon and packs the same CPU and RAM with a larger 256GB SSD as well as a more powerful Nvidia GTX 1080 graphics card.

With an easily upgradable design, much-improved LED lighting and powerful VR-ready guts, the Legion Y920 is one of Lenovo's most impressive gaming desktops yet. However, its $2,399 price tag is a lot to swallow, especially when compared to some of its bigger competitors.

The MSI Infinite, for example, offers similar specs and even better lighting options for just $1,799, though it's not quite as easy to upgrade without tools. A similarly specced Alienware Aurora (our favorite overall desktop) will run you $1,969 and has even better upgradability, though you'll have to pay extra if you want a gaming-grade mouse and keyboard. There's a lot to like about the Y920's performance and ease of use, but you can get just as much power for a lot less.