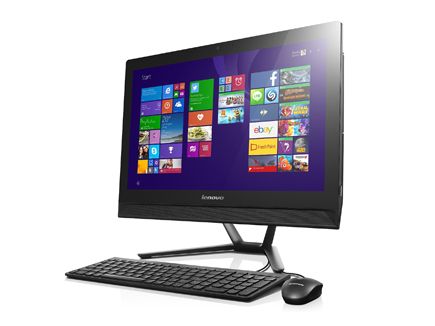 If you can find it for less than full price, it's easy to like Lenovo's C40 all-in-one with its 21.5-inch display and handy HDMI-in port.

A big problem with all-in-one PCs is that, because the internals are built into the screen, you usually have to toss out a perfectly good monitor when the components get old and outdated. But on its C40, Lenovo thoughtfully added an HDMI-in port so that your all-in-one can double as a standalone display. This adds convenience and extends the life of the system even after it's become slow and lethargic. And with street prices hovering around $450 on Amazon for an AMD A6 CPU, 8GB of RAM, DVD drive and a 1TB HDD, you get way more for your money than you would with an equivalent laptop or mini PC — just don't expect blazing performance.

The C40 keeps things simple with a glossy black front, thick bezels around the sides and a plastic mesh grille covering the speaker on the PC's chin. The Y-shaped base provides stable footing and tilt adjustments, but if you're looking to raise the display, you'll have to reach for a nearby hardcover book, because there's no height adjustment.

The power button sits on the right side, below a mode switch button that lets you change the input to whatever you have plugged into the HDMI-in port (such as a video game console or media-streaming box). There's also a vertically mounted pop-out DVD-RW drive above the buttons for those still clinging to disc-based media.

Lenovo provides two connectivity hubs on the C40 for your convenience. In back, the three USB 2.0 ports, power jack, and HDMI-in and HDMI-out ports are great for connecting things you don't need to reach on a regular basis. On the left, the two USB 3.0 ports, mic and headphone jacks, and 6-in-1 card reader provide a handy place to plug in more frequently used tools like a thumb drive or game pad.

The HDMI-in port allows you to connect things like a streaming-media box or a video game console, so you can use the C40 like a TV when you're not computing. This is a great feature that allows the C40 to pull double duty when set up in a bedroom or kitchen.

The peripherals packed in with the C40 aren't great, but they will get the job done until you can go out and get something a little better. The keyboard is a budget, rubber-domed affair with 2.94 millimeters of key travel, mushy action and a standard 60-gram actuation weight (the amount of force need to push the keys down). The scallop-shaped keys are easy to press, and resulted in me hitting 79 words per minute on my first run-through 10fastfingers.com's typing test, right in my typical 75-80 wpm average.

The simple, two-button mouse packs an infrared laser on bottom for tracking. Clicking felt a tiny bit stiff, but otherwise, this peripheral did not distinguish itself from the horde of throwaway mice I see on a regular basis.

With the C40's lack of height adjustment, I had an easier time lowering my seat than tilting the screen in order to get my head in the frame. Once positioned, the 720p webcam took a grainy shot with rainbow speckling and reduced my hair to a single dark mass.

The C40's 21.5-inch, 1920 x 1080 touch screen generally impressed, despite brightness that's a little on the low side and a display that's slightly more reflective than normal. When I watched the trailer for Southpaw, I loved the sparkle of the fight-night lights and the bold reds and blues of the ring. I just wish the screen were brighter so that colors would pop just a bit more.

The C40's stereo speakers put out more than enough volume to fill our spacious testing lab, but their audio fidelity was a little lacking. When I listened to Jamie xx's "Loud Places," the normally deep bass sounded hollow, while vocals took on an overly breathy quality. Highs were a bit better, and mids sounded the best, as demonstrated by the rich piano notes.

AMD's budget CPUs aren't very fast, and because the C40 uses one, it suffers. The combination of a 1.8-GHz quad core A6-6310 CPU, 8GB of RAM and a 1TB HDD results in performance that's about the same as our current tablet average. Watching movies at 720p was smooth, but at 1080p, I noticed some lag and screen tearing that made action scenes less pleasant to watch.

However, I noticed some lag during more-intense spell animations. But when I tried to play anything more graphically demanding, such as League of Legends, at the same settings, I had a hard time trying to keep frame rates above our 30 fps playability threshold.

Lenovo must think families enjoy plodding through bloatware, because there's quite a bit of it installed alongside Windows 8.1. There are useful apps such as Lenovo's Nitro Pro 9, a PDF-reader alternative to Adobe Acrobat, and Power 2 Go for burning CDs and DVDs. But then there's junk like Fruits, which is a children's matching game in need of a little more time on the vine. There's even an app that's literally called Collage of Waste Materials, which is a half-baked learning app that simply pairs a handful of nature terms with artsy composite pictures.

Lenovo also includes the Maxthon Cloud Browser, which helps you manage cloud storage accounts. This, however, is already made redundant by Lenovo's own superior REACHit app, which does the same thing with more functionality.

At a suggested $600, the Lenovo C40 is a device I would normally pass on, due to its less-than-stellar performance. However, if you can find it for under $500, Lenovo's package of an AMD-A6 CPU, 8GB of RAM and a 1TB HDD starts to make a lot of sense. The HDMI-in port also adds value and longevity, because you'll be able to use the screen as a stand-alone monitor long after the rest of the PC has become slow and decrepit. Those concerned with speed would be better off with the Intel Core i3-powered C560 Touch, but if you can find the C40 at a good price, it is an acceptable alternative.