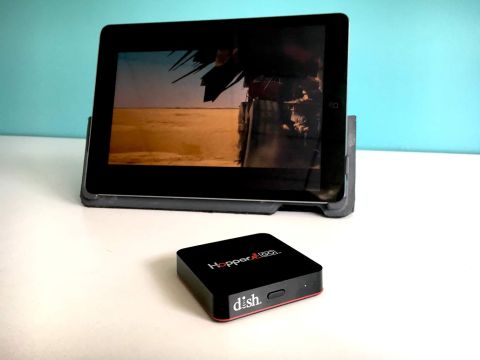 This small device lets you take your Dish DVR recordings wherever you go, but it’s not as versatile as other wireless hard drives.

When the movie options on airplanes aren't always the best, and you can't stream Netflix, how are you going to keep yourself entertained? The $99 HopperGO is DishTV's inexpensive answer. This small box can hold up to 100 hours of your DVR recordings, which you can carry with you on a cross-country flight or drive. But unless you've got a ton of saved movies, this isn't the device for you just yet.

The HopperGO is a small black box, not much larger than a matchbox. On the front are two small LEDs that let you know if it's on, next to a power switch.

The back of the box has a micro USB and a full-size USB port; the former is used to charge the Go and transfer content to the device, while the latter is used to copy content off the Go.

After connecting the HopperGO to your Hopper (the device works with the Dish Hopper 2 and Hopper 3 DVRs), a message will appear on your TV as well as the Hopper Anywhere app indicating that it's plugged in.

When you transfer a recording to the HopperGO (or your iPad), it's removed from your DVR. Unfortunately, there's no way to transfer that file back to your DVR, so if you want to watch it on your TV again, you'll have to re-record it.

Editor's note (5/27): According to Dish, not all content that's transferred to the HopperGO will be removed from your DVR; it all depends on the rights and permissions granted to the content being moved.

To watch videos stored on the HopperGO, you must first connect your tablet or smartphone (Android, iOS, and Kindle) to the GO's built-in Wi-Fi network. Unfortunately, the device doesn't have pass-through Wi-Fi, so while your mobile device is connected to the GO, you won't be connected to the Internet. Seagate has included that feature in its wireless hard drives for years.

You can stream videos to up to five devices simultaneously, but you need to have installed the Dish Anywhere app on those devices and be logged into it. This could be useful if you have multiple tablets and want to keep your kids entertained on a long car ride.

The Dish Anywhere app also lets you transfer movies directly to your iPad, but then you won't be able to watch the movies on other devices, such as your phone or laptop.

MORE: Buying a TV? Here Are 11 Things You Should Know

You can also transfer non-DVR content to the HopperGO, such as other movie and music files.

The HopperGO has 64GB of onboard storage, which Dish says is enough for 100 hours of recordings. To see how much storage has been used, press the Settings icon in the lower right corner of the Dish Anywhere app and select "HopperGO" from the left-hand menu.

Copying an HD version of Mad Max: Fury Road (125 minutes) as well as The Imitation Game to the HopperGO took about 2 to 3 minutes each. However, when I tried copying Whiplash (from Starz) and Stagecoach (from Turner Classic Movies), the GO got stuck on "Preparing."

There are limits to what you can watch on the HopperGO. You can't transfer pay-per-view content or movies or shows you've rented.

MORE: How to Buy a Streaming Media Player

With my iPad connected to my Wi-Fi network, I could see through the Dish Anywhere app what recordings had been transferred to the HopperGO. However, in order to watch those recordings, I had to connect my iPad to the HopperGO's Wi-Fi signal.

Streaming movies from the HopperGO to my iPad was quick; it took about 30 seconds to start buffering, but after that, the movies came through clearly, without any lag or artifacts. I was also able to skip forward and back through movies without much lag.

Dish says that the GO's battery will last up to 4 hours when streaming movies to two devices. You can also stream movies while the GO is recharging, which is particularly useful when you're on a long flight.

From a full charge, I streamed a movie to a single iPad, and after 3 hours, the HopperGO was down to 56 percent battery life. On the Dish Anywhere app, a status bar in the upper right corner shows how much juice is left on the HopperGO, though.

Who says you can't take it with you? The $99 HopperGO is an inexpensive way to watch your DVR recordings when you can't connect to a network, without using up all the storage on your iPad or other tablet. Still, there are some kinks to be worked out: There's no way to tell how much battery life or storage is left on the GO itself, and once you've transferred something from your DVR, there's no way to transfer it back.

If you have a lot of content other than Dish DVR recordings, the Seagate Wireless Mobile Storage is a better option. While you can't load DVR recordings to it, this $89 device has 500GB of storage (for any type of content, such as movies, photos and documents), can beam content to Chromecast, an LG Smart TV or a Roku player, in addition to your tablet, and has pass-through Wi-Fi.

Dish deserves credit for introducing a different way to take your DVR recordings on the road, but the HopperGO needs some refinement.