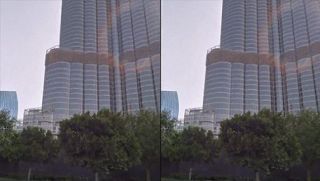 Google Maps' first-person Street View is a natural fit for virtual reality, and the two have finally come together for anyone with an Android phone and some cardboard. The Android version of Google's popular navigation app now has a VR mode, allowing anyone with a Google Cardboard viewer to virtually walk around select cities all over the world.

To activate Google Maps' VR mode, you simply open Street View and double-tap the refresh icon at the bottom right of the screen. This will split the display in two, so you'll need to drop your phone into one of several Google Cardboard viewers to experience the virtual reality effect.

You can make your own Google Cardboard using velcro, rubber bands, magnets, lenses and cardboard, or buy one of several pre-made goggles such as the $22 Dodo Case and the $20 I Am Cardboard.

Google hasn't specified which destinations support VR mode (the company's blog uses Dubai's Burj Khalifa as an example), nor has it mentioned whether the feature will come the iOS version of Maps. The feature seems like a natural fit for Samsung's just-released Gear VR, a $200 virtual reality headset that uses the Galaxy Note 4 as its display.

If you can't afford a $200 VR headset that requires a $300 phone, however, it's good to know that some cheap cardboard and an Android phone is all you need to virtually escape to another city for a bit.