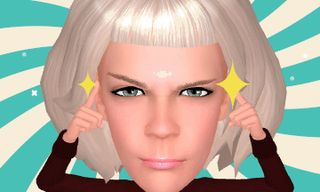 Apple's iPhone X created a new way to communicate: animated emoji that mimic your facial expressions. Samsung's newly unveiled Galaxy S9 doesn't have a depth-sensing camera like Apple's, but that didn't stop the company from introducing animated emoji of its own.

Apple's animated pig, robot and poop emoji can rest easy for now, though. Based on our hands-on time with the Galaxy S9, the new AR Emoji feature needs some work.

On the bright side, Samsung's animated emoji are more lifelike than Apple's. Instead of becoming an expressive talking unicorn, your face and voice are used to animate what is supposed to look like a three-dimensional cartoon version of yourself.

In an interesting decision, Samsung didn't base its augmented-reality feature on Google's ARCore developer tools, though the Galaxy S9 does support Google's AR software.

To create the emoji, the device uses a two-dimensional still photo of you. It's essentially a passport photo in which you look straight at the camera and give a slight smile. You can take that photo using either the front- or rear-facing lenses. The S9 then analyzes 100 points in that 2D photo to create a 3D model of you.

The S9 then automatically creates 18 sticker versions of your face as animated GIFs. You can record videos of you talking as this cartoon version of yourself, and the avatar will mimic your facial expressions. You can easily share these stickers and videos in messaging apps or on social networks.

In their quest to look more like humans and less like animals — which is a big difference from the iPhone X's Animoji — the S9's animated emoji end up looking, well, bizarre. In our hands-on time with the S9, none of the emoji we created looked exactly like us. Although you can change your avatar's hairstyle, hair color and clothing, the facial features all look pretty similar.

The feature also prompts you to select male or female after taking the image, to offer hairstyles and outfit choices befitting either gender. That's problematic. I wish the S9 could create an emoji that looked like me, with my hair and shirt color, without having to select from a slate of hair and clothing options that aren't me at all. Long, red hair and a polka-dot shirt weren't even options, so I couldn't customize my AR emoji like I can personalize Bitmoji on platforms such as Snapchat and Viber.

The GIFs that the S9 creates using your emoji are pretty cute. But the videos you can record as a talking emoji version of yourself are kind of disturbing. I recorded a video of my colleague Mark speaking and found myself doubled over laughing at his emoji's expressions (and not in a good way). A furrowed forehead, raised eyebrow and even a smile all seemed off in the cartoon version of Mark.

Apple's Animoji make people laugh, too, but that's because seeing your facial expressions and voice coming from familiar, popular emoji you already use daily are hilarious, as anyone who's ever seen an animated poop emoji will tell you. The iPhone X camera's depth sensor can really capture the expressiveness of your face, which makes it fun to sing karaoke as an emoji. I can imagine sending videos of my S9 character singing, and watching my friends react in horror.

If you're going to use the Galaxy S9's AR emoji, I recommend sticking with the animated GIF stickers and forgoing the videos unless you want to terrify your loved ones as a strange cartoon version of yourself. Which you might want to do.

We expect Samsung to step up its game on the emoji front, but the company will likely have to improve its camera hardware to create realistic three-dimensional characters that are delightful to share.