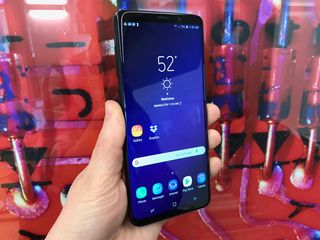 From a Super Slow-Mo video recording mode that's smart enough to sense motion to very weird augmented- reality emoji, Samsung designed its new phones to delight. But how well do they perform?

I've been testing the Galaxy S9+ for the better part of a week, and so far there's a lot I like. But there's also some misses on Samsung's part. Updated March 1 with additional hands-on impressions and testing notes.

Available for pre-order March 2 and on shelves March 16, the Galaxy S9 and S9+ also make Bixby more useful, take stereo sound to the next level and pack a faster Snapdragon 845 processor. Here's my take so far.

The Galaxy S9 and S9+ look like dead ringers for the Galaxy S8 and S8+, and I’m not complaining. Samsung says it made the bezels on the Infinity Display a bit narrower on the top and bottom while making the iris scanner above the screen more subtle. The quad HD OLED displays are also brighter than before, but Samsung didn't specify by how much.

Available in three colors — Midnight Black, Coral Blue and Lilac Purple — all three of the hues for the S9 and S9+ look fetching, but the purple pops the most. Despite reports that the phones would have a more matte finish, I didn't notice much of a difference, and you’ll definitely need to wipe these phones down periodically to avoid fingerprint smudges.

Speaking of which, Samsung has fixed the worst part about the S8 and S8+ by moving the fingerprint sensor beneath the rear camera, as opposed to the side. This way, there's much less risk of smudging the lens than there was with last year's models.

Although Samsung doesn't have a direct answer to Apple's Face ID in the iPhone X, it has made unlocking its phones easier with a new Intelligent Scan feature. Intelligent Scan combines iris scanning with facial recognition to make sure you can log in, without having to switch between methods. Basically, if iris scanning doesn't work — and it can be a challenge in bright light — face recognition will kick in. We'll have to test this out thoroughly to see how well (and how fast) it works.

If there's one area the Galaxy S8 trailed the iPhone X and the Google Pixel 2, it's photo quality. And this is where Samsung's new Super Speed Dual Pixel camera definitely ups the ante. Although it packs the same 12-megapixel resolution as the Galaxy S8, the camera now offers a variable aperture that's mechanical, capable of switching on the fly from f/1.5 to f/2.4.

The Galaxy S9+ will be the phone to get if you want a 2x optical zoom, and to leverage features like Live Focus for taking portraits, as only the S9+ offers a second telephoto lens.

MORE: Galaxy S9 vs iPhone X: What Should You Get?

Similar to the human eye, Samsung says the main camera on both the S9 and the S9+ can let in up to 28 percent more light overall, compared with the Galaxy S8. We saw fairly good results when shooting some low-light photos at The Campbell bar, as the bartender and glass wall was clearly visible, even though some bottles got blown out.

At an indoor market, the Galaxy S9 did an admirable job delivering detailed photos of plums, and the persimmons were nice and shiny. The price tag in the foreground looks a bit fuzzy, but overall it's a solid photo.

On the software front, the Galaxy S9 offers multiframe noise reduction, which Samsung claims reduces noise by up to 30 percent compared with the Galaxy S8. This is partly because the camera sensor now has dedicated memory (DRAM) for processing images.

The literal show-stopping feature of the S9's camera is Super Slow-Mo. Once you enter this mode in the camera, the Galaxy S9 and S9+ are smart enough to automatically sense motion and slow things all the way to 960 frames per second (fps) at 720p resolution. This was especially cool when recording confetti being thrown and  a tiny pop-out streamer being set off. (Sony's new Xperia XZ2 shoots at the same rate and even higher 1080p resolution, but it doesn't have any AI features built in.)

The slow-mo part of the video lasts 0.2 seconds, and the whole clip is 6 seconds, making it easy to share. In fact, you can easily turn a slow-mo clip into your phone's lock-screen wallpaper. Based on my early tests, the slow-mo video mode works fairly well, but you need to make sure you hold the phone steady. On one occasion I got an error message that the camera failed, even though the slow-mo video got captured.

The real fun starts when you check out the multiple effects, including Loop, Swing and (my favorite) Reverse. This modes are built for sharing and are guaranteed to compel your social media contacts to ask you which phone you used. The slow-mo video looked fairly smooth and sharp, but it can be tricky capturing the action at the right moment, even in Auto mode. Fortunately, you can switch to Manual mode if you know the exact moment you want to fire up slow-mo.

If you feel constrained by the iPhone X's limited selection of animal avatars for its Animoji, you’ll like the freedom the Galaxy S9's AR Emoji provides. That's because you can turn yourself into an animated 3D emoji. The problem is that the AR Emoji look a little wonky in practice.

Creating an AR Emoji is pretty simple using the S9's front camera. You just use the front-facing 8-MP shooter to analyze 100 points on your face, after which you'll see a Nintendo Mii-like avatar pop up on the phone. From there, you can tweak anything from the skin tone and hair style to the clothes, and the Galaxy S9 will automatically create 18 AR emoji stickers you can share with others right from the keyboard in various apps, including messaging.

Similar to the iPhone X, you can also create videos with sound using your AR Emoji, complete with facial expressions. Unfortunately, the Galaxy S9's hardware doesn't seem nearly as sophisticated as the TrueDepth sensor on the iPhone X, as my eyebrow raising, smiles and other movements didn’t look as realistic as I hoped. The AR Emoji itself also didn't look that much like me; it's more like a caricature that's not quite right.

Bixby grows up (and gets makeup)

Samsung still has no plans to put its Bixby assistant up against Google Assistant, Alexa or Siri, but it is finding ways to make its software more practical. Using the camera app, for instance, you can push a button to fire up Bixby Vision and translate signs on the fly. Even more impressive, the translated words appear directly on whatever sign or menu you're pointing the S9's camera at.

The Bixby feature that gets more oohs and ahs is virtual makeup. You can try out a new lipstick shade in real time or false eyelashes to see how they look on your face, then order that makeup directly from a partner like Sephora. My colleague Caitlin tried out the new Bixby lens and was impressed by the camera's ability to map her features and apply false lashes and coral lipstick, just as a professional makeup artist would. The lashes in particular made her  want to tap to buy immediately. The new feature could prove to be more gimmicky than useful, but Sephora has a devoted customer base that might be tempted by the S9's beauty tie-in.

Other new Bixby Vision talents include place recognition and estimating calories of food, although Google’s Lens feature in the Pixel 2 seems more sophisticated regarding its ability to automatically display star ratings for businesses.

The Galaxy S8 and S8+ sounded a bit flat, but the Galaxy S9 and S9+ fix that with stereo speakers that pump out 1.4 times more volume. In a quick demo, it was immediately clear that the newer phones produce fuller audio. As a bonus, these handsets support Dolby Atmos, which tricks your brain into thinking that you're hearing sounds in specific locations around you. For instance, at one point it felt like a helicopter was zooming over my head.

You'll be able to save when the Galaxy S9 starts preorders on March 2. Samsung says eligible phones will qualify for a $350 trade-in rebate, though it didn't specify which models are eligible.

Dex Pad: A step closer to replacing your PC

We liked the concept of the original DeX, but the execution was a little clunky.

The new Dex Pad accessory (price TBD) makes the prospect of turning your phone into a mini PC a little more appealing. And it works with the Galaxy S9 and S9+ as well as the S8, S8+ and Note 8.

For one, the Dex Pad now supports up to 2K resolution on a larger monitor, compared with 1080p on the DeX. And the lay-flat design of the Dex Pad makes it easy to use your Galaxy S9 as a touchpad when docked, although you can still connect a full-size keyboard and mouse. As for apps, Samsung says it has up to 40 partners optimizing their Android apps for this accessory, including the Final Fantasy XV Pocket Edition game.

The main differences between the Galaxy S9 and S9+ are a bigger display, more RAM and more cameras. The S9 has a 5.8-inch screen, while the S9+ steps that up to 6.2 inches. The S9+ also offers more RAM at 6GB, versus 4GB for the S9. But the biggest upgrade for the S9+ is its dual cameras, which enables 2x optical zoom and Live Focus. Last, but not least, the S9+ has a beefier battery (3,500 mAh versus 3,000 mAh, the same sizes as the Galaxy S8+ and S8, respectively).

The price difference between the phones should be around $100, but that's not confirmed.

The Galaxy S8 and Galaxy S8+ were the best all-around phones for several months last year, until the Pixel 2 stole Samsung's camera thunder and the iPhone X pulled ahead in t display quality and its Face ID technology. The Galaxy S9 and S9+ look like they have the potential to take the camera mantle back, and some of the new augmented-reality capabilities are impressive. But the lack of hardware advancement for the front camera shows in the not-fully-baked AR Emoji.

If you own a Galaxy S7 or older Android phone, the Galaxy S9 and S9+ should satisfy. But we'll have to perform in-depth testing on the camera, new Snapdragon 845 processor and battery life before we can say how Samsung's new hot shots stack up to other flagships.