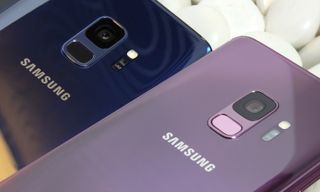 With the Galaxy S9 and Galaxy S9+, Samsung says it's setting out to reimagine the camera. To do that, it's made a number of improvements across the board, from boosting slow-motion video, to ensuring better low-light performance via cutting-edge hardware and software improvements.

We've had a chance to grab some hands-on time with the Galaxy S9 and S9+ at their unveiling in Barcelona. Here are the five biggest changes Samsung is bringing to the cameras inside its newest flagships.

Any photographer will tell you that aperture, shutter speed and ISO are the three basic elements that will make or break your photos. However, smartphones are quite limited in what they can achieve, given their compact packaging, small lenses and even tinier image sensors. So they typically miss out on features that conventional cameras benefit from.

Aperture adjustability is one of the biggest factors that determines photo quality. The aperture is the opening of the lens, and that opening determines the amount of light that hits the image sensor beneath. You want to let as much light in as possible in dim situations, but an aperture that is too large in well-lit conditions — like a really sunny day, for example — will fry your exposure, cloaking the most intricate details in total whiteness, while severely limiting the image's depth of field.

Both the Galaxy S9 and S9+ feature mechanically variable apertures on their main 12-megapixel lenses that you can switch between, either automatically or manually, depending on the situation. The system can alternate between f/1.5, a wide-aperture ideal for getting the brightest images in low-light scenarios; and f/2.4, a comparatively smaller aperture that grants you increased fidelity when light is plentiful and you actually want to limit how much of it passes through the lens.

The fact that they alternate is key: Unlike standalone cameras, the S9's isn't fully adjustable, meaning you can't select f-stops between f/1.5 and f/2.4. However, the addition of these two options already doubles what every other phone can offer, and these features will help the S9 deliver better nighttime and indoor shots, without sacrificing quality in daylight.

Most smartphones are limited to recording slow-motion video at around 240 frames per second. And while that's plenty slow, it's nothing compared to what the Galaxy S9 can offer.

The S9 is capable of capturing video at 960 fps, at a resolution of 720p. The only other phones out there that rival it are Sony's Xperia XZ Premium and XZ1 handsets, though they lack a critical feature that Samsung has implemented to make recording slow-motion video less challenging: artificial intelligence.

Samsung's new flagships offer a mode that uses AI to determine when activity in a frame begins. You simply start recording, and the second an event or action occurs in the shot, the phone is smart enough to automatically apply slow-motion recording when the time is right. For example, we set off a mini confetti cannon, and the S9 knew to slow things down the second it fired.

The slowed-down part of the video is 0.2 seconds in regular time, but plays back in 6 seconds when recorded at 960 fps. The AI mode means you needn't worry about missing the moment because you weren't quick enough to press the record button. However, if you'd like more control, a more conventional manual-recording mode is also available on the S9 and S9+.

Dual Cameras and Live Focus on the S9+

Both features will now be available to S9+ users as well, putting that phone on an equal footing with competitors like the iPhone 8 Plus and iPhone X, Huawei Mate 10 Pro, LG V30 and Google Pixel 2 and Pixel 2 XL. While the S9 and S9+ will each employ the same 12-megapixel, variable-aperture main sensor, only the larger model will come equipped with a 12-MP, f/2.4 telephoto lens.

Software has become hugely important in determining photo quality in smartphones, and Samsung has been hard at work fine-tuning its photo-processing algorithms and image-sensor layout to deliver better and faster results.

The best example of this is multiframe noise reduction, a system that captures the same shot multiple times — almost like HDR mode — and then consolidates them to create a cleaner exposure that's free of noise. Samsung claims its technology reduces noise by 30 percent, thanks in part to S9’s new stacked image-sensor design, which embeds a layer of dedicated memory right on the chip for quicker processing.

The benefits of multiframe noise reduction are most evident when shooting in low-light scenarios, where cameras typically have to jack up the ISO to get a shot that's barely bright enough. Combined with its lower f/1.5 aperture, the Galaxy S9 should be able to deliver photos that are much less grainy than its predecessors' images.

Thanks to handsets like the iPhone X, animated emoji have leapt off text fields and into three dimensions. The Galaxy S9 wants to take that evolution a step further with AR Emoji, Samsung's name for its personalized characters, which track your facial movements and can be used to deliver static or animated messages.

AR Emoji are different from Apple's Animoji, in that they're you, not animals (or, God help us, animated poop). The Galaxy S9 analyzes your face and then creates a cartoon version of you that almost resembles Snapchat's Bitmoji — only in 3D. From there, you can customize a range of details, from skin tone to hair and clothes.

Our first experience using AR Emoji wasn't the smoothest. The front-facing camera tended to produce digital versions of ourselves that didn't look quite right. But once you've settled on a look that satisfies you, the S9 automatically goes ahead and creates 18 stickers with different emotions.

Because AR Emojis is based on face tracking, you can record yourself using different expressions, and your AR Emoji will mimic those movements. You can then share those animations across messaging apps like a video.

Based on our hands-on time, the whole system could benefit from a little more tuning for more accurate caricatures and tracking. But overall, AR Emojis offer a level of personal expression we haven't seen from smartphones before.

It's no secret that the Galaxy S8 and Galaxy S8+ weren't particularly ambitious in the camera department. Samsung's last-gen flagships merely carried over much of the technology from the Galaxy S7 and Galaxy S7 Edge. The S8 generations did a lot to advance design and displays in smartphones, but not much for photography.

With the S9 and S9+, that's changing. Samsung is betting big on cameras with the new phones. Given the progress the company has made over the last two years, we're inclined to think the Galaxy S9 will do more than make for a worthy adversary against the likes of the iPhone X and Pixel 2. Breakthrough features like its mechanically adjustable aperture are only going to become more commonplace as the industry catches on; for right now though, the Galaxy S9 is leading the charge.