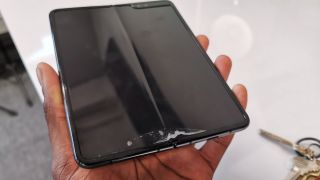 Update April 18 5:22 am ET: We have included Samsung's full statement below.

One of the big questions about the Galaxy Fold is how well Samsung's new foldable phone would hold up to steady use and repeated folding and unfolding. We're starting to get an answer to that question, though it's not going to be one Samsung will be happy to hear.

A quartet of reviewers who got early access to the Galaxy Fold are reporting issues with the device, from a bulging display to portions of the folded-out screen giving up the ghost.

While reports are limited to just these Folds and it's unclear how many devices are out there in use right now, it's a black eye for Samsung, especially considering the lofty $1,980 it's charging for the Galaxy Fold. And it's especially disappointing since all three reviewers with broken screens only got their hands on the folding phone a few days ago.

Mark Gurman of Bloomberg and tech YouTuber Marques Brownlee also have Folds with broken screens, though the problems seem to result from some confusion over a protective layer that covers the Fold's screen.

"There's a layer that appears to be a screen protector on the Galaxy Fold's display," Brownleee tweeted. " It's NOT a screen protector. Do NOT remove it." After peeling back a bit of that layer, Brownlee says his screen blacked out. Gurman reported a similar issue.

MORE: 7 Most Surprising Things About the Galaxy Fold (Good and Bad)

Because the documentation for the Galaxy Fold contains a warning against removing the protective layer — it's in small print, Android Police says — that could account for two of the cases involving screen failures. Gurman tweeted that the review unit he received didn't have the warning about removing the layer, and it wasn't communicated to him until a day after he received his Fold.

Samsung's statement about the reported screen failures noted the importance of the protective layer.

But CNBC says it didn't remove the protective layer on its Galaxy Fold review unit, so that doesn't necessarily explain the other problems tech writers are running into.

Take Dieter Bohn of The Verge, who also reported an issue with his Galaxy Fold, with a small bulge appearing on the crease of the phone where it folds in two. "It’s just enough to slightly distort the screen, and I can feel it under my finger," he writes at The Verge. "There’s something pressing up against the screen at the hinge, right there in the crease."

Bohn thinks the problem is either a piece of debris that either found its way underneath the screen or a part of the Fold's hinge that broke off. Either way, it's not a very promising start for the Fold, and this issue also doesn't seem to have anything to do with the display's protective layer.

On Wednesday night, Samsung responded, saying that it's looking into the issue. "A limited number of early Galaxy Fold samples were provided to media for review. We have received a few reports regarding the main display on the samples provided," a Samsung spokesperson told us in a statement. "We will thoroughly inspect these units in person to determine the cause of the matter."

"Separately, a few reviewers reported having removed the top layer of the display causing damage to the screen. The main display on the Galaxy Fold features a top protective layer, which is part of the display structure designed to protect the screen from unintended scratches. Removing the protective layer or adding adhesives to the main display may cause damage. We will ensure this information is clearly delivered to our customers.”

How the Galaxy Fold design works

The Fold features a 20-part, dual-axis hinge that's designed to open and close seamlessly with just a little bit of force. Samsung told us that the hinge is supposed to withstand 200,000 open and shuts, so this shouldn't be a part that breaks down after just a day or so of use.

For what it's worth, Tom's Guide has also gotten access to a Galaxy Fold review unit, and Mark Spoonauer's been putting it through its paces since Monday for our Galaxy Fold hands-on review. We haven't seen any issues with the display during our testing.

Samsung is taking pre-orders for the Galaxy Fold right now. The $1,980 phone ships on April 26, and it will take some time for Samsung to investigate and release its findings.

At least for now, it looks like early adopters should wait until there's more clarity around what's causing these issues before they buy.