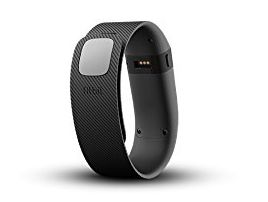 The Fitbit Charge is a comfortable and long-lasting fitness tracker that adds caller ID to the mix, but we'd prefer more notifications.

You know you're doing something right when one of your flagship products is recalled and you still command nearly 70 percent market share. That's how big Fitbit is in the fitness tracker world, but it's been more than a year since the company released a new product. The $129 Fitbit Charge takes everything that was popular about the Fitbit Force and adds a Caller ID feature to complement its activity, steps and sleep tracking. But has Fitbit done enough to stay ahead of the loads of other wearables on the market?

The Fitbit Charge looks nearly identical to its predecessor, the Fitbit Force. It's a subdued design, with a small, rectangular LCD display and a black, rubberlike band that has a diagonal pattern running along it. Like previous Fitbits, the top of the Charge is about half an inch thick nearest the display, and tapers slightly.

My Charge came in black, but Fitbit offers the band in red as well as two shades of blue. The Charge should fit in with whatever you're wearing.

A button on the left side of the band lets you cycle through the Charge's screens: Time, Steps, Distance, Calories and Stairs. If you have a goal set for a particular metric, a small, white band will extend across the bottom of the screen to show how close you are to meeting that day's goal. I wish there were a way to have the time stay on constantly; the screen remains off unless you press the button or tap the display twice.

It looks the same, but the biggest improvement to the Fitbit's band is its clasp. Although it's still not as easy to close as a traditional watchband, I no longer feel as if I'm going to amputate my wrist when trying to connect its two sides. Although the band is adjustable, the Charge comes in three sizes (small, medium and large) to better accommodate different wrist sizes.

The Charge is water-resistant to about 33 feet, so although you can safely take it in the shower (which I did), it's probably best not to go swimming with it.

The newest feature being added to activity trackers is the ability to receive smartphone notifications. While not as comprehensive as those found on smartwatches, it does add some more functionality to what was a single-purpose device. However, the Charge's notifications are limited to caller ID — even other fitness trackers have more notifications than that.

When a call comes in, the caller's number scrolls across the face of the Charge. If the number is in your contacts, then the person's name appears. Unfortunately, the Charge vibrates only once, so if you don't feel it, the only way to know if your phone is ringing is if you happen to be looking at the Charge at that moment.

Like the Basis Peak, you can see who's calling, but you can't take any actions using the Charge; it would be great, for instance, you could press the Charge's button to let you silence the call.

Fitbit's mobile app is easy to use and presents the information you need right up front. But it's not the best.

At the top of the home screen is a thumbnail of the device you're connected to (in this case, the Charge) and a small icon showing its battery level. Below that are your stats for the day: Steps, Miles, Calories Burned, Floors Climbed, Active Minutes, and so on. Beneath each stat is its respective progress bar; select a stat, and the screen changes to show a chart of when you were active during the day, as well as historical data.

The information shown in Fitbit's app is functional, but it all feels sterile compared to Jawbone's app, which uses shading and bright, bold colors to make everything seem a lot livelier. This is most apparent in the food-logging section of both apps.

Entering food items is an extremely tedious process. While I like that Fitbit's app has comprehensive calorie listings from dozens of national chains, trying to search for a generic term, such as "pizza," turned up a list of more than 100 results. Similarly, a search for "turkey sandwich" gave such a wide range — from an 80-calorie Wawa sandwich to a 560-calorie gut buster at 7-Eleven — that you're left to guess the healthiness of your Thanksgiving leftovers.

Jawbone's app is a lot friendlier, in that it not only offers generic results for things such as pizza and turkey sandwich, but also has thumbnail pictures to go along with each, and suggests popular items, such as a cup of coffee, a bagel, and so forth. I also like that its app has a specific Restaurant tab (powered by Foursquare) that not only lets you search by specific restaurant chains, but also shows you ones closest to your location.

Like Jawbone, Fitbit lets you search for friends who also have a Fitbit device and challenge them to see who can walk the most in a day, for example. It's a good way to stay motivated.

I wore the Charge for several days, and throughout that time, I barely noticed it was on my wrist. The thinness of the band allowed my wrist to rest comfortably on a desk while I typed all day — something not even the Jawbone UP24, for all its svelteness, allows.

The Charge accurately tracked steps, distance traveled and stairs climbed — but alas, I got no credit for going down stairs. A 0.94-mile walk around New York City, as measured by MapMyRun, was recorded as 0.91 miles on the Charge.

Like the Jawbone UP24 and the Basis Peak, the Fitbit Charge can automatically enter and exit sleep mode, which is great because there's nothing harder to remember than having to press a button right before you go to sleep, and right after you wake up.

Also like its competition, the Charge has a vibrating alarm that will wake you gently in the morning. I found that it buzzed just enough to get me up, but not so much that I was shocked awake.

Fitbit says the Charge will last up to 10 days before needing to be recharged. After I wore the device for three days and two nights, the Charge was still at full capacity.

Like previous Fitbit devices, the Charge uses a proprietary USB cable that attaches to three metal contacts on the underside of the band.

The Fitbit Charge takes everything I liked about the Fitbit Force — activity, steps and sleep tracking — and adds caller ID to the mix. I didn't really find the newest feature all that useful, but it's a nice addition. The Fitbit Charge is thicker than, and costs as much as, the Jawbone UP24, but that device lacks a display and, of course, caller ID. I prefer Jawbone's app, but Fitbit's is more than functional.

If you're looking for an inexpensive activity tracker, the Fitbit Charge has a good blend of features for the price, but it feels like the middle child in Fitbit's lineup. For $30 less, the Fitbit One dongle offers many of the same features — minus caller ID and auto sleep detection — while $20 more will get you a heart-rate monitor in the upcoming Charge HR. You won't be disappointed with the Charge, but it's worth shopping around.