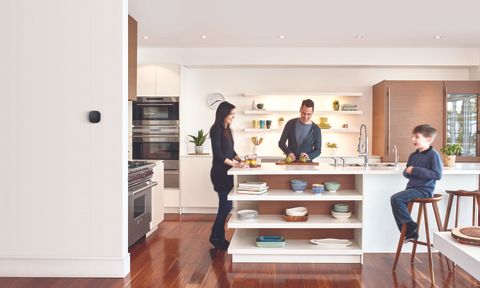 While it's the first smart thermostat with Alexa, the Ecobee4's most useful feature is its remote sensor, which helps ensure that every room in your house is at the right temperature.

Amazon's Alexa voice assistant has rapidly expanded its capabilities to work with a lot of smart home devices, but up until now, you needed to buy an Amazon Echo or an Echo Dot to enable those interactions.

No more. The Ecobee4 smart thermostat ($249) is the first such device to have Alexa built in — in addition to setting the temperature, you can now use the thermostat to order pizza, tell jokes, play music or anything else Alexa can do.

Otherwise, this smart thermostat has all of the same features as its predecessor, the Ecobee3, one of the best smart thermostats we've reviewed. But just because you can put Alexa in anything, does that mean you should?

Same discreet design. At first glance, the Ecobee4 is barely distinguishable from the Ecobee3. Its face is a rounded black square with a smartphone-sized touch screen in the middle. The biggest noticeable difference is a small blue LED bar along the top, which lights up when Alexa is activated. While the unit doesn't feel or look as premium as the Nest's elegant stainless-steel dial, the Ecobee4 is minimalist and unobtrusive.

The interface is largely the same, with the current temperature displayed prominently and a slider along the right to adjust the heat or cooling. A small microphone icon in the lower right lets you activate Alexa manually.

Easy installation.Setting up and installing the Ecobee4 in my apartment took no more than 15 minutes, although, admittedly, this is about the 10th thermostat I've installed. Still, attaching the Ecobee4 to the wall and then going through the various steps, both on the thermostat and on Ecobee's app (Android and iOS), was a fairly simple process.

Smart sensors. I liked the Ecobee3 because you can pair it with remote sensors to ensure that every room in your house is cooled or heated to the proper temperature. The Ecobee4 also works with remote sensors — one is included — and it can be paired with as many as 32. (A pack of two sensors sells for $79.) Plus, both the Ecobee4 and the remote sensors can detect whether or not you're home, and automatically switch from Home to Away mode.

Alexa works well. The Ecobee4's far-field microphones were just as adept at picking up and understanding my voice as the Echo Dot's. In fact, it might be a bit too good — since my 650-square-foot, one-bedroom apartment is on the cozy side, I found that both the Ecobee4 and the Echo Dot (which was in another room) would respond simultaneously to my questions, depending on where I was standing when I said "Alexa." So it's a good thing that you can disable the Ecobee4's always-listening mode, just as you can with the Echo or Echo Dot.

Superior smart home integration. In addition to Alexa, the Ecobee4 works with a wide range of smart home devices and systems, including Apple HomeKit, IFTTT, Wink and Samsung SmartThings.

Weak speaker. The small speaker in the back of the Ecobee4 is functional, but it's just as weak as the speaker on the Echo Dot. It's fine for asking short questions of Alexa, but you wouldn't want to use it to play music. And, unlike the Dot, you can't pair the Ecobee4 with a Bluetooth speaker. It wouldn't be good as your primary Alexa device.

Limited geofencing. Like the Honeywell Lyric, the Ecobee4's app has geofencing, so it can sense when you're within a certain radius of your house and turn the thermostat on or off automatically. That way, when you arrive home, your abode is at the temperature you want. However, this feature is only available for Android users; iOS users will have to use HomeKit or IFTTT to get the same functionality.

Do you really need — or want — Alexa everywhere?

Think about where your current thermostat is located. Chances are, it's in a hallway or some other place where you don't spend a lot of time. Unless you plan on making a lot of drive-by Alexa requests, having Alexa on the thermostat is not all that useful. In fact, after making sure it worked, I found myself rarely using the Ecobee4's Alexa because I don't hang out in my hallway. The Echo Dots I had in my bedroom and living room got far more use.

The Ecobee4 makes the most sense for those who want to have Alexa coverage throughout their homes. However, if your thermostat is located in a room that already has an Echo or an Echo Dot, adding an Ecobee4 becomes redundant, and it's not as functional, audiowise, as either of Amazon's speakers.

The Ecobee4 costs $249, the same price as the Ecobee3 when it first launched, so you won't be paying a premium for Alexa. The Ecobee3, which is being phased out, now costs $199, but will still be supported with updates and customer service. If you don't care for Alexa, or don't need it, then the Ecobee3 is the better buy for now. But if you want Amazon's assistant wherever you go, then the Ecobee4 is the smart thermostat to get.