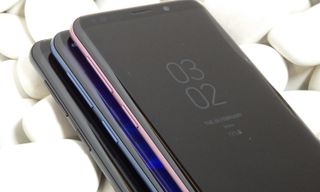 If you want a Galaxy smartphone — but don't want to pay a premium price — as we state in our Galaxy S9 and S9+ review, these phones are your best bets. Sure, they're almost two years old and the the Galaxy S11 is on the way, but they still provide plenty of power for daily use.

Samsung sells the unlocked Galaxy S9 from $599.99, whereas the unlocked Galaxy S9 Plus starts at $699.99. However, we've seen retailers regularly take as much as $120 off each model. Sure, there are some performance differences between the S9 and S10, but users who don't demand cutting edge speed should be fine with either S9 smartphone.

The Galaxy S9 is one of best Android phones you can get. It sports a stunning 5.8-inch Super AMOLED LCD (2960 x 1440) that makes watching movies on the S9 a completely immersive experience. In terms of performance, the Galaxy S9 packs an older Snapdragon 845 CPU, which puts it just behind the iPhone X. However, you still get an excellent low-light camera, killer display, and a long-lasting battery in the palm of your hand.

Calls:
to the US & Canada
Texts:
+ Unlimited Wi-Fi Texting
Data:
Users of more than 23GB in a month will be slowed to 2G speeds
View Deal
at
TextNow
Boost Mobile US
No contract
Samsung Galaxy S9
$549.99
upfront
$80
/mth
Unlimited mins
Unlimitedtexts
Unlimiteddata

Calls:
to the US, Canada, Mexico & China
Data:
Unlimited 2G after 25GB of 4G LTE data use
View Deal
at
Tello
We check over 130 million products every day for the best prices
View All Deals
powered by

The Galaxy S9 Plus takes everything we love about the S9 and supersizes it starting with the larger 6.2-inch Super AMOLED LCD (2960 x 1440) display.  The Snapdragon 845 processor inside the Galaxy S9 and S9 Plus provides ample power, but it's not enough to catch the A11 Bionic chip inside the iPhone X. On our real-world video editing test, it took the S9 Plus 2 minutes and 32 seconds to transcode a 4K video, compared with just 42 seconds for the iPhone X. The Galaxy S9 took longer, at 3:29, likely because it has less RAM (4GB, versus 6GB for the S9 Plus).

Calls:
+ International Connect PLUS
Texts:
Domestic and international text
Data:
Deprioritization applies during congestion
View Deal
at
Boost Mobile
We check over 130 million products every day for the best prices
View All Deals
powered by