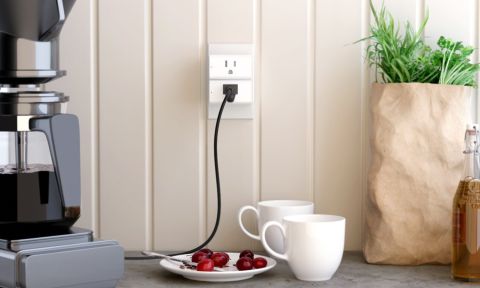 This small, inexpensive plug lets you control lights and other "dumb" appliances from your phone.

Smart plugs generally cost less than $30 and can be used to make anything plugged into them "smart," so you can control lamps, coffee makers, fans and more, right from your smartphone. However, with so many cheap smart plugs on Amazon, it's tough to know when you're actually getting a quality device. Aukey's Wi-Fi plugs, which come in a pack of two for $25, would seem a real bargain to a cost-conscious shopper. Guess what? They are, which is why it's one of the best smart plugs around.

White and rectangular, the Aukey plug has a power button on one of its long ends. A tiny LED on its face clues you in to the plug's status.

Aukey also offers a two-year warranty on its plugs.

Like most smart home products, the Aukey Home app is downloadable to my iPhone (it's also available for Android). Pay attention in the app store, however, because there are a number of Aukey apps, including one called Aukey Smart Plug+.

Next, I registered for an account. Unlike most other plugs, which ask for an email address, Aukey's app asks for your phone number, to which it sends a confirmation code. You then enter it, along with your password, to create an account.

The home screen of the app lists the three types of Aukey devices you can connect to: lighting, wall switches and electrical outlets. At the top of the screen is a status message saying that the app is scanning for devices to connect: Don't bother with it. I tried a few times to scan for the plug, to no avail. I then selected Electrical Outlet from the menu and went through the process that way, which involved entering my Wi-Fi password — out in the open.

With the switch installed in my attic — one of the farthest locations in my house from my Wi-Fi router — I initially found the switch slow to respond when I was using the app. However, this issue resolved itself after a few minutes, and the light turned on and off within half a second of the moment I pressed the button in the app.

Within the app, you can create such scenes as Home, Away, Sunrise and Good Night to have the lights turn on and off automatically. I liked that I could have the plugs turn on automatically at sunset, or off at sunrise. Very few other smart plugs have this ability, though Lutron's Caseta smart plug also lets you set a delay.

Other conditions for which you can automate Aukey's plugs include temperature, humidity, weather and air quality. So, for instance, if the local temperature exceeds 85 degrees, you could have Aukey's device turn on and activate an air conditioner or fan plugged into it.

Two things it lacks are geofencing, so you can't set the plugs to turn on when it senses you're home; and a vacation mode, which turns your lights on and off to make it look as if you're home. However, like most smart plugs, Aukey's will work with Google Assistant and Amazon Alexa, as well as IFTTT, so you could add that automation feature through those channels.

While it's justifiable to treat any budget gadget with a healthy dose of skepticism, in the case of the Aukey Wi-Fi Smart Plug, it's not warranted. Its setup process is a bit more involved than that of other smart plugs, but Aukey's Wi-Fi Smart Plug is inexpensive — you get two for the price of just one TP-Link HS105 (our top overall pick) — and it provides a good number of features for the price.