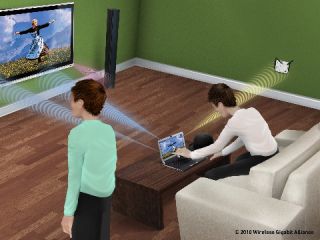 Over the weekend VESA chairman and WiGig board member Bruce Montag said that the 7 Gbps WiGig standard for Wi-Fi should be ready in just over a year. That means prototypes based on the ultra wideband, 60 GHz technology should appear in 2011, followed by commercial devices for consumers in the first half of 2012.

"How it rolls out is still to be determined," Montag said in an interview with Trusted Reviews. "The capability is there for it to be applied across a broad range and a variety of factors determine which products come first, especially with [low power consumption meaning] no barriers to implementing it in one product category over another."

Montag also admitted that WiGig won't be heavily branded, as the market will still focus on WiFi Alliance-branded products. Instead, he expects to see the WiGig spec and the competing 802.11ad spec from the IEEE (Institute of Electronics Engineers) to be in sync with one another. "The end user will be buying a standard with [WiFi Alliance] logo and certification which ensures they will be interoperable - that is the key in partnering with the WiFi Alliance," he said.

According to Montag, WiGig enables wireless synchronization of phones, tablets and PCs at gigabit or greater speeds. It also handles audio and video at the same time, allowing consumers to ditch VGA, DVI and HDMI cables without any data compromises.

"No need for compression, no limit on the types of applications," he added. "The way to think of this is really multi-gig WiFi that can do wireless HDMI, but also does data... it's why there's such strong interest from member companies."

WiGig was also designed to be backwards compatible from the start, using the new 60 GHz spectrum while also broadcasting over 2, 4 and 5 GHz bands used by wireless a, b, g and n. It's also low-power complaint, allowing laptops and smartphones to use the gigabit technology.

"If you look at the capability of WiGig, it is [further] differentiated by its support of such wide range of devices, especially low power" he said. "Bandwidth, display [WiGig is HDCP compliant], audio and data. Really no other spec, technology or standard does this."